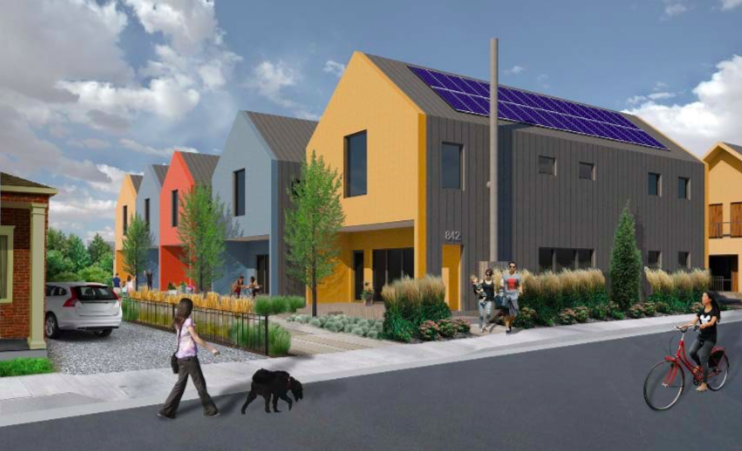 A mix of nearly 50 two-story single-family and townhome units on a quirky combination of lots is coming to the Jackson neighborhood in Fairpark, Salt Lake City. All on the interior of an existing Salt Lake City block.

The development will be built entirely mid-block, incorporating space from deep lots (previously zoned R-1/5000 and and R-1/7000) and “no-man’s land” abutting a private street. It is rehabbing and incorporating five existing structures (demolishing only two) and includes nearly 30 different landowners.

Those landowners were offered a value-add proposition: support a re-zone (to SR-3) and combine properties to take advantage of the new density. Two lots at R-5000 when combined can support 5 new units under SR-3 zoning.

SR-3 zoning’s purpose is to promote development in “the interior portions of city blocks” in a way that is “compatible with the existing scale, density and intensity of the neighborhood.”

Developer Dave Robinson of City Block LLC successfully petitioned the city for the zoning change to SR-3 in 2016, with every property owners’s consent.

The Hoyt Place development is at 250 North 900 West, barely north of the North Temple TOD zone. It is supported by significant retail to the south – Rancho Market and Walgreens at 200 North, and a wealth of businesses on North Temple, under 3 blocks away.

The surrounding zoning is North Temple TOD to the south, and single-family to the east, west, and north.

Hoyt Place’s density will be between 18 and 25 units per acre, depending how open space and alleys are calculated. That is typical “medium density” – in a neighborhood that has some of the most extravagant single-family zoning Salt Lake City has to offer.

Developer Robinson tells Building Salt Lake that half of his Phase 1 owners plan on adding a dwelling unit. That would push the number of units to the upper limits of what is considered medium density.

Parking ratios in SR-3 are a minimum of 1 stall per unit. Hoyt Place plans to offer tandem parking on the sides of its units, while encouraging owners to convert garage spaces to residential units. The street is being rebuilt by the developer, offering a 32-ft right-or-way with parking on both sides.

June 13, 2022
Walkability on the North Temple transit corridor at Redwood Road is about to take another hit with the addition of a one-story Starbucks coffee...
Read More