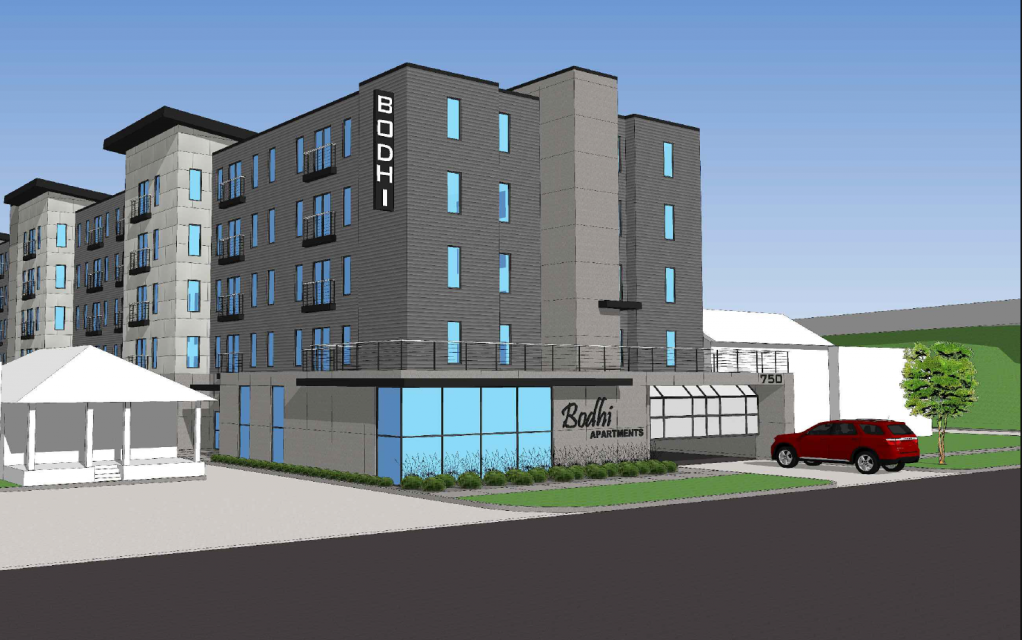 The Housing Authority of the County of Salt Lake is partnering with Missouri developers, the Vecino Group, to build the Bodhi, a mixed-income affordable housing project directly west of Interstate 15 on the 700 West block of South Temple.

Representatives from the Housing Authority and Vecino Group presented project details to the Poplar Grove Community Council Wednesday evening.  Several residents present at the meeting expressed concerns over more affordable housing coming to the neighborhood and referenced the neighborhood’s city council member, Andrew Johnson, prior vote against allowing the project.

“I don’t have any concerns with the Housing Authority,” said Johnson. “But we need more affordable housing in neighborhoods of opportunity.”

In March, the Salt Lake City Council voted 4-3 to approve a resolution allowing the county to develop the project in city limits.  Council members James Rogers and Erin Mendenhall joined,  Johnson in voting down the Bodhi development.

The project will be five stories and will consist of 80 residential units, 20 of which will be market rate with the remaining 60 units reserved as affordable units.  Of those sixty units, five units will be reserved for the chronically homeless, nine units will go to persons diagnosed with mental illness and nine will go to individuals with a mobility disability.  The remaining units will be reserved for individuals or families earning at or below 50 percent of the Area Median Income.

According to representatives from the Housing Authority, rents at the Bodhi will be lower because the county already owned the parcel and that upfront funding from federal low-income housing tax credits, state low-income housing tax credits from the Utah Housing Corporation and a loan from the Olene Walker Housing Loan Fund means that the project won’t have significant debt to repay.

The Salt Lake Community Action Program (SLCAP) will manage the project and will provide the on-site services.

The Bodhi apartments will occupy an area that is dominated by underutilized and vacant land.  The project will be separated is a block away from the growing mixed-use node surrounding the 600 West and North Temple intersection.  The project is a block west from the North Sixth development, that like the Bodhi includes a mix of affordable and market-rate units.  If the Bodhi is successful, the project could be a catalyst for growth directly west of the Interstate.

The project will be very transit friendly as it is in close proximity to two TRAX stations and a commuter rail station.  The North Temple TRAX and Frontrunner stations are two blocks to the east, while the Jackson/Euclid TRAX station is just over a block to the west.

Projects close to TRAX and Frontrunner lines must apply for a Transit Station Area (TSA) Development Review Score.  Developments must score at least 100 to avoid going before the Planning Commission for project approval.  The Planning Division gave Bodhi Apartments a TSA score of 157 and awarded the project maximum points for including structured parking, street frontage with high-quality materials, architectural detailing wrapping around the entire project, percentage of affordable housing and units per acre.

The project has the needed funding in place with construction expected to begin in the spring of 2017.