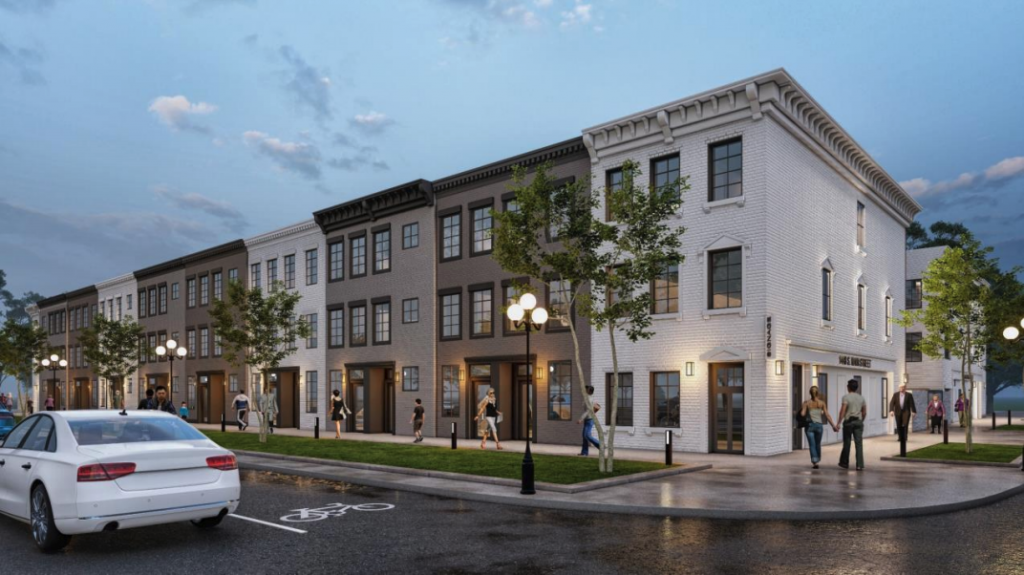 The neighborhood that has attracted the attention of developers looking to build “missing middle” housing just south of Downtown would become home to a Brownstone-style townhome development under a plan approved by the Planning Commission this week.

The chair of the Commission praised the project as one of the best she’d seen before joining the rest of her colleagues in approving the project.

The Gabbott’s Row development would bring another 40 housing units to the Ballpark neighborhood near 1448 S. Main St.

“I generally like about 3% of what comes before us,” said Amy Barry, the commission’s chairwoman. “Most of it is just really not raising the bar. But I really, really like this project. This is in my top 3%.”

The developer said he took care to pick finishes and a design style that he compared to the timeless buildings in Marmalade, the Avenues and on Broadway Downtown.

The result is a development that is clearly unique among an onslaught of new buildings in Salt Lake City.

But like most of the other thousands of units coming online, Gabbott’s Row (which was originally called Poet’s Row) will most likely be rental housing in a neighborhood that’s beginning to stir over an overabundance of rental housing and a dearth of owner-occupied units.

Granted, the entire region is attempting to build its way out of a severe housing shortage for both for-rent and for-sale. At the same time, fewer than 20% of Ballpark residents own their homes. That’s significantly less than the rest of the city. And in a neighborhood with high poverty rates and crime, local leaders told us they’d like to see more homes built that bring in more owners.

But James Alfandre, a co-owner of Urban Alfandre, which is a Building Salt Lake supporter, said what other developers have told us: the barriers of for-sale building make it much more appealing to build rental units.

“We’re adding missing middle housing to the neighborhood and [are] very excited about the design and affordability of Gabbott Row,” he said.

The building has its new name because it would be built in the Gabbott’s subdivision.

It was before the Planning Commission because the car-centric zoning throughout most of Ballpark requires 15-foot setbacks on all sides. Alfandre asked for approval to build the first of two buildings right up to the sidewalk facing Main Street.

The side setback also would be drastically reduced, from 15 feet required by CC zoning to 1.5 feet. The west-facing units would be buffered from nearby homes by a north-south alley.

Alfandre told commissioners he asked for the variance so that he could build bigger units and provide for two off-street parking spaces per home.

One commissioner said she feared the city was too easily setting a new precedent by changing the large and largely continuous front yard setback that pushed most buildings away from Main Street in Ballpark.

“I am concerned at our tendency to just go ahead and reduce these setbacks that are traditional along Main Street,” said Brenda Scheer, a member of the Planning Commission who ultimately voted in favor of the project. “You can see that every other property along there is set back where it’s supposed to be.”

“I wouldn’t make a fuss about this particular project,” she added, “[but] I think there’s a tendency for us to ignore the pattern historically that’s been set up along these streets.”

The second building would front an alleyway accessed off Merrimac Avenue, which Alfandre said would put eyes on the street and help with persistent crime issues in Ballpark. Parking would be accessed via a shared drive aisle from Merrimac or on the property’s southern end from Main.

Alfandre also asked for an additional 5 feet of height than what is allowed in the zone so that the units facing Main Street could have rooftop decks.

If built, Gabbott’s Row would be only the latest infill project in Ballpark, which has attracted  small- and mid-scale development thanks to lower land values, abundant industrial land and car-centric zoning that some view as easy to build in.