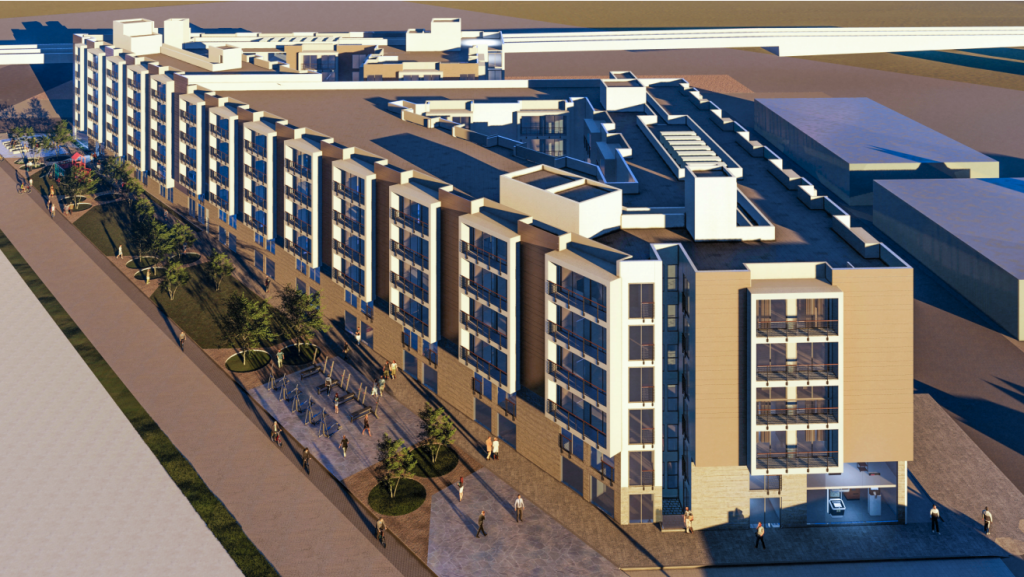 Builders are still being drawn to the 300 West corridor, continuing an ongoing residential build-out of what has historically been a commercial and car-centric part of Salt Lake City.

The latest proposal is a six-story apartment building that would bring 287 units to the area south of Central 9th in the Ballpark neighborhood. Add that to the 234-unit building proposed next door, and the San Francisco-based developer would add 521 new housing units to the area.

The newly proposed project, named the Bumper House, needs city approval for slightly more height. If both projects are approved, they would continue the sustained and intense interest in adding denser housing to neighborhoods throughout the city’s core.

The Chrome Works apartments have already won Planning Commission approval for a building that would be about 20 feet taller than what’s already allowed.

The Bumper House was originally to include underground parking, but the developer, represented by SMH Builders, said trouble with the water table requires adding two levels of parking above ground, and therefore a building that is 6 feet taller than what’s allowed by right in the General Commercial (CG) zone.

The two projects would replace a car junkyard near 270 W. Brooklyn Ave. at a time when the city itself is preparing to transform a large portion of 300 West into a complete street starting this year.

So, where is this, exactly?

The area is part of the Ballpark neighborhood, which has attracted moderate-density condo and apartments of late.

But it is also close to the eight-block area known as Central 9th. The compact district, with its transit options and urban zoning, has seen its own rapid buildout in recent years.

The Bumper House and Chrome Works would be built in an area that is divided by the state’s oversized I-15 off-ramp near 900 South.

It doesn’t have the benefit of being rezoned out of the car-centric CG zone. But developers clearly see the value of adding density to both 300 West and on infill land close to Central 9th.

Bumper House and Chrome Works are only the latest projects proposed along the 300 West corridor, where new apartments are being added alongside the entire street throughout the city.

In advance of the residential influx, Salt Lake City is completely overhauling the street. For the first time, it will have continuous sidewalks. It will have a two-way cycle track on the west side of the street.

The city hasn’t planned a crossing at Brooklyn Avenue as part of that project. The Bumper House renderings appear to show people biking on a trail along the vacant train tracks running past that and the Chrome Works properties. But there is no trail to ride or plans to build one.

More details on the Bumper House

It’s not immediately clear how many parking stalls on the two levels of above-ground parking would be provided with the Bumper House. The developer said parking “will be provided in the 2:1 ration mandated by CG zoning,” but the project materials show space for 145 stalls.

SMH Builders said it needs to go through the design-review process because it can’t build underground parking as it once hoped.

“We learned that environmental concerns are suggesting that our planned basement parking may not be advisable, due to the water table level,” SMH wrote. “Therefore we are requesting Design Review to approve that we raise the building height from 60 to 66 feet.”

Buildings this tall are allowed in the CG zoning, but they need to go through the design review process. The Planning Commission would have to agree that the additional height improves the project.