City deviates from original plan for the 300 South Bikeway extension 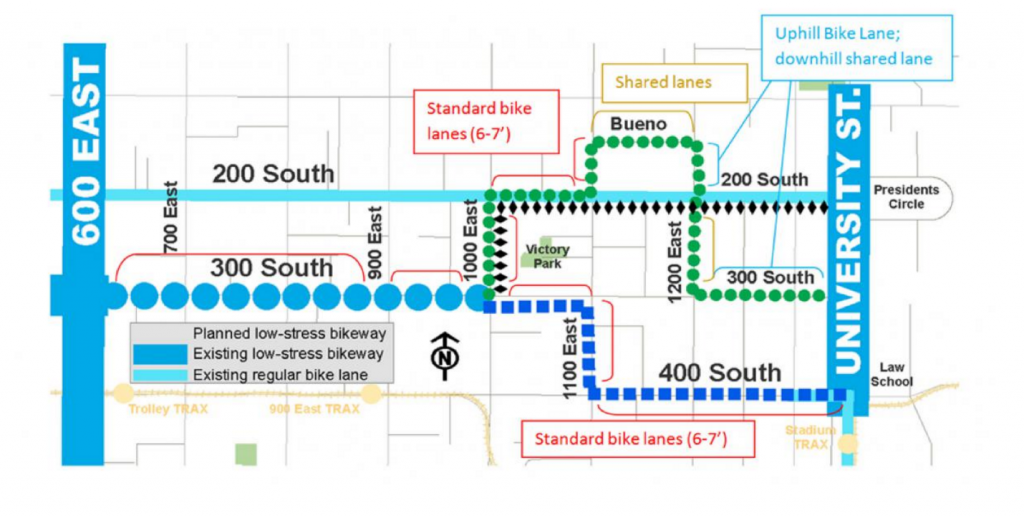 Unlike the downtown stretch of 300 South, the extension will not include protected lanes.  The 300 South protected lane uses parked cars and a concrete barrier to protect cyclists from traffic.   According to the city, the project will add new paint-only bikeways and install signs along portions of 300 South, 400 South, 1000 East, 1100 East, 1200 East, and Bueno Avenue.

While the construction should have less of an impact to residents than the construction of the first phase of the 300 South bikeway, some residents and cycling advocates are decrying the city’s deviation from the original plans that would have extended the protected bikeway.

“We are pleased to see that the route will be constructed. It will be a great addition to Salt Lake City’s bike route network and an important connection to the most popular commuter destination in the state – The University of Utah,” wrote Dave Iltis in an editorial for Cycling Utah.  “We are however very dismayed that the plans for 300 S. are not following the recently passed Pedestrian and Bicycle Master Plan.”

The Pedestrian and Bicycle Master Plan was passed by the City Council in 2015 under the previous mayoral administration.  The plan calls for making streets more complete (designed for pedestrians, cyclists, transit and traffic) while expanding the bikeway network with low-stress bikeways.

In the master plan, the city defines low-stress bikeways as “multi-use paths, protected and buffered bike lanes and neighborhood byways.”  According to the city, “surveys show that 50 to 60 percent of people say they would like to bike more but are deterred by conventional bikeways.  Development of a low-stress bikeway network is a key component of this master plan.”

The new striping design will start at 600 East, the terminus of the protected bikeway.  From 600 E. to 1100 East, the city will include one lane of traffic in each direction and bike lanes that will run between traffic and on-street parking.  The lanes between 600 E. and 900 East will be reduced from four lanes to three lanes, with a turning lane at the center.

The other blocks along the route include either bicycle symbols or bike lane striping with no widespread changes to parking or travel lanes.

The other blocks along the route will include either bicycle symbols or bike lane striping with no widespread changes to parking or travel lanes.  The bikeway between 1100 East and the University of Utah will include an uphill separated bikeway and shared lanes (the bike shares the lane with traffic).

In online documents, City officials refer to the entire proposed bikeway as low-stress, even though the language in the master plan suggests conventional bikeways are a deterrent for cyclists.

Itlis wants the city to remove the center turning lane between 600 and 900 East to allow room for a protected or buffered bikeway up to 1100 East.

“With the recently passed resolution to drastically cut Salt Lake City’s carbon emissions, city planning that puts people on bikes and on foot and in transit first and ahead of cars is imperative in order to meet our goals,” wrote Itlis.

The Salt Lake City Bicycle Advisory Committee will discuss the new bikeway during its monthly meeting on Monday, September 19 at 5 p.m. in Suite 150 of the Salt Lake City Transportation Division offices at 349 S. 200 East.

City officials expect the project to be complete by mid-November.