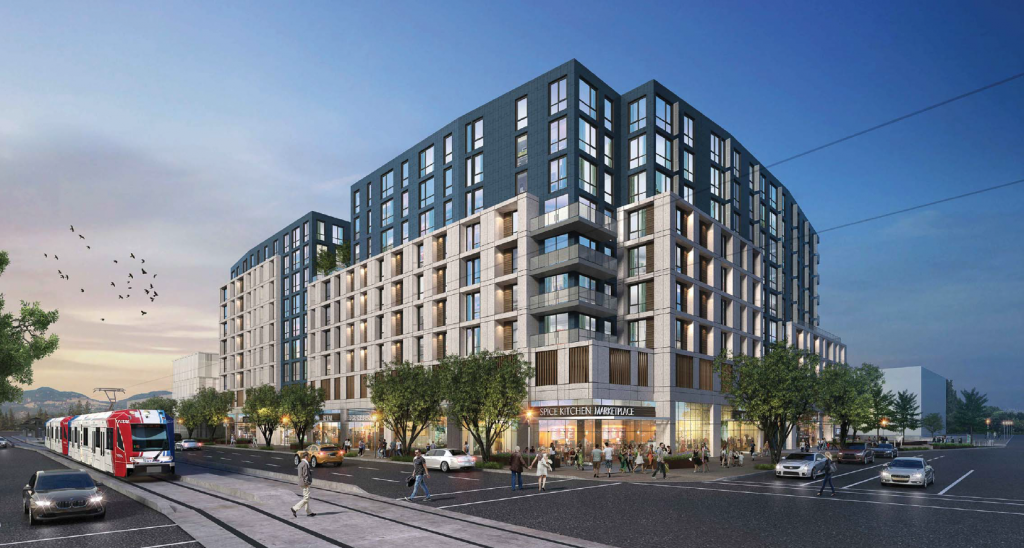 The selected proposal, called The Exchange, will cover 2.24 acres on the 300 East block of 400 South. The property formerly held Barnes Bank and Salt Lake Roasting Company.  The project calls for two buildings with a mix of housing, retail, coworking and incubator space.

The site sits adjacent to a TRAX line and represents the city’s decades-long plan to bring more residential and commercial development to the area surrounding the Civic Campus, anchored by the Public Safety Building and the City Library.

“The Exchange, as endcap to Salt Lake’s iconic, multi-block civic square brought a unique responsibility to the design,” said Chris Parker, Giv Development Group executive director, in a statement. “We hoped to create a place that lived up to that, one where people from all incomes and backgrounds could enjoy living, working, and being in.”

The Exchange will include a nine-story and five-story building, with 412 residential units, 20,00 square feet of ground-floor retail.  The project was designed by KTGY Architecture + Planning and will be mixed-income with 196 affordable units and 216 market-rate apartments.  The nine-story building will consist of seven floors of residential space above a two-story parking podium and ground-floor retail that will front 400 South.  The ground floor retail will be anchored by an international food hall and marketplace in partnership with the International Rescue Committee’s Spice Kitchen business incubator program.

The five-story building will consist of micro residential units above a parking podium and the “The Shop at Salt Lake City,” a 30,000-square foot co-working and business accelerator space.  According to the mayor’s office, The Shop will offer amenities and programming aimed at stimulating entrepreneurship, small business development and community engagement.

The Exchange is the second mixed-use and mixed-income project in public/private development.  Two blocks to the north of The Exchange is the site of the proposed Violin School Commons.  That project, which includes the adaptive reuse of the former Public Safety Building (Northwest Pipeline), will include two new construction buildings and conversion of the Northwest Pipeline building into a mixed-use residential building.

The Violin School Commons will consist of 248 residential units that will serve a range of income levels, from market rate to supportive housing.  The development team consists of Cowboy Partners and Form Development.  The developers are working to secure low-income housing tax credits before breaking ground.

The developers hope to break ground on The Exchange, fall of 2018.