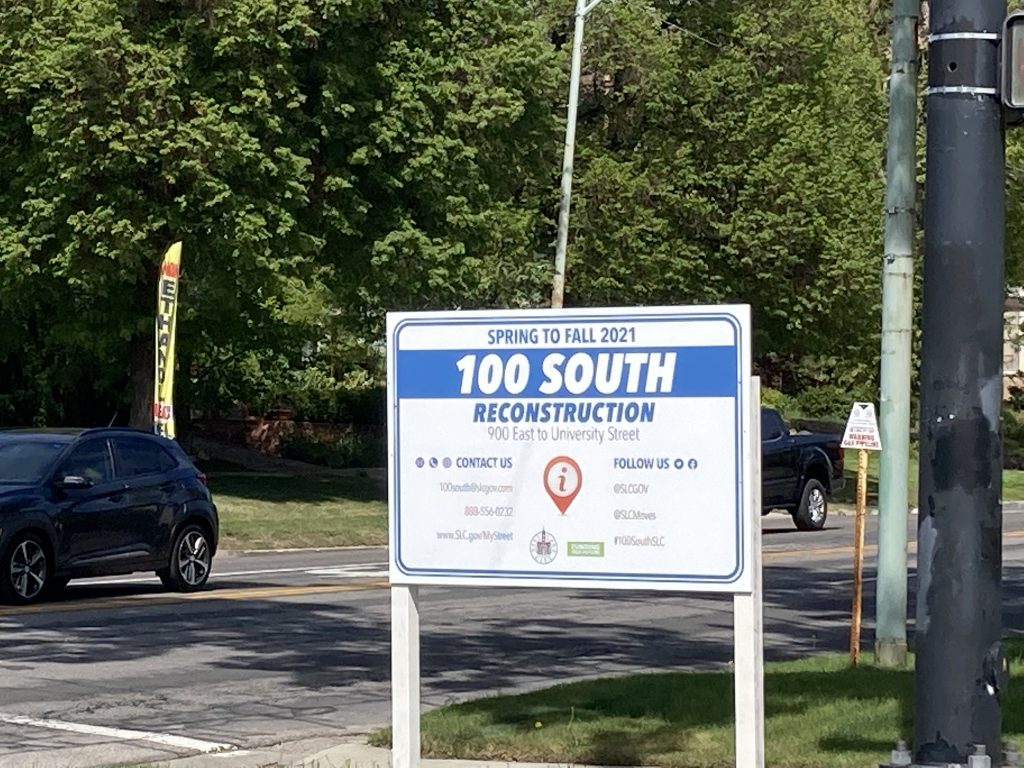 What happens if a city doesn’t follow its own laws? Not an outdated, inconsequential ordinance but one that is directly linked to public space, personal safety, freedom of movement, and environmental health?

In late May, the Salt Lake City Attorney’s Office was served with a citizen complaint that it violated its Complete Streets ordinance (14.06) when it redesigned and reconstructed the east end of 100 South this spring, the portion closest to the University of Utah.

The ordinance requires the city to install facilities for people walking, biking, and needing accessibility when streets are constructed or reconstructed.

The new 100 South is unfortunately a lot like the old one: two car lanes each way with no center turn lane and no bike lanes. The city re-established the same 30 mph speed limit that many drivers have a hard time not exceeding. Small improvements for pedestrians were made.

After filing public records requests for emails, meeting minutes, and supporting data for official decisions, Building Salt Lake was able to review the citizen’s complaint while monitoring the Mendenhall Administration’s response to public comments that the city was violating its own ordinance.

Our review concludes that the city, recently progressive in designing multi-modal streets, clearly broke its own ordinance. The reasons it gave were turgid and contradictory. The question remains, why?

Dave Iltis, publisher of Cycling Utah and Cycling West magazines, sounded the alarm in late 2019 in an editorial and advocacy alert. At that time, city engineers were floating their design with the Transportation Advisory Board (TAB) and asking the public for input.

It didn’t include bike lanes. This flew in the face of city policy – to install bike lanes on all local streets considered collectors – and city ordinance 14.06.

By January 2021, the city’s Transportation Division had drafted a memo defending its decision and denying it was breaking the ordinance. The statement, by Jeff Gulden, a senior transportation engineer, was panned by Iltis, who says it “falsely claims that the ordinance is merely a reminder.” Indeed, the Gulden memo states,

Gulden admits that his department violates the ordinance on “many streets”  “each year,” a statement that was corroborated in internal emails obtained by Building Salt Lake.

Emails among Transportation and Planning officials indicate that they were aware that “we violated the ordinance in the NWQ on the roads to the prison.” The commercial build-out of the Northwest Quadrant light-industrial area, now encompassed by the Inland Port, is proceeding rapidly with a warehouse construction boom serving supply chains and the home delivery segment of the economy.

The city has recently changed its standards for roads in the Northwest Quadrant, erasing many of the normal requirements for streets in the city’s grid and scrapping complete streets design.

The Gulden memo is extreme, denying that any mandates exist in the ordinance. Instead it asserts that ordinance language is only a “reminder” to planners and engineers to consider “pedestrians, bicyclists, transit users, and motorists” in design and implementation “as fully as possible given the specific project conditions and constraints.”

The memo contends that authoritative guidance is to be given by master plans, a stipulation found nowhere in the ordinance. Coincidentally perhaps, Gulden finds that “The Pedestrian and Bicycle Master Plan does not identify bike lanes for 100 South (in much of  the project area).”

Whose interest might be served by maintaining four car travel lanes – and no bike space – on 100 South near the University?

In January 2007, his last year in office, Mayor Rocky Anderson issued an executive order to create complete streets, which the Deseret News described as “requiring all road projects –  new roads as well as major work on existing roads – to include accommodations for pedestrians and bicyclists.”

That order was made city ordinance in 2010, while this story’s author was on the city council.

It’s the type of ordinance where lawmakers bind the city’s administrators to specific policy outcomes. In this case, street design was the target. The council chose to place it at the very top of Title 14, “Streets, Sidewalks and Public Spaces,” and the wording is unambiguous.

The purpose statement of 14.06 opens with, “The benefits of bicycling and walking span across many aspects of our daily lives,” and then declares:

Its first General Provision is that “Bicycle and pedestrian ways shall be established in the city’s new construction and reconstruction projects in the public right of way, subject to budget limitations…”

“Shall” means, in this context, that city administrators are legally required to perform the action.

“Subject to budget limitations” was language that Becker Administration officials insisted be included in 2010 while the city council was codifying the executive order. The ordinance also requires city administrators to create a complete streets committee that would decide on exemptions, limited to cases where an accessibility rebuild was for some reason economically unfeasible.

What Transportation officials chose to do

Given the supposed cover offered by the Gulden memo, the city proceeded with rebuilding the street as car-centric as it was previously. It mirrored the pre-existing design: 12 foot car travel lanes, cars traveling well over the posted 30 mph, two vehicle lanes in each direction, no center turn lane, no bike lanes, and parallel parking on the curb most places.

The only improvements for people outside cars were bulbouts at four intersections to shorten crossing distances.

Iltis presented three options to the Transportation Division to make 100 South a complete street. The best, according to Iltis, would have been reducing the car travel lanes to one in each direction, adding a center turn lane and bike lanes. Commonly called a road diet, the street would have gone from its current four lanes to five (three car lanes and two for bikes).

The city refused to do any of them.

The reason? “100 South serves as a main east/west access to the University of Utah and the hospital campus that houses the University of Utah Hospital, Primary Children’s Medical Center, and the Huntsman Cancer Hospital. Maintaining four lanes for vehicle traffic is essential to support the daily and emergency access to these critical facilities.”

On first blush, this seems like a legitimate reason that might justify a design violating city ordinance. Emergency vehicles need maximum access to be effective first responders and life savers.

On closer inspection, this reason turns out to be completely bogus.

Iltis points this out in his complaint to the City Attorney, which highlights several ways the city’s decisions violated the Complete Streets ordinance.

“While the City did include some improvements for pedestrians, they included none for bicycles hence violating the ordinance. The addition of bicycle lanes and a road diet would reduce vehicle travel speeds and thus would have made it even safer for pedestrians.”

The city’s guidelines for road diets, Iltis asserts, “indicate that road diets should be applied when traffic volumes are less than 18,000 vehicles per day. Traffic counts on 100 S are 11992 to 14047, clearly in the range of a road diet.” Building Salt Lake verified those numbers.

If traffic flow after a road diet isn’t a problem, then what factors were driving the city’s decision-making?

The crux of Gulden’s memo is that “maintaining four lanes of vehicle traffic is essential to support the daily and emergency access to these critical facilities,” and thus the requirements of the Complete Streets ordinance are legitimately over-ruled.

Yet the Federal Highway Administration says exactly the opposite regarding law enforcement and emergency service response times. In a paper entitled “Road Diets and Emergency Response: Friends not Foes,” the FHWA points to research that shows that road diets significantly reduce crashes (anywhere from 19 to 47%) and actually help emergency response times.

“Multi-lane undivided roads [like 100 S] can be problematic for police and EMS responders, as drivers may not be aware of protocols for allowing emergency vehicles to pass. While drivers in the outside travel lane are typically able to pull over to the right edge, drivers in inside lanes often seem uncertain about where to go.”

In contrast, according to the FHWA, “Road Diets can significantly improve response times by allowing emergency vehicles to bypass traffic by using the center two-way left-turn lane. Drivers in through lanes can remain in place, leaving the [center lane] solely for emergency response vehicles.”

So the city’s deference to vehicles on 100 South isn’t due to the access needs of emergency vehicles – and transportation officials likely know this. There were other users mentioned in the Gulden memo:

“Maintaining four lanes for vehicle traffic is essential to support the daily and emergency access to these critical facilities.”

What’s really going on: ‘Daily access to these critical facilities’

We can only speculate why city transportation officials would expose themselves with such revelations.

Why risk the embarrassment? Inquires to Transportation Director Jon Larsen from Dave Iltis and the advocacy group Sweet Streets SLC (Disclosure: this article’s author is a co-founder and board member) largely went unanswered.

Internally in emails obtained by BSL, Larsen repeated talking points established in the Gulden memo. All, apparently, to protect the privilege of daily drivers to the University’s Medical Campus to speed up and down 100 South without having to deal with bikes on the street.

100 South is a city-owned road until it becomes North Campus Drive at approximately 1550 East, where it becomes Utah Route 282.

Was UDOT involved in strong-arming the city? The state agency has routinely created pedestrian and bicycle hellscapes on many city rights-of-way as they approach state-owned highways and Interstate on-ramps. (See for example 2100 South and 300 West; West Temple at 800 and 900 S; 500 and 600 South Downtown; the environs of 300 West and 600 North).

100 South is the main vehicular access to the north side of the University of Utah campus, which includes its Medical Campus and Intermountain’s Primary Children’s Hospital. 100 South also serves the Lower Campus’ administrative center, the Park Building, on historic Presidents’ Circle.

The university hosts seven parking garages in the area – some holding as many as 800 stalls – along with acres of surface parking lots.

Those parking spots serve faculty, staff, visitors, and students. While the University of Utah has been a leader in shifting students’ commuting habits – over two-thirds of students report commuting to campus in a mode not a car – other interests at the U. have been successful in bending the city to their will on 100 South.

What is it about “daily access to critical medical facilities” that points to University administrators and senior staff’s desire to drive fast and exclude other road users on their way to and from work?

The Gulden memo, with all its contortions and fabrications, also leaks some truths about power – the fragility of the public’s share when opposed by a privileged few.