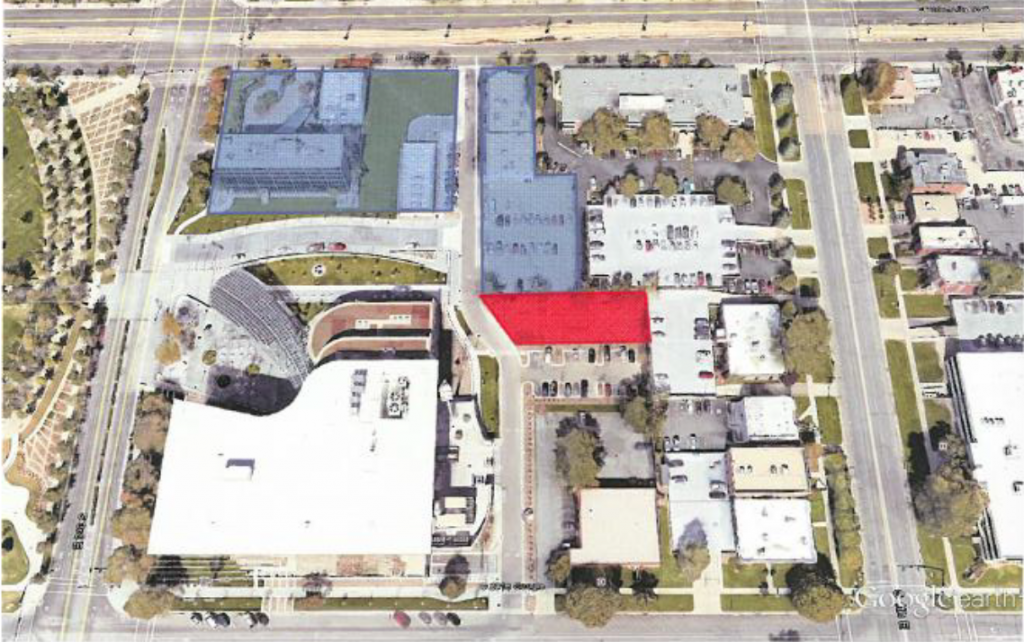 Salt Lake City leaders through the office of Housing and Neighborhood Development (HAND) are requesting a zoning change for a 10,736 square foot lot at the center of the 300 East block of 400 South.

On Wednesday the Salt Lake City Planning Commission unanimously voted to forward a favorable recommendation to City Council the request to rezone the parcel from a PL-2 (Public Lands) zone to a TSA-UC-C (Transit Station Urban Center core) zone.

The city originally included the parcel in the PL-2 zone as part of the Public Safety Building, but the city later deemed the parcel unnecessary to the project.  The lot is currently vacant.  The city argues that they need the rezone because the PL-2 zone doesn’t allow residential uses.

According to Todd Reeder, the city’s capital asset manager, the city is anxious to dispose of the properties for redevelopment.  The city has recently acquired the parcels to the north that include the Celtic Bank Building, the Salt Lake Roasting Company and a one-story commercial office building that houses the nonprofit, Sustainable Startups.  These parcels are zoned TSA-UC-C, which allows for building heights up to 10-stories and projects that encourage pedestrian activity and street engagement. Reeder told the Commission that the rezone of the remaining parcel will help the city relinquish ownership.

The city designated the area for higher density residential/mixed-use through the 400 South Livable Communities Project (Transit Oriented Development) adopted in 2012.   That project created the TSA (transit station area) zoning district that requires projects along 400 South to submit documents for a TSA development score that awards points based on building features that encourage walkability and are transit orientated.

Because the city is not directly developing these parcels, any current plans are temporary.   However, according to planning documents, the city envisions a transit-oriented development on the site that includes a mix of multifamily housing options and commercial space.  A site plan for the parcels shows a seven-story multifamily dwelling, a three-story commercial building and a four-story micro unit residential building.

The seven-story residential building is proposed for the northwest corner of the block (at the current site of Salt Lake Roasting Company) and would consist of five wood-framed floors above a two-story concrete podium.

City Council will need to approve the rezone before any final project plans or partners are announced.