The owner of the shuttered Coachman's diner unveils his surprise: a massive mixed-use condo building 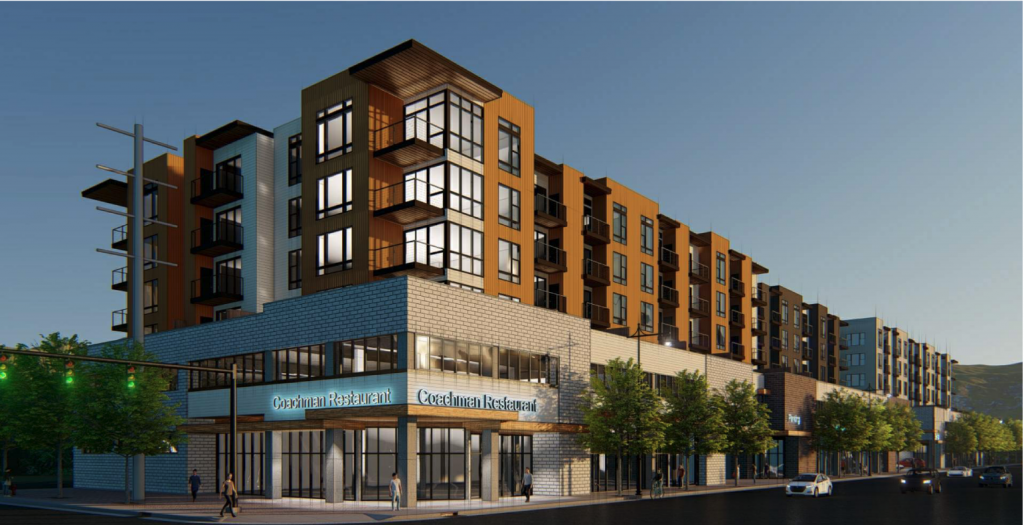 When Mike Nikols announced he was closing his family’s iconic diner at 1300 S. State St. and began lobbying the city to rezone his family’s nearly 2 acres of land, he kept details about his future plans for the site a secret. A pleasant surprise, if you will.

He successfully lobbied the city to rezone his suburban-esque properties to one of the most urban zones available, closed his family’s restaurant and kept quiet about the future of the vacant restaurant and office space.

Well, the cat is out of the bag.

“The project will have 1 bedroom & 2 bedroom condos to provide housing options to a broad spectrum of the market and encourage diversity in our tenants,” the developers wrote in documents filed with the city to start the Planned Development process.

This will be rare for-sale multi-family housing in an increasingly popular neighborhood for developers looking to add density. The walkable, mixed-use component make the proposal even more rare. Builders in the capital city have shied away from much more than ground-floor parking hidden behind glass with 3-5 floors of housing above.

While the sidewalks of the state-owned State Street are too narrow to encourage true walkability, the initial Coachman’s design has elements that weave it in to the surrounding car-dominated landscape.

Renderings show the building being bifurcated by driveways for easy access off US-89 into one of 243 parking stalls proposed for the new building.

Those driveways may help split up a facade that is more than 540 feet long.

Renderings show space for two restaurants and a storefront all facing State Street at ground level. One level of parking would be below-grade and another on the first floor, hidden from street view. All parking would be accessed from State Street, with a drive aisle on the building’s east end.

While the building’s corner on 1300 South and State is shown with 15-foot ceilings, the rest of the ground floor is designed with 8-foot ceilings, which is considered short for well-designed retail buildings.

None of the renderings show reuse of the classic Coachman’s diner sign that still stands on State.

The documents filed to begin the process with the city also don’t mention when the dozen or more businesses in Nikols’ State Street Plaza will be displaced by the development.

The new condo building would reside in Liberty Wells, in an area that is somewhat of a no-one’s land due to its status as a state highway with narrow sidewalks.

Nikols had the city change his properties from the car-dominant Commercial Corridor (CC) zoning to Form-Based Urban Neighborhood (FB-UN2). It is the more urban-intensive of the form-based zones on the city’s books.

City Council members hailed the rezone as a way to revitalize the area, and the rezone easily passed earlier this year.

Across the street, in the city’s Ballpark neighborhood, sits a gas station and convenience store on a plot called Wayne’s Corner.

For years, the site has been open ground for drug dealing and use and is known by police as a nexus for some of the troubles the area faces. Lately, though, Ballpark has worked with Salt Lake City Police and the owner of the convenience store to eradicate the problems using the city’s nuisance ordinance.

The Coachman’s development proposes adding more eyes to the street and a potentially permanent deterrent to the open crime.

That is, if it’s built and residents agree to buy and move in.

Want to help support local, independent journalism about your city? Become a member.