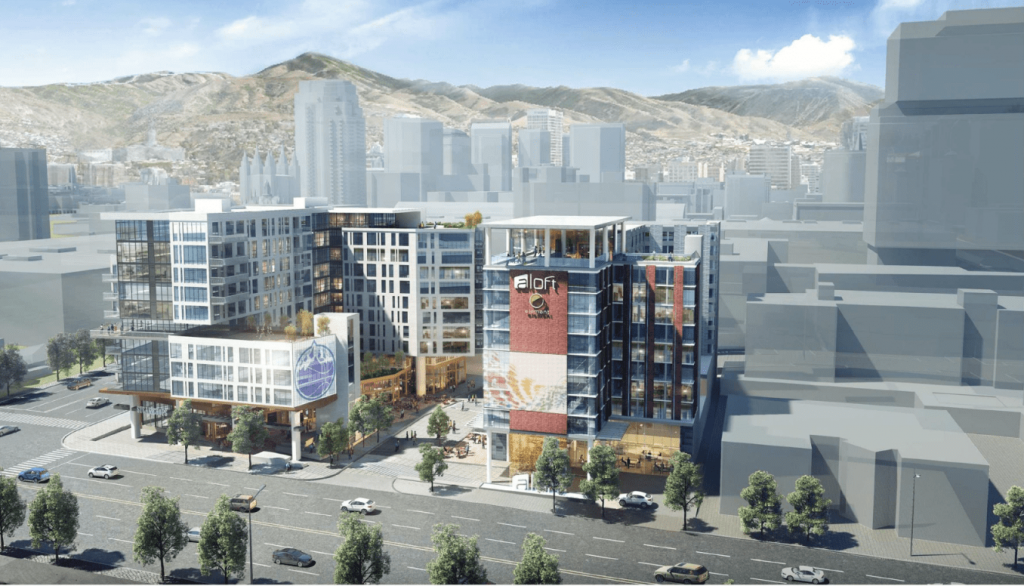 Developers, the Ritchie Group have ambitious plans to convert the 100 South block of 300 West into one of the city’s most vibrant downtown blocks but have hit some bumps that have delayed construction.  On Wednesday, the Salt Lake City Planning Commission approved an extension request of a previously approved Conditional Building and Site Design Review (CBSDR) and conditional use for the first phase of the proposed Block 67 development.  With the extension, the developers will have a year to secure building permits.

The developers will break up the large project into four smaller blocks via a curved throughway street that will connect 300 West to 200 South.

The approved first phase will focus on the redevelopment of Blocks A and B at the block’s northwest corner and will include two mixed-used buildings that consist of a mixed-use residential building and a double-branded hotel building.

The proposed street will be designed to accommodate both cars and pedestrians with traffic calming elements and formal and informal plaza space while also allowing for loading vehicles and through traffic.  The street will be programmable like Regent Street and will utilize a similar design that will allow the street to be easily converted into plaza space for events.

Despite the favorable recommendation, the developers may still seek the D-1 zone designation for the southeast corner parcels to allow them to build taller than 375 feet through a CBSDR.  Any zoning change will need final approval from the city council.

The developers are also seeking approval from the Redevelopment Agency of Salt Lake for county development funds to help finance a subterranean parking structure that would serve both the second phase buildings and provide public parking for downtown residents.  Before the council and RDA give any final approvals, the council has asked the developers to meet with a mediator to address concerns from the city’s Japanese American community about the project’s potential impact on several adjacent, community-owned buildings.