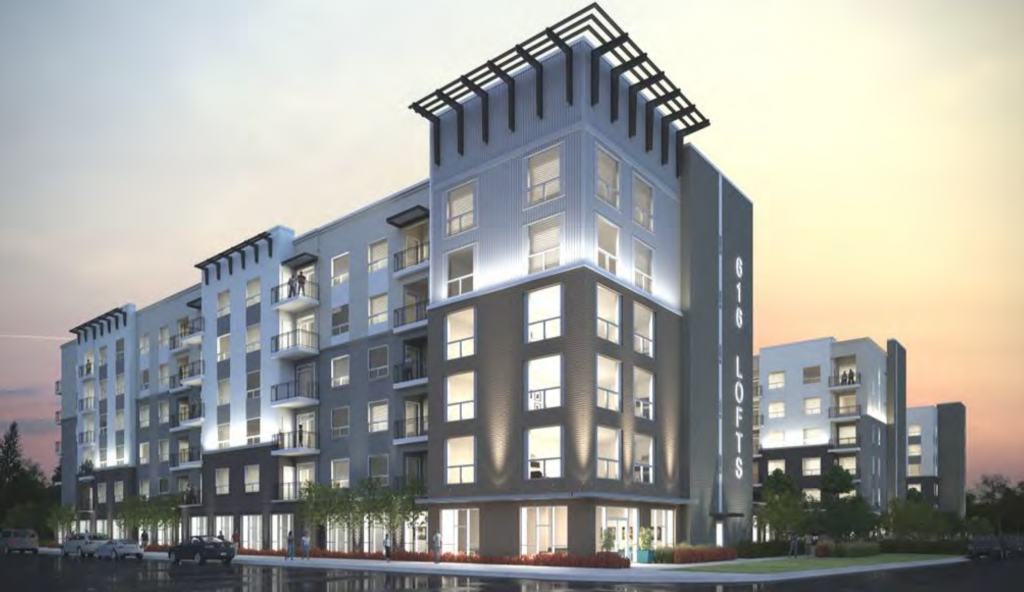 Now that winter is waning, warmer weather will kick off what could be Salt Lake’s busiest construction seasons in decades.  Kicking off the season is the 616 Lofts.  The construction fences are up as site development work has begun on the six-story residential mixed-use development at the southwest corner of the intersection at 600 South and State Street.

The project’s developer,  Wasatch Group, plans to build five floors of residential above ground floor commercial space and a parking structure.  The project will include 274 residential units that consist of mostly one and two bedroom apartments with some studio and three bedroom units available.  Just like another Wasatch project, the Providence Place Apartments at the intersection of 300 East and 100 South, all of the units will be income restricted.

The 616 Lofts will bring density and residences to a section of the city that is dominated by surface parking, hotels and car dealerships.

The project has similar setbacks and design as the Encore Apartments, another Wasatch Group development, with second-floor courtyards breaking up the building’s frontage along 600 South.  The project is 400 feet in length and will take up over half of the block on 600 South.  There will be four courtyards with two courtyards on 600 South and two fronting a private driveway directly south of the development.  Ground floor commercial space will front State Street, while the leasing office and fitness center will front 600 South.

Parking will be accessed from both State Street and 600 South.

The project replaces an underutilized vacant lot, that was previously the proposed site for a new Salt Lake County District Attorney’s office building.  The Salt Lake County Council issued a bond in 2010 to build the project, but debates over cost and design stalled the project.   The county eventually abandoned plans to build on 600 South deciding instead to build on newly acquired land directly adjacent to the Scott M. Matheson Courthouse.

Wasatch Group purchased the 2.3 acres 600 South property from the county last summer for just under $6 million.

The developer’s original proposal had almost no ground-floor activity, with ground floor parking and large glass windows lining the street-facing side on 600 South.  At the encouragement of Salt Lake City planning staff, the architects pushed the parking back from the sidewalk and replaced that space with the more active uses.

The conditions for approval require that the developers add a mid-block walkway along the project’s western edge and entrance awnings.  The landscaping will need to be water efficient and include street trees along the park strip.