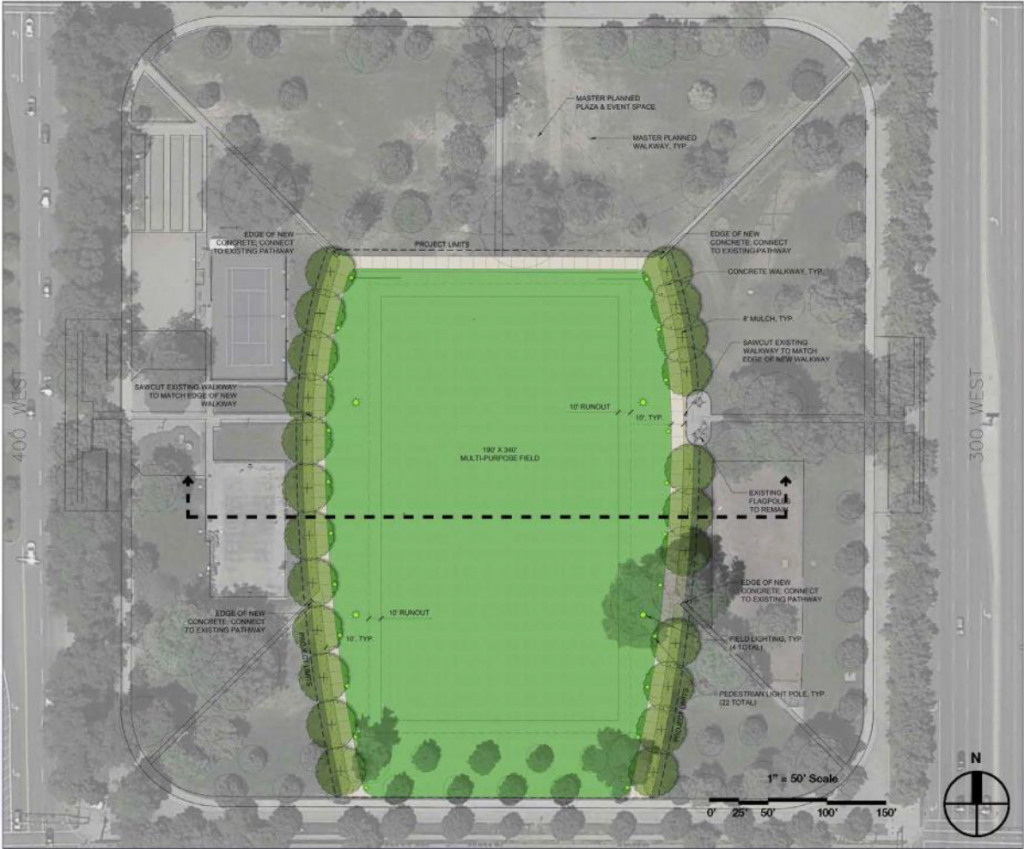 Pioneer Park is going to get some long-planned upgrades after outside support has allowed the city to move forward with the park’s redesign.  On Wednesday, August 1, city and downtown officials announced the construction of the park’s new elements that will include a multi-purpose lawn, new perimeter sidewalk and additional lighting.

According to city officials, the new lawn will occupy the lower center of the park with frontage on 400 South and will be slightly larger than a full-size soccer field, which will create a new recreation and event space. The field will also include lighting.

The city will also construct a ten-foot-wide concrete perimeter sidewalk with lighting around the new multi-purpose lawn to create an interior path for pedestrians and for farmer’s market booths.  The city will plan 24 sycamore trees along the sidewalk to frame the new lawn.

The new features will replace bathrooms, a squared concrete walkway and over 50 trees at the park’s center.

The $1 million project is a collaboration between Salt Lake City’s Parks and Public Lands division, Pioneer Park Coalition and Salt Lake City Redevelopment Agency.   The city’s Public Lands division secured $550,000 in Capital Improvement Funds but was unable to secure the remaining $450,000 needed to fund the project.  Earlier this year the Pioneer Park Coalition, a local group led by nearby property owners, announced that they would donate $300,000 to the park’s reconstruction.  In July, the city council acting as the Board of Directors of the Redevelopment Agency of Salt Lake City voted to provide the remaining funds.

During demolition and construction, a perimeter fence will be installed at Pioneer Park containing the construction site.   Officials promise that while the fence is up, other amenities throughout the park will remain available, including the dog park, playground and sports areas. The Downtown Farmers Market will continue as scheduled, to be held every Saturday through October 20, 2018.

According to a statement from the city, the park’s new design is based in part on Crime Prevention Through Environmental Design (CPTED) principles, which calls for using landscape design, natural surveillance and park activation to deter criminal activity.  Officials argue that these principles will help reduce crime by opening up sight lines and making a space inviting for positive uses. New lighting will extend visibility in the evening, discouraging illegal activity and allowing for after dark public occasions. The multi-purpose field will provide new recreational opportunities for small and large special events and athletic games that will help activate the park.

The park’s new design was developed through a three-year public engagement process that started in 2015 with a four-day design charrette led by the American Institute of Architects Urban Design Committee.  The city then worked with the Landon Group to continue public engagement before formally adopting a design that went before the Parks, Natural Lands, Urban Forestry, and Trails Board and the Historic Landmark Commission, that approved the final design in February 2018.