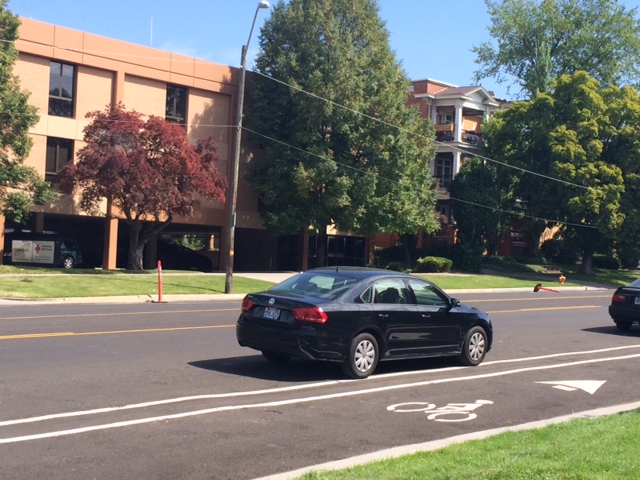 As voters decide whether to approve an $87 million Streets Reconstruction Bond that would go to rebuild many of the city’s streets, the Salt Lake City Council is exploring ways to ensure that any new street construction also helps expand the city’s transit and bicycle networks.

As currently written the Complete Streets Ordinance requires the city to review the inclusion of pedestrian, bicycle and other Complete Streets facilities before a street is built or reconstructed.  But there is no formal report or paper trail to explain how final decisions are made on which streets will get new bike lanes.

Council members initiated the process over the summer when they unanimously adopted a resolution to place an $87 million Streets Reconstruction Bond on the current General Election ballot.  At that time, council members expressed their concern that Mayor Jackie Biskupski’s Administration and future administrations would use vague language in the current ordinance to bypass adding multimodal infrastructure on new and reconstructed streets.

“Certain transportation decisions have been made through the lens of politics and not best city planning practices,” said the Councilmember Derek Kitchen.  “The last thing I want to see us do is to spend $87 million dollars and make decisions that don’t have best-planning in mind.”

Council members want to see a reporting mechanism that would require transportation officials to report back to the council on each complete streets decision.  Council has also requested that Transportation officials explore adapting the ordinance to include new multimodal options like e scooters and explore expanding more east-to-west complete streets that would better connect the city’s Westside to the rest of the city.

Transportation staff agreed with the council that revisions to the ordinance were needed to better enforce the goals of the Complete Streets Ordinance and accommodate increasingly diverse multimodal options, but told the council that having to report to the council on each project could become burdensome.

“We absolutely look at every opportunity we can to include bike lanes, and sometimes it doesn’t work out or doesn’t make sense,” said Transportation Division Director Jon Larsen.

Larsen acknowledged that sometimes his department gets caught in the middle of political battles.  He argued that most conflicts surrounding new or redesigned streets pit parking concerns against new bike lanes.

Council Chair Erin Mendenhall expressed the council’s concerns over the way some complete streets decisions have been made by the Biskupski administration.   “My hope is that we can find a way to achieve the tune-up that we seek prior to the bond vote happening and use that as a platform to build the rest of the review (of the ordinance),” she said.

Larsen told the council that reporting on just streets that don’t receive new bike lanes would be less of a burden then issuing a report on each street project.  He also echoed the need to revise the current ordinance and that it could be an opportunity to incorporate a complete streets agenda with the city’s form-based code districts to expand the city’s vision for enhancing walkability.

In a straw poll, council members voted to require transportation staff to come back to council at a later date with proposed revisions to the ordinance based on the national complete streets recommendations and new ways of reporting on new street projects in the interim.

“We need to tighten the Complete Streets Ordinance,” said Kitchen.  “This is more than bike lanes.”