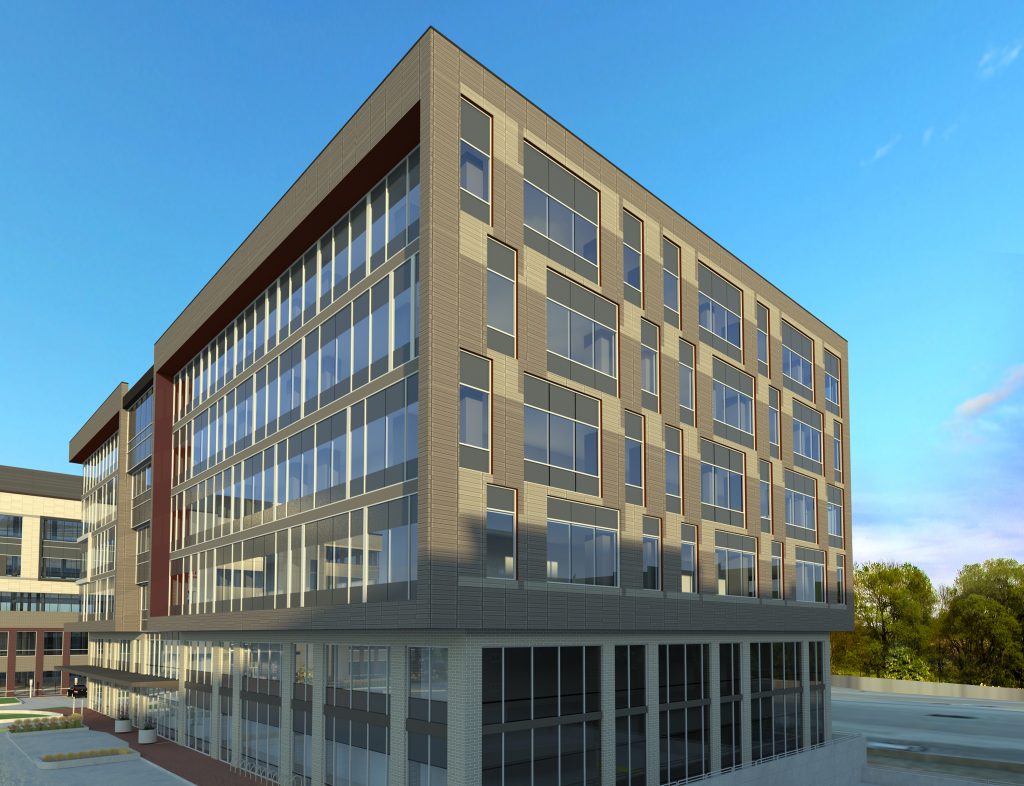 Salt Lake City has one less big box store.  Demolition work is underway on the Shopko in Sugar House, near 1300 East and Interstate 80.  The box store is being demolished to make way for a large mixed-use project.

The 9-acres Shopko site will be replaced with three buildings, two office buildings and one mixed-use residential building, and a parking podium.  The project, by developers Sentinel Development in collaboration with real estate investment company Westport Capital Partners, will be built in phases with the first phase consisting of the parking podium and an outpatient clinic for the University of Utah.

The project went through several revisions in the updated designs after months gathering feedback from neighborhood residents and stakeholders, and a work session with the Planning Commission. Final design updates included breaking up the buildings’ scale at the street level, several redesigns of building elements and adding more active uses along Stringham Avenue.

According to the developers, over 2,500 people participated in an online survey and the team made 150 visits to area businesses and met with the Sugar House Community Council and Chamber to gather input on how the community wants to see the area redeveloped.

“And as a result of this early community impact, we have a much better project,” wrote Judi Short, the land use chair for the Sugar House Community Council, in an email to Building Salt Lake.  “It looks a lot less like the business park in Cottonwood Heights around the I-215, and a bit more like Sugar House.  We had some things added to the original project that will hopefully make this a more walkable project, having something interesting along the new (old) Stringham Avenue to make people want to walk up and down, from the Medical Center or Office Building to the Sugar House Business District (SHBD) for lunch or shopping, or from SHBD up along Stringham to look at the proposed gallery space, some active uses along an otherwise dead street.”

The medical building will house a University of Utah health center that will offer full outpatient services, including the Moran Eye Center, primary care, radiology, urgent care and specialist services. The clinic will have a valet parking and horseshoe parking entrance to the west of the building atop the parking podium.  Because of the slope of the site, the clinic’s entrance will be accessible at grade from Stringham.

The ground floor of the University of Utah clinic will include a pharmacy, the Moran Eye Center and a deli.

The residential building will be built a later stage and will be a seven-stories with five wood-framed floors atop a two-story parking podium.  The building will consist of approximately 180 units.  The wood-framed levels will be setback at the podium level with retail space available at the north end of the building fronting Stringham Avenue.  The architects redesigned the residential building to reflect the art deco style that was common in historic Sugar House architecture.

Several commission members were concerned with the proposed window/podium boxes that the developers intend to place along portions of Stringham Avenue.  The intention of the boxes is to provide displays that engage at the street level while blocking views of the stairwells and other portions of the parking podium.

Developers have applied for a building permit to build the parking podium and outpatient clinic. Construction on the first phase should start later this year.

The developers had planned for several years to redevelop the Shopko site but were going to wait until the store’s lease ended.  The closing of the Shopko store allowed the developers to move forward on redevelopment plans much earlier than expected.  The closing of many legacy big box store brands, like Shopko, will open up many acres for redevelopment in a city that is running out of developable land.