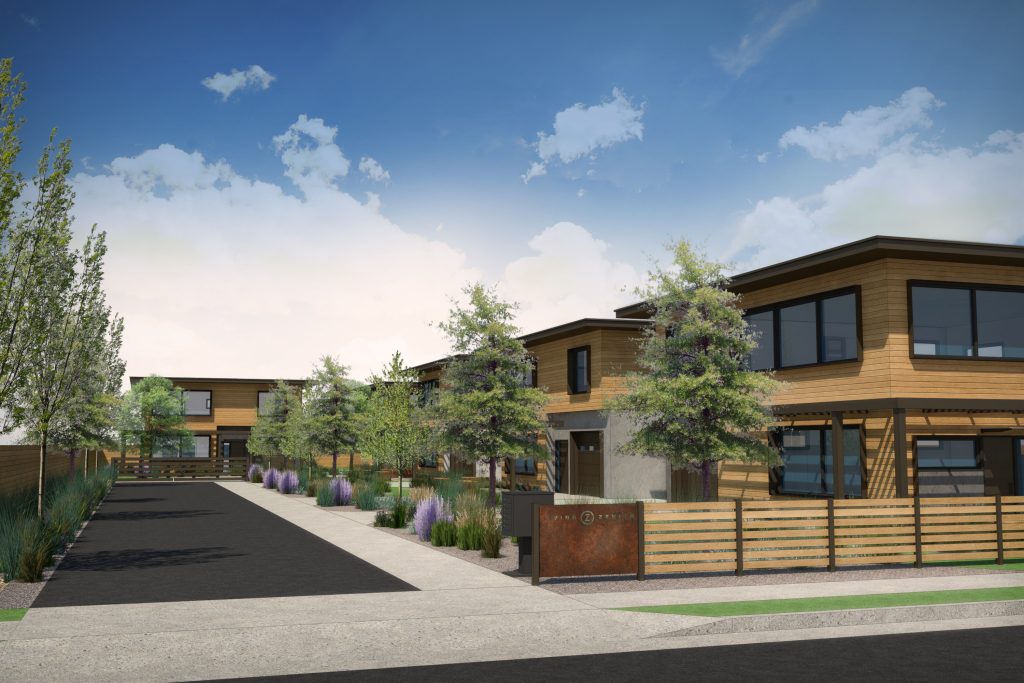 In terms of sustainability, Salt Lake City has historically been the leader in the state of Utah.  The city’s new Public Safety Building was the first net-zero safety building in not only Utah but in the country.   The city had the first net-zero mixed-use building, the Artspace Solar Gardens in the Granary District, and the first ever townhomes completely powered by the sun.  The city is again poised to have another first, the first net-zero single-family home community.

Developers, Redfish Builders, broke ground today on the Living Zenith, a proposed five home development on a 0.6-acre lot on the 1100 South block of 400 East.  As net-zero homes, the homes will produce the same amount of energy they consume each year.

“This innovative approach to homebuilding shifts Utah housing onto a green trajectory of energy-efficient new builds and retrofits,” said Mitchell Spence, the principal developer at Redfish Builders, in a statement.  “This isn’t just about the five homes we are building today, this is about changing our city.”

The developers brought several local leaders in the sustainability to speak at the groundbreaking including representatives from  the city’s Office of Sustainability, the Univeristy of Utah and Utah Physicians for a Healthy Environment.

Speakers referenced the need for cleaner buildings in Salt Lake and along the Wasatch Front.

“We have the technology to do it, but we need better building codes,” said Denni Cawley, executive director of Utah Physicians for a Healthy Environment.  “The days of business as usual are in the past.”

An estimated 40 percent of emissions in the Wasatch Front come from buildings.  Net-zero homes not only produce energy through solar panels but are built in a way to ensure that energy consumed is reduced through insulation and solar shades.

University of Utah School of Architecture Professor, Jörg Rügemer, worked as a consultant on the Zenith project.  Rügemer focuses on sustainable architecture and designed the “Field of Dreams” eco-community, a proposed 20 unit energy efficient housing development in Kearns.

Rügemer lamented that most developers in Utah build to code standard and instead focus on energy efficient appliances and HVAC systems which he argued is inefficient.  Instead of building to the minimal code requirements, Rügemer suggested that developers build projects the consume less energy through improved insulation and building materials.

The Living Zenith development replaces two single family homes that were demolished to make way for the new project.  Each home will have its own lot but will share a private driveway and pedestrian walkway that will connect each home to 400 East.  The homes will be two stories with 2500 square feet of living space and an attached one-car garage.

The developers will use an old shipping container as a mock net-zero home to educate neighbors on the materials and the process used to build energy efficient homes.  The mock-home will sit in front of the property while the homes are under construction.

Living Zenith is Redfish’s second recent community development in Salt Lake.  The developers built the Arlington Park townhomes, now referred to as Creek View, on the 1000 east block of 800 South.