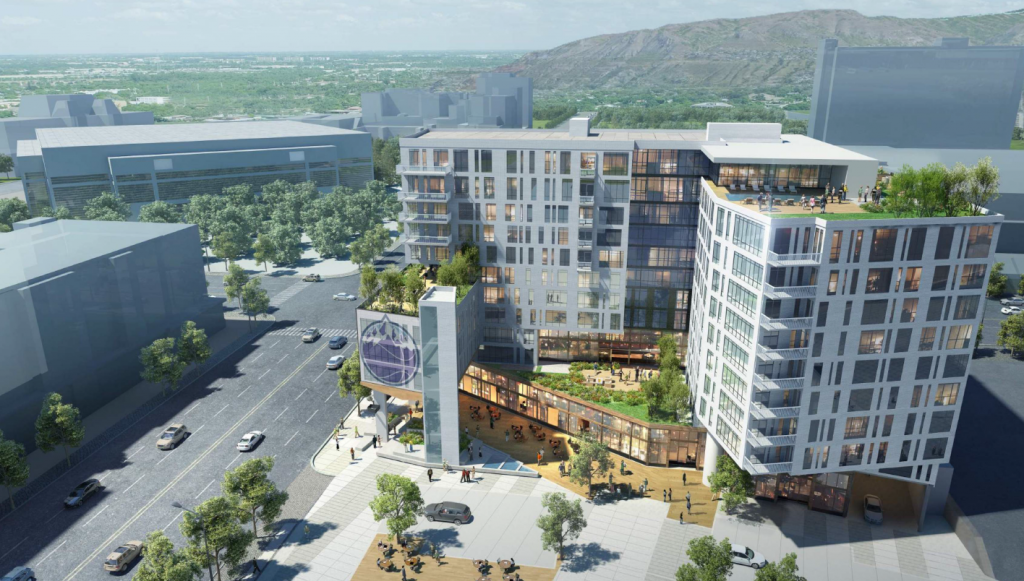 Block 67 in Salt Lake City has a storied history.  The block was part of the city’s Japantown, a vibrant neighborhood built by Japanese immigrants.  Most Japantown was demolished to make way for the Salt Palace Convention Center in 1967.

While the block houses the few remaining remnants of Japantown’s past, mainly the Japanese Church of Christ and the Salt Lake Buddhist Temple, large portions of it are dominated by surface parking and a suburban-style office building, the Royal Wood Plaza.Over 6 acres of underutilized land in downtown Salt Lake City are set to be redevelopment in a proposed four-building project by local developers,

But a proposed development by local developers, The Richie Group, could completely reshape Block 67 and help bridge a key vibrancy gap in downtown Salt Lake.  The development, referred to as Block 67, will consist at least four new buildings and a new mid-block street, with a mix of residential, commercial and office space and will occupy the northwest and southeast corners of the 200 West block of 200 South.

The project will be built in two phases, each phase consisting of two buildings.  According to city records, the developers are requesting approvals for a zoning map amendment for the second phase and a planned development and conditional use for the first phase.  Because of the size and the location of the proposed development, the developers need to go through the Conditional Building and Site Design Review (CBSDR) process.

The developers have started the CBSDR process for the first phase which will consist of two buildings occupying the northwest corner of the block at the intersection of 100 South and 300 West.   The first phase buildings will replace a surface parking lot and will be both 11-stories above ground with two levels of subterranean parking.  Both building heights will meet the 120-foot threshold allowed under the CBSDR.

The second building in the first phase will be a 271-room hotel with retail space on the ground floor. The hotel will be separated from the residential building by a new street that will connect 300 West to 200 South.

The second phase will include a mixed-use residential building with residential and retail space and a mixed-use building that will be a mix of residential, retail and office space.  The developers have yet to start the CBSDR process for the second phase as it will take some time to go through zoning amendment process which acquires a favorable recommendation from the Salt Lake City Planning Commission and final approvals from City Council.  The developers are requesting the zoning amendment because the mixed-use building, planned for the northwest corner of the 200 West and 200 South intersection, will exceed the allowable height under the D4 zone.  The second phase buildings will replace the surface parking, the Royal Wood Plaza and an adjacent parking garage.