Developers pitch next project to flesh out south Downtown 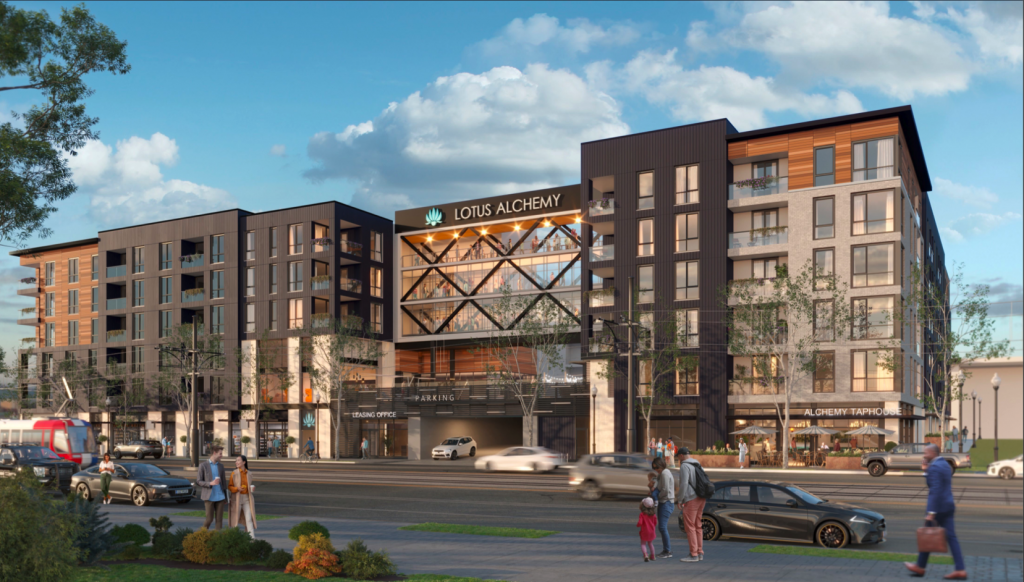 We now have details about the next project to move Downtown’s footprint south.

The project would bring 214 new homes with 10,100 square feet of retail space, including space for a restaurant and two spaces. There would also be a 1,400-square-foot lobby/leasing area.

The building, at 28 W. 700 S. between Main and West Temple, would bring another five-over-two building, with five levels for people to live and two levels to park their cars.

A seven-story building with a mix of one-, two- and three-bedroom housing units, the latest proposal by the Lotus Company would be only the latest in a string of new development having an impact on south Downtown.

Lotus submitted its plans as part of a design review, a process initiated because it’s asking to build past the 65 feet allowed in the Downtown-adjacent zoning area outright. Builders who want to go up to 120 feet tall can get permission through a trip to the Planning Commission. Lotus Alchemy will be 72.5 feet.

The developer is also asking for permission to exceed the maximum facade length of buildings allowed in the zone by nearly 50 percent. D-2 zoning allows for buildings up to 200 feet long, an attempt to promote walkability for passing pedestrians. Lotus is asking to build 293.5 feet.

“On the ground level the 700 South facade has multiple breaks, several material changes, and building massing changes,” the company wrote in its plans.

Renderings show the building split by a central parking access, an entry for the 256 parking stalls on site.

It appears Lotus is adding parking stalls for an existing adjacent office building to the west, noting that 75 of the 256 stalls are for the building at 669 S. West Temple. That would leave a parking ratio of 0.84 to 1.

It’s not clear whether the project would include any bike accommodations, as the plans were silent.

Residents will benefit from the creation of the new TRAX transit stop around the corner at 650 S. Main. And while the location isn’t as densely walkable as it might seem, the building itself and others coming online will begin to fill in gaps in the walkability of the immediate area.

What’s up in south Downtown?

The urban core of Downtown had always rapidly petered off as it hit the barriers created by a series of surface highways maintained by the Utah Department of Transportation, starting with 400 South and reinforced by 500 South and 600 South. (For their part, West Temple north of 900 South and State Street are also surface highways slicing through Downtown.)

But developers have been quickly moving past those barriers.

While some of these projects face a reality of bringing permanent residents and retail space onto these highways, they have already made an impact on expanding Downtown’s footprint.

Lotus Alchemy will abut 650 S. Main, a new office building fronting 600 S. Main St. Indeed, the two projects will in a way be connected by a mid-block walkway that’s called for in city plans and will run on the east side of the Lotus property.

It is across 700 South from the recently completed Seven02 Main Apartments. Lowe Property Group’s 6th and Main mixed-use building is nearby.

These projects are engulfing underutilized space that has long been held primarily as vacant land, surface parking or shuttered warehouses. (There is an art academy adjacent to the Lotus Alchemy proposal that is not a part of the project.)

They are pushing up against another gaping hole in south Downtown: the Sears Block. Intermountain Healthcare declined to provide details about what it plans to do with the land that includes 700 South to 800 South, Main to State Street.

Lotus officials had previously told Building Salt Lake they were excited about the prospect of a healthcare development on the site, given it would bring full-time jobs and foot traffic from employees.

Indeed, the company wrote in its submission about the central location of its project.

“The Lotus Alchemy will compliment (sic) the neighboring buildings by offering convenient housing within walkable distances to future tenant’s place of work,” it wrote. “The project will offer retail space for potential coffee shops, dry cleaners, and a restaurant space for both residents and the public to enjoy.”