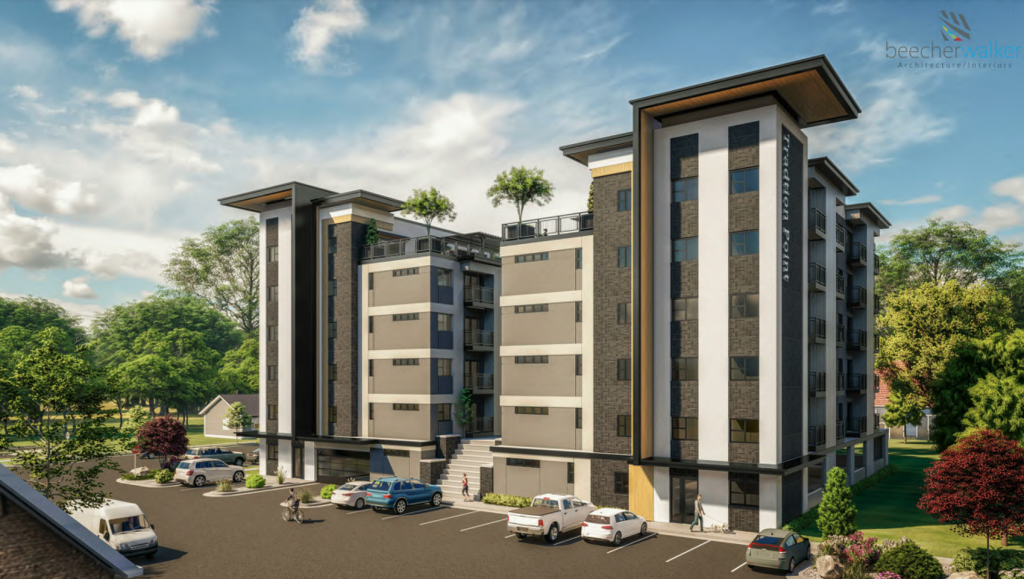 The area surrounding Smith’s Ballpark could welcome a new, seven-story residential building in an area that’s attracting attention from developers if not from policymakers.

Tradition Pointe would add 78 studio and one-bedroom units in an area near a transit station that’s still zoned commercial.

It would continue to add people into a neighborhood that needs attention from a planning division that doesn’t have time to properly plan for what could become a vibrant node for the city.

Because Tradition Pointe, at 1425 S. Jefferson, would be adjacent to existing Park Vue Apartments, its construction would fit in with the neighborhood’s fabric.

It will also receive attention from the city’s Planning Commission, because the developer is requesting permission to build higher than what’s allowed by outdated zoning in the area.

It would add five levels of residential units — 53 one-bedroom and 25 studio — above three levels of parking providing 75 off-street stalls. One level of parking would be underground and two above.

“The exterior materials are thin brick, cement board siding, stucco, a wood finish metal siding, and architectural finish concrete,” the developer wrote in a design-review application, which is required because the building would be taller than what’s allowed in the CG zoning despite its close proximity to a popular transit hub.

The city’s ballpark, home to a triple-A baseball team, has failed to attract attention and resources from administrators at city hall and from policymakers on the City Council. The city owns the parking lot that sits vacant for the vast majority of time.

The area has been plagued with violent crime in recent years, with numerous murders within blocks of the stadium, and neighbors have pleaded with the mayor and Police Chief Mike Brown for years to intervene.

Still, some developers have found commercial zoning to be welcoming, and have quickly added hundreds of units to the Ballpark neighborhood.

The Colmena Group, which is planning to develop a full city block known as the Sears Block, also owns a large and vacant warehouse just northwest of what would become Tradition Pointe. That building, too, is zoned commercial and includes height restrictions and parking requirements despite bordering the Ballpark transit station.

It’s possible that the quick addition of residents could bring more eyes onto the street and therefore more attention onto problems that exist in what otherwise is a vibrant neighborhood with restaurants, bars, office space and housing both old and new.

The developer has suggested including some amenities for residents in the proposal, which would require city approval before any construction.