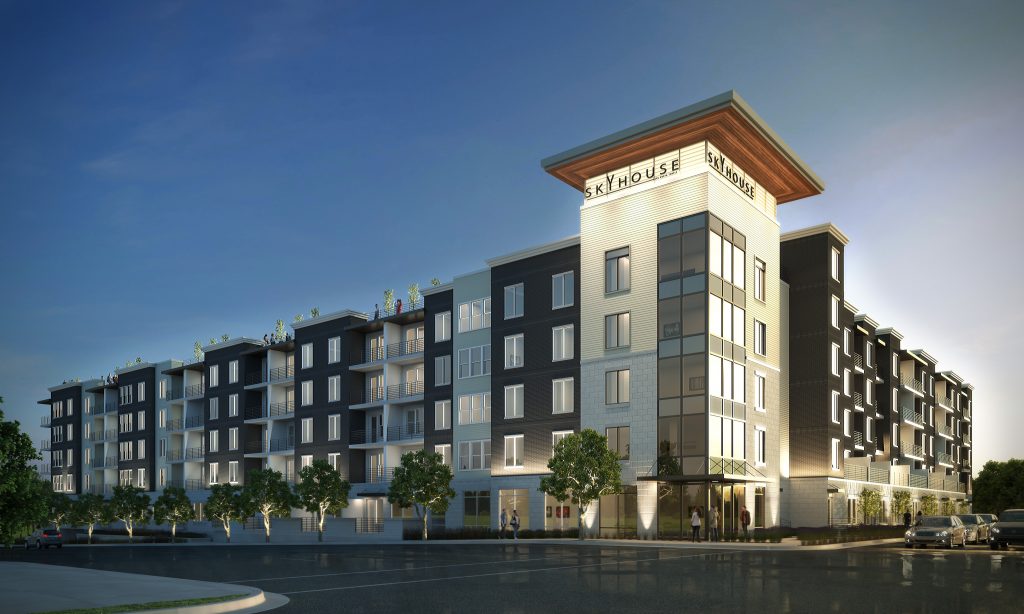 Change is coming to 300 West block of North Temple, a long-underutilized block that serves as a gateway to downtown.   In February demolition work began on the suburban-style former North Temple Inn and now construction is actively underway on a large multifamily project that not only now has an official name, but the developers recently released an updated design that moves away from the beige dominated palate in the original renderings.

The project, called Skyhouse, will be six stories, with four floors of residential units above a two-story parking podium.  The project will have 240 market-rate units with a unit mix of 29 studios, 127 one bedroom and 84 two-bedroom apartments.

Even with an updated design, the development won’t be mixed-use and will still only have active street engagement at the building’s corner fronting the intersection of 300 West and North Temple.   The project includes 13 ground floor units on both 300 West and North Temple that will separate the parking structure from the sidewalk, but those ground floor units will face away from the street level with interior entrances and the rear patios fronting the sidewalk level.

To accommodate the ground floor patios, the project will not be built up to the sidewalk but will instead have a 10-foot landscaped setback to provide rear patio and small garden space for the ground floor units.

The updated rendering shows a move away from a beige and brown colored brick exterior to a dark and light gray and white exterior.  In the updated design several architectural details are more prominent, including a more distinct crown and setbacks and color gradation that break up the building’s massing.

Another significant design change is the opening up of the ground floor patios to the sidewalk.  The original design had a brick wall separating the patios from the sidewalk.  With the updated design, that wall barrier will be broken up with patio railing that will enhance the transparency on the ground floor.

A reception area, two offices and a conference room will occupy the southeast corner of the building at the intersection of North Temple and 300 West.  According to the project’s architect, Guillaume Belgique of Architecture Belgique, amenities include a clubroom, fitness center, an entertainment lounge, two interior courtyards and a 9,000 square-foot rooftop plaza.

The two interior courtyards will be at the second podium level with all four floors of interior residential units looking out to the courtyard.   The rooftop plaza will overlook North Temple.

The project was one of the several projects in the Transit Statio Area (TSA) zone to receive a development review score during a six-month moratorium on approving new projects in the TSA zone.  Under the TSA development review process, developers may bypass Planning Commission approval if their project receives at least 100 points on a development score sheet that awards points for transit and pedestrian friendly design features.

The Salt Lake City Council voted to update the TSA process last year after several projects were approved that had little or poor street engagement.

The project will have 265 parking stalls, with a 1:1 parking ratio and with 10 electric car charging stations.  The development is a block from two TRAX stations, the Arena Station on South Temple near 300 West and Guadalupe Station on the North Temple viaduct.

According to Belgique, the original color renderings don’t reflect the project’s updated design. Instead of the lighter brown brick in the renderings, the final design will use dark gray brick with white stucco, and light gray siding.

Construction should begin after the demolition is completed.  According to city records, the developers have received their needed building permits.