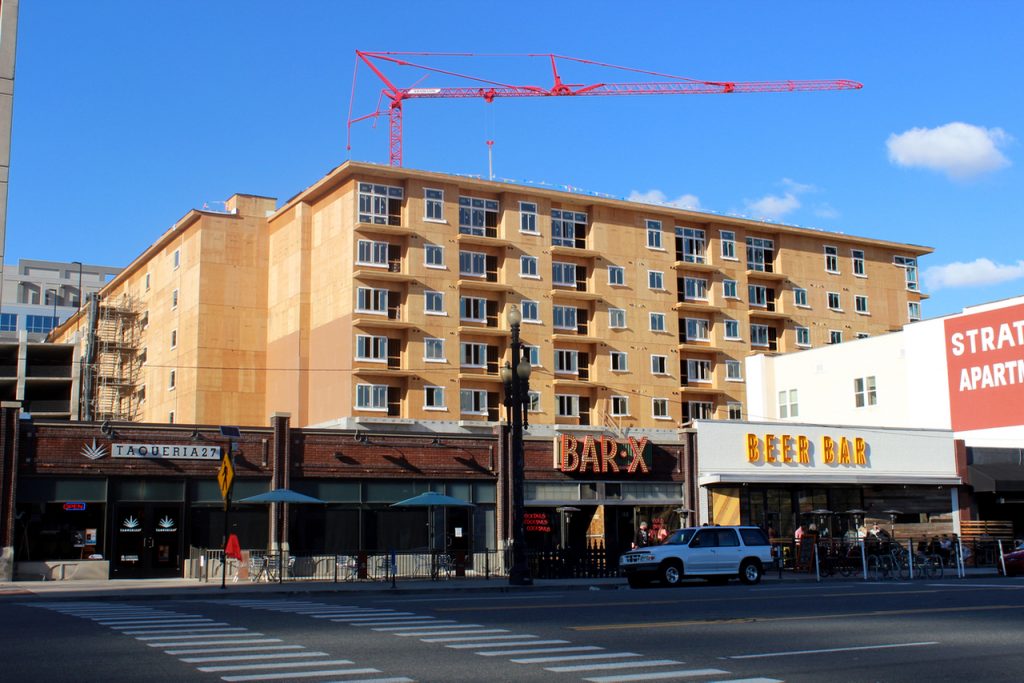 Downtown Salt Lake is maintaining the steady growth of the past decade according to the newly released 2016 State of Downtown Economic Benchmark Report by the Downtown Alliance and commercial real estate firm, CBRE.  The report, created to assist downtown stakeholders, shows continued growth over the last year in employment, housing, entertainment, dining and retail downtown.

But even with those gains, Jason Mathis the executive director of the Downtown Alliance notes there are still some weakness that downtown needs to overcome, especially with housing.

“People want to live downtown,” said Mathis during a Thursday media roundtable.  “(But) affordability and availability remain a barrier.”

Mathis referenced a June 2016 survey by the Downtown Alliance and Lighthouse Research that showed that 21 percent of respondents from the four major counties along the Wasatch Front (Salt Lake, Utah, Davis and Weber) said they would like to live downtown.

The combined 2015 population estimates for the four county region is 2,262,207.  Based on the survey results, that means an estimated 475,063 people desire downtown living.

Millennials (people aged 18-34) were the most likely to desire downtown living.  Based on the survey data, 44 percent of adults between ages 18-24 said they want to live downtown.  The number drops to 21 percent for adults 25-34 years-old, the second highest age group to express interest in living downtown.

Last year, Dr. Arthur C. Nelson, a professor of Urban Planning and Real Estate Development at the University of Arizona and former professor of City & Metropolitan Planning at the University of Utah, told a group of downtown stakeholders that in general downtowns will attract between 1 and 2 percent of the metro population.  For Salt Lake, with a metro population of 1.2 million, Nelson’s theory suggest that there is a market demand for downtown housing for 12,000 to 24,000 people.

Salt Lake’s current downtown residential population is around 5,000 a fraction of the thousands that said they would like to live downtown.

Downtown Salt Lake continues to be the largest per capita employment center in the state with an estimated 74,150 people working in the 500-acre downtown core (the soon-to-open 111 Main will add between 3,000-4,000 new workers).  While office workers make up the majority of downtown employees, the largest employment growth over the past two decades has been in the retail and services industry (restaurants and hotels).

According to the report, in 2015 there were 13,250 employees that worked in retail and the service industry in downtown Salt Lake, 17.5 percent of total downtown workers.

A single worker with a yearly salary of $25,000, just under the average wage for retail and service workers, is at 50 percent of the Area Median Income (AMI) and would qualify for affordable housing.

A single worker earning between $30,000 to  $40,000 a year would qualify for affordable workforce housing reserved for those earning between 60 to 80 percent of the AMI.

There are four market-rate residential projects under construction within the downtown boundaries defined by the Downtown Alliance (600 West to 300 East and North Temple to 500 South).  Those four projects: Alta Gateway, Liberty Crest, 360 Apartments and the Paragon Station Lofts will add 643 units to the market, filling just over ten percent of the city-wide estimated market rate supply gap.

There is just one affordable housing project under construction near downtown, the 616 Lofts.  That project, located just a block outside of the downtown boundaries at the southwest intersection of 600 South and State Street, will add 274 affordable units to the market.

While the housing supply gap continues, there are thousands of units expected to be completed within the next few years.  Building Salt Lake estimates that there are 2,487 residential units actively under construction and another 1,534 units that should start construction soon with building permits already approved or in the approval process.  The majority of new units under construction are within in close proximity to downtown.  Excluding the 643 units being built in the central business district, there are another 1,454 units being built in within two blocks of downtown.