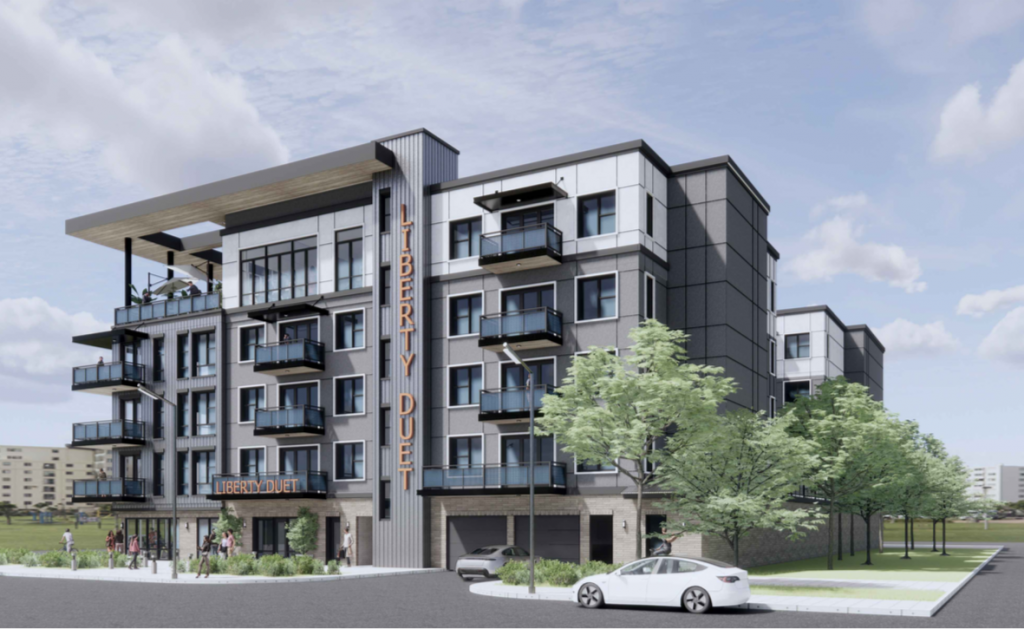 A 54-unit, market-rate apartment building at 353 East 500 South by locals Cowboy Partners looks to share the glow of Salt Lake City’s reinvestment in its campus in and around historic City Hall.

The project will sit directly east of the Public Safety Building on 500 S at the current location of Freshmans Jewelers, a block south of the Library Trax stop. Its 54 dwellings will all be 2-bdrm, 2-bath, and be stacked four over one, on .54 acres in RMF-45 zoning.

Library Square is a half a block away.

The podium, at grade, will provide 48 parking stalls for residents. There is no retail on the property. Ground-floor uses are limited to 500 South, which will see an entry, lobby, fitness center, and the parking garage entry/exit.

Developers are looking to the Planning Commission for exceptions from several zoning requirements in the RMF-45 zone.

The top-floor set-back exception and a height increase to 55 ft, given the building’s bountiful balconies and facade articulation, aren’t likely to see resistance.

In contrast, the applicant put much effort into arguing that the 60% glass requirement for street-facing facades shouldn’t apply to their project, both on 500 S. and Blair St.

The absence of any activity on Blair St. is likely to be an issue with the Commission, if the application is any indication.

The developers offer an avalanche of photographs showing how Blair St. has been ignored by both developments recently built on it – the Public Safety Building and the Exchange’s two structures.

Thus, according to the applicant’s logic, Liberty Duet should be exempt from the code’s requirements to activate the street frontage along Blair.

The street, according to the developer’s application, is a “private street owned by the City.”

The project is currently being processed by Planning staff and will likely see light at the Planning Commission in late Spring.