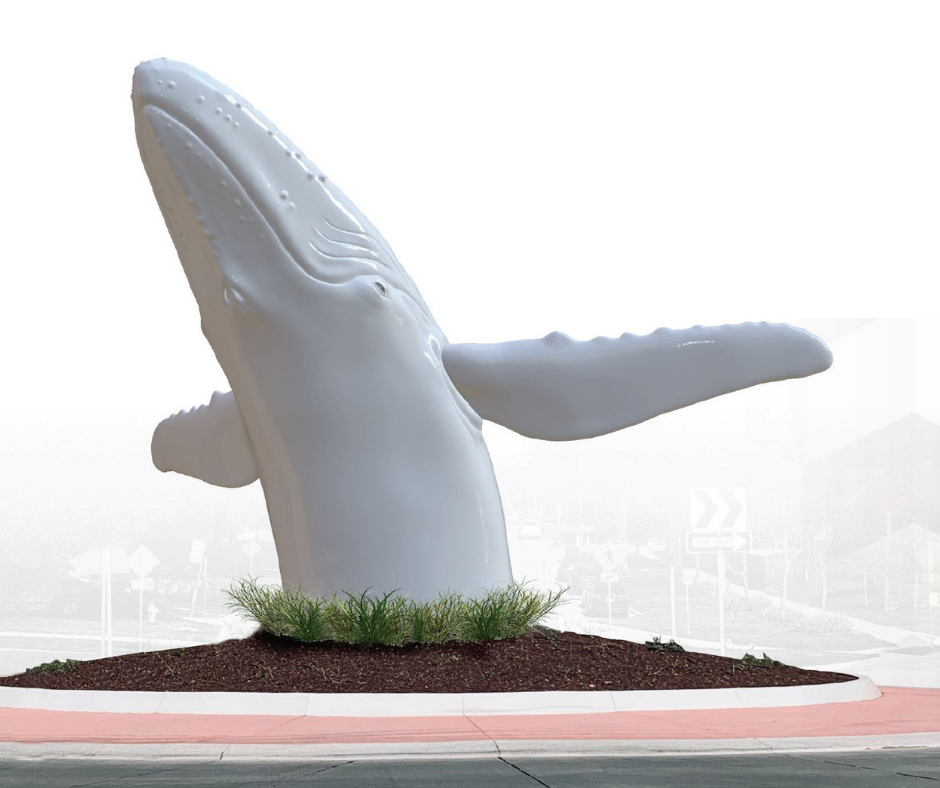 It didn’t have to be this way. In fact, for a few weeks near the start of the COVID-19 pandemic, it wasn’t.

That’s when the Salt Lake City Art Design Board, empowered with making recommendations on substantial pieces of public art, debated what look and feel residents and visitors would experience when entering the 9th & 9th business district via a new roundabout near 1100 East.

For a two-week period, a majority of the board recommended a piece of art that was, well, not a 23-foot tall profile of a humpback whale breaching a new roundabout and stretching its fins in a 40-foot wide spread of mammalian elation.

A majority of the board initially selected a piece that many found sophisticated and beautiful if slightly obscure and not colorful.

But records from city meetings at the time show of the debate that the objections of two board members appears to have helped change the course of the neighborhood indefinitely. The debate created whiplash for a team of artists that was initially selected, and it eventually led to some consternation among some residents over the imminent construction of the whale.

Call it art by government committee. Call it the likely inevitable public reaction to any winning installation in a well-to-do neighborhood. Whatever you call it, here’s what led to a humpback whale coming to 9th & 9th.

Where’d this come from?

The historic neighborhoods collectively organized as East Liberty Park worked with the Salt Lake City Transportation Division for years on what to do with a problematic five-way intersection at the east end of the 9th & 9th business district.

It was a remarkable effort by transportation planners, who implemented and studied pop-up street reconfigurations using temporary materials that helped show how dramatically the intersection could be changed.

The change involved balancing the needs and concerns of impassioned neighbors, including local businesses, adjacent homeowners, people who view on-street parking as sacred space not to be removed, and firefighters tasked with driving over-sized engines in and out of the nearby fire station.

And, like all big rotaries, the new circle opened up an opportunity to create public space, typically filled with landscaping and, in this case, art and lawn gnomes.

Salt Lake City and the neighborhood decided to use the space to make a statement that could set the tone for one of the capital city’s most popular business districts.

The Salt Lake City Arts Council has an FAQ detailing some of the contest and selection process that led to the whale.

In it, some details from the timeline of the contest and selection are included. Other details, like the initial vote to select a group of artists looking to bring pillars partially constructed of historic rails that once ran through the neighborhood, to the roundabout, aren’t included.

But they’re key in knowing what could have been, what isn’t and what will be, along with the “Out of the Blue” decision.

By May 14, 2020, the Arts Design Board had whittled down to three the pool of artists whose installations could become a permanent fixture of the newly built public space.

That night, the board interviewed three finalists to ask artistic questions around intent, symbolism, materials and more.

Board members debated over the vibe the gateway art should have: Should it be fun and “funky” to match what some feel is the personality of the neighborhood? Or should it be more abstract and, perhaps, sophisticated?

Four members out of six liked the submission from Charlie Kimball, Hannah Vaughn and Marc Wise. Two members opposed, preferring a submission that depicted a type of mythical beast for the roundabout.

“Perhaps my neighborhood will be with me and think the same thing,” she added.

A second member, Justin Johnson, weighed whether 9th & 9th would be happiest with something funky and cartoonish or something more abstract and serious.

“Maybe the mature look will go through better than, say, like the Dr. Seuss-looking situation,” Johnson said at the meeting. “Maybe it’s time for the neighborhood to grow up a bit.”

“We want to make everyone happy,” he added. “Either direction I could see complaints about, ‘Oh this is too this way or this is too that way.’ They’re both fantastic pieces.”

Two weeks after the May 14 meeting, the art design board revisited and reversed its choice.

Trout and others had raised concerns around engineering and safety, and opponents again raised concerns over whether the proposal picked two weeks prior instilled the right tone, vibe and character onto the neighborhood.

The board decided to let all three finalists revise their proposals and come back for another round.

Meeting records show at subsequent meetings Trout raised her concern that the art from Kimball, Vaughn and Wise wasn’t “funky” enough for the neighborhood. While it almost voted again to recommend the team’s project to the mayor, the board ultimately decided on June 25, 2020 to start over.

That summer, members of the City Council complained to the Arts Council office about the reversal. But the board moved ahead, soliciting new submissions that might meet the desire of members of the board.

Meanwhile, the council board became attracted to the idea of an installation that could have a rotating mural on it.

Artist Stephen Kesler, who designed the humpback whale and who was one of the three finalists from the first round, remained a favorite with the board.

His creation was certainly funky. (Whales hadn’t been talked about in Salt Lake City since the late 1800s.) It would certainly command attention. The sheer size of the whale would be large enough to obscure the cross-valley view of people biking or driving west on 900 South.

It would provide ample space for a colorful mural that could change with the neighborhood.

And, as has been noted by the Arts Council, it could coexist with the crop of gnomes that has been living on the roundabout since the stop-and-go art selection process started in 2020.

It also left a team of artists wondering even today why its submission was chosen and then unchosen.

“I’m still obviously a bit bitter,” said Charlie Kimball, one of the artists, who lives in the neighborhood. “It’s kind of like, ‘Congratulations, we’ll submit your proposal to the mayor.’ And then two weeks later it’s like, ‘Well, actually not.'”

Board member Justin Johnson was right when he foreshadowed complaints about whatever selection the board made, and opinions about a whale in the high country desert have been roiling since the announcement was made that Mayor Erin Mendenhall had approved the board’s recommendation in March.

“Imagine getting a bride to turn around and look at her lovely, multi-thousand dollar dress, and there’s this big whale at the window,” Scott Maynard, owner of the nearby M. Scott Salon, told the Salt Lake Tribune recently. “There was lots of fodder for discussion, and we thought it would at least make the Arts Council take a couple of steps back… but they never did.”

Good process or bad. A good statement or not, the whale is coming to 9th & 9th.

In the end, Johnson probably said it best back in May 2020: “People are always going to have some shit to say. I’m sorry, but they will.”

Gnome ifs ands or buts about it.