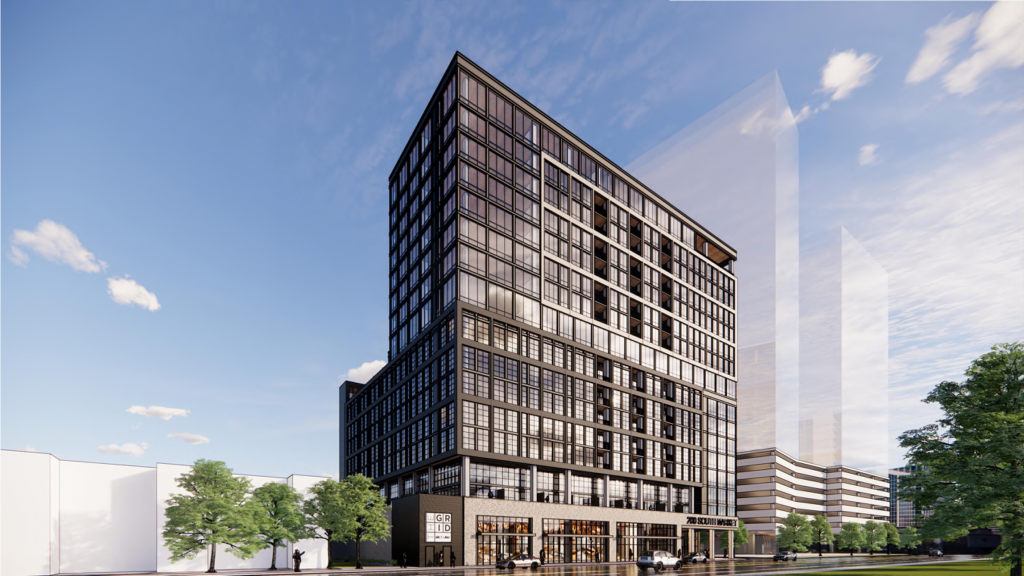 A 16-story mixed-use building with more than 300 new apartment homes would begin to replace the now-shuttered U.S. post office at 260 W. 200 S. as developers continue transforming a once parking lot-riddled block in the center of Downtown.

The new building would continue the ongoing development of the West Quarter by the Ritchie Group and others, and will continue the addition of buildings that promise to add round-the-clock activity on 200 South.

The proposed high-rise would be built immediately south of a separate luxury apartment building. It will fill an existing hole at street level, which is rapidly being transformed into an urban corridor lined by new buildings built up to the property line with active ground floors.

Development on other phases of the West Quarter has been underway, and we’ve long expected more to come. But the latest proposal, unveiled in a design review application this month, provides the first clear details on the next development fronting 200 South.

“The area is on its way to becoming the sports and entertainment district of Salt Lake City that has been envisioned for years way before we purchased the former post office land,” Ryan Ritchie, owner of the Ritchie Group, told us.

The latest West Quarter building, shown in renderings as an apartment building called The Grid, would replace a surface nearly 1.5-acre parking lot that has detracted from the pedestrian experience near the Convention Center.

The building will have copious parking, it’ll just be hidden from public view. A seven-story parking deck containing 343 parking spaces will be wrapped with residential units that obstruct the carspace from view. It will also provide 175 bike stalls (88 of them secured) and 14 EV charging stations.

“The first floor will host 2 or 3 different retail spaces, consisting of a combined 21,400 sqft of retail space, as well as a 2,625 sqft residential lobby,” the company wrote in a design review application.

While preliminary, the renderings envision a large retail space of up to 20,000 square feet possibly for another full-service grocer Downtown to supplement Harmons and a few specialty markets.

On the top floor is space for a sky lounge and sky deck. While the city would benefit from more buildings that offer public access to a bar or restaurant incorporated into one of its new high-rises, it’s not clear whether sky lounge in The Grid is intended for public use or just tenants but it’s likely the latter.

Floor two through eight will old the parking deck wrapped in residential units. The parking will be screened in an unspecified piece of artwork, the company said, with the exact art being determined at a later date.

Floors nine through 16 will be residential and unspecified amenity spaces.

As has become customary with new buildings in cities across the country, The Grid plans to include amenities like a swimming pool on top of the parking deck for use by the building’s tenants.

“The entire structure will be a Type 1A building with a cast in place concrete structural system,” the company said.

Among the 323 new units, the building will include a mix of studios through three-bedrooms and range in size from 350 square feet to 1,350 square feet.

More on the West Quarter

The Ritchie Group is part of a team of developers filling out the area with urban residential and space for retail.

Another building, The Charles, will bring 240 units in an 11-story building nearby.

The rendering shows a new street created in the middle of the property, breaking up the long expanse of Downtown’s 660-foot block lengths.

That will also help the development open up better urban space, as the state of Utah operates 300 West in the area as a nine-lane state highway rather than a city street.

The development will include two new hotels, Le Meridian and Element, both in the same building and both operated by Marriott. Combined, they will add 270 hotel rooms plus a restaurant on the ground level.

The building will include a “rooftop bar (indoor/outdoor) on Level 11 called the ‘Van Ryder’ that will be unlike anything ever built in Utah before, including an amazing rooftop terrace overlooking 300 West below,” Ritchie said.

“Everyone we’re trading paper with have been food and beverage operators. They are names people know that aren’t in market but will elicit great excitement,” he said. “I’m biased but it will be the best restaurant location in downtown and the operators we’re talking to match the quality of the real estate.”

The group is already at work filling out its new retail spaces with primarily high-end retail stores like West Elm, Michael Kors, Lululemon and Chanel, plus restaurants offering ethnic food.

The impact will undeniably extend the Downtown footprint to the west, replacing acres of dead space with life.