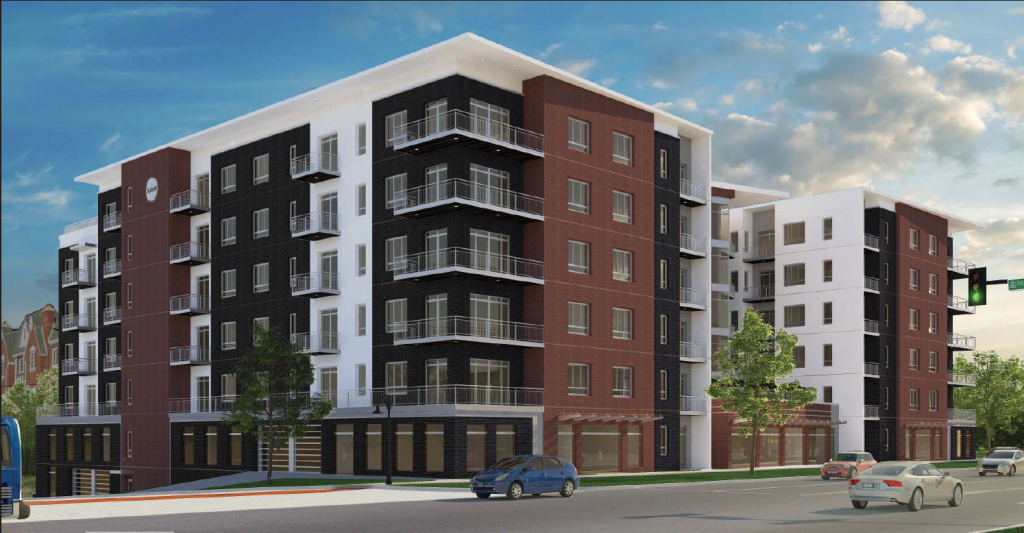 What a difference a year can make.  On Thursday representatives of Garbett Home’s received unanimous approval with conditions from the Historic Landmark Commission for the Hardison Apartments at the southwest corner of the 500 East and South Temple intersection.  The hearing was the developer’s fifth visit to the HLC to discuss the Hardison project since December 2015

But unlike a year ago, Thursday’s public hearing wasn’t packed with disapproving neighbors and the interaction between commission members and the developers was professional.

Thursday’s vote was the second time the HLC approved the Hardison project.  It took the developers three attempts and three building renditions to get the initial HLC approval last April.  Between December 2015 and April 2016 the project went from seven stories with over 180 residential units to four stories with 77 units.

With surging construction costs, developers Garbett Homes decided that size of the approved proposal was too expensive and on Thursday they returned to the HLC with a proposed seven-story project with 138 residential units and three ground floor live work/units.  The new proposal calls for five floors of residential above a two-story parking podium with 186 stalls.  The residential apartments will be a mix of 29 studios, 66 one-bedroom and 40 two-bedroom units.  The three live/work units will be large enough to accommodate commercial uses at 3,877 square feet each.

“It is contemporary; it is not something trying to imitate something old or something historic,” Chris Huntsman, CRSA Architects.

The current design features wrapped balconies at the podium level and two courtyards, one above the main entrance fronting South Temple and one at the south face of building.  Both courtyards will have outdoor seating and gathering space.  Three live/work units, a fitness center, residential lobby and leasing office will occupy the ground floor fronting South Temple.

According to Carl Leith, Senior Planner for Salt Lake City, planning staff felt the current proposal meets the standards for approval because its footprint, scale and setbacks are more appropriate for the South Temple corridor than the original design.

Commission members appeared to be in favor of the project but several members expressed concern with proposed materials and several design elements on the ground floor and roof level.

“There is an eclecticism along South Temple,”  said Commission Member, Thomas Brennan. “But do I think that one of the common threads to the vast majority of the architecture on South Temple is the quality of the detailing.”

Brennan cited the Lotus Apartments on the 300 East block of South Temple as an example of a lack of thought to the detailing and the type of project that the commission should avoid approving in the future along the South Temple corridor.

“If we were to delegate to staff the details, there needs to be some expectation that those details really are timeless, which is a key element to any design on South Temple,” said Brennan.

Commission members voted to delegate design details to planning staff and added several conditions to their approval requiring the developers to address the blank south façade, increase the setback of the main entrance on South Temple, use soft landscaping on the west fire lane and that no mechanical system or air conditioning units be located on balconies.

Construction should start soon on the updated project.  During the hearing, the developers expressed their eagerness to quickly start construction on the Hardison.  The team had applied for a building permit for the smaller design but decided to seek approval for a larger project after putting the initial project out to bid.