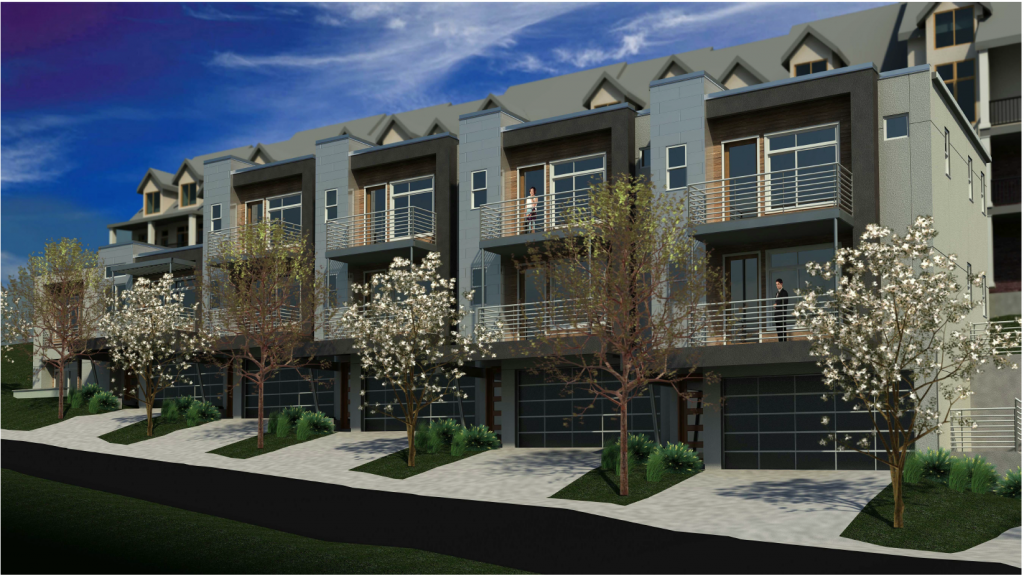 Although it has taken a few years to get started, the Almond Street Townhomes, a proposed development at the 200 North block of Almond Street, is quickly moving forward.  Construction has started on the first two phases, consisting of nine units, of the proposed 17-unit, for-sale townhome project.  Before framing has even begun on the on the initial phase, the project’s developers, Garbett Homes are moving forward with the final phases of the development.

During its August meeting, the Historic Landmark Commission (HLC) approved a construction request for the third phase of the Almond Street Townhomes.  The third phases consists of eight townhomes planned for the southwest corner of the lot fronting West Temple.  The project is located in the Capitol Hill Historic District.

The HLC had approved a different version of the development in 2014.  At that time, Garbett planned to build a 20-unit condominium building on the southwest corner instead of the townhomes.

That same year the City Council approved a legislative action that amended a zoning amendment and development agreement that the Council had approved in 1997 with a different developer.  Council’s action allowed the developers to build the 20-unit condominium building and reduce the parking requirements.

The Council also approved a partial street closure of the eastern portion of West Temple before it intersects with 300 North.  The closed portion will become a landscaped median that will include eight on street parallel parking stalls and pedestrian walkways connecting West Temple to both 300 North and Almond Street.

The project will consist of four buildings with a mix of three to five units per building.  Three of the buildings will front West Temple while the fourth will front Almond Street.  The homes will be energy efficient, include a two car garage and range in size from 1,295 square feet to 2,338 square feet and in cost from $424,990 to $674,990.

According to the developer’s website four townhomes have been pre-sold.

The architects for the project, Think Architecture, also designed the nearby the Marmalade Townhomes, a proposed 12-townhome development directly east of Marmalade Branch on the 200 West block of 500 North.