In Pictures: 111 Main is architecturally unique for Utah 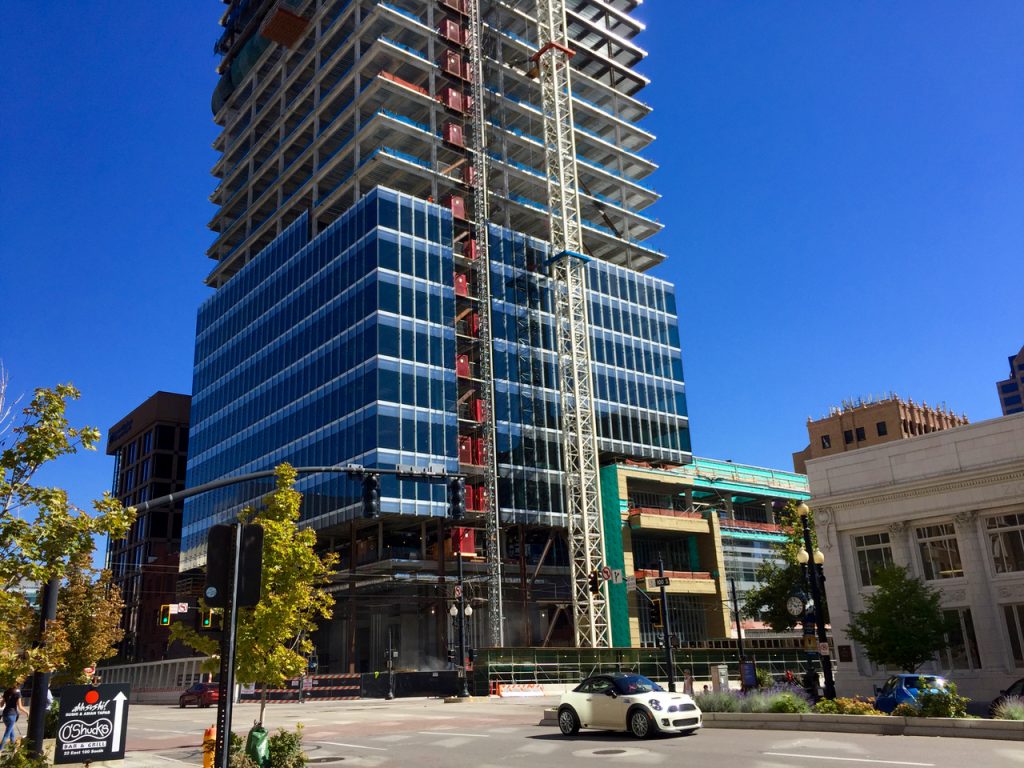 The tower’s construction coincides with construction of the adjacent George S. and Dolores Doré Eccles Theater.

“It would have been impossible to build one without the other,” said Matt Baldwin, the Director of Investment Properties Management (the global real estate investment portfolio of the Church of Jesus Christ of Latter-day Saints) at a presentation for the Utah chapter of the Urban Land Institute.  “These two projects are extremely sewn together.”

Both projects will share a lobby.  It is that relationship that has required unique engineering for the 24-story, 111 Main tower.  The tower was originally going to be built in the same way as any traditional steel-framed tower, with floor plates of equal square footage throughout the building.   As the design process progressed, the Redevelopment Agency of Salt Lake (RDA) informed the developers that more space feet would be needed for the adjacent theater.

The tower’s architects, Skidmore, Owings & Merrill and VCBO Architecture, and engineers had to get creative to accommodate the smaller floor plates required for the first five floors to allow for a larger theater.  The tower suspends over the theater from floors 5-24.  To make this suspension possible, eight miles of steel h-piles (long steel rods) were installed under the ground floor.  Temporary steel was erected at the ground floor to support the building during construction.

The building consists of 2,100 tons of suspended structural steel, 3,000 tons of rebar, 15,000 cubic yards of concrete and 2,600 cubic yards of concrete seismic footings.  According to Troy Thompson, project executive for Okland Construction, workers must place the steel strategically to ensure that the buildings weight is balanced.  The construction team also built temporary suspension cables that help balance the building’s weight during construction.

“This building is truly one of the safest buildings in Salt Lake City,” said Thompson.

According to Thompson, the shared lobby and the tower are separated by a crown that will protect both during an earthquake.  The main building is designed to have a jump range of 28 inches (14 up and 14 down).

According to Baldwin, the lobby will be open during theater performances and will include large art media wall.  Designers originally planned for a large painting in the lobby, but realized that the 35-foot windows would essentially bake the painting over time.  The media wall will show images of Utah’s landscape.

Construction of both the 111 Main tower and George S. and Dolores Doré Eccles Theater are expected to be completed by summer of 2016.