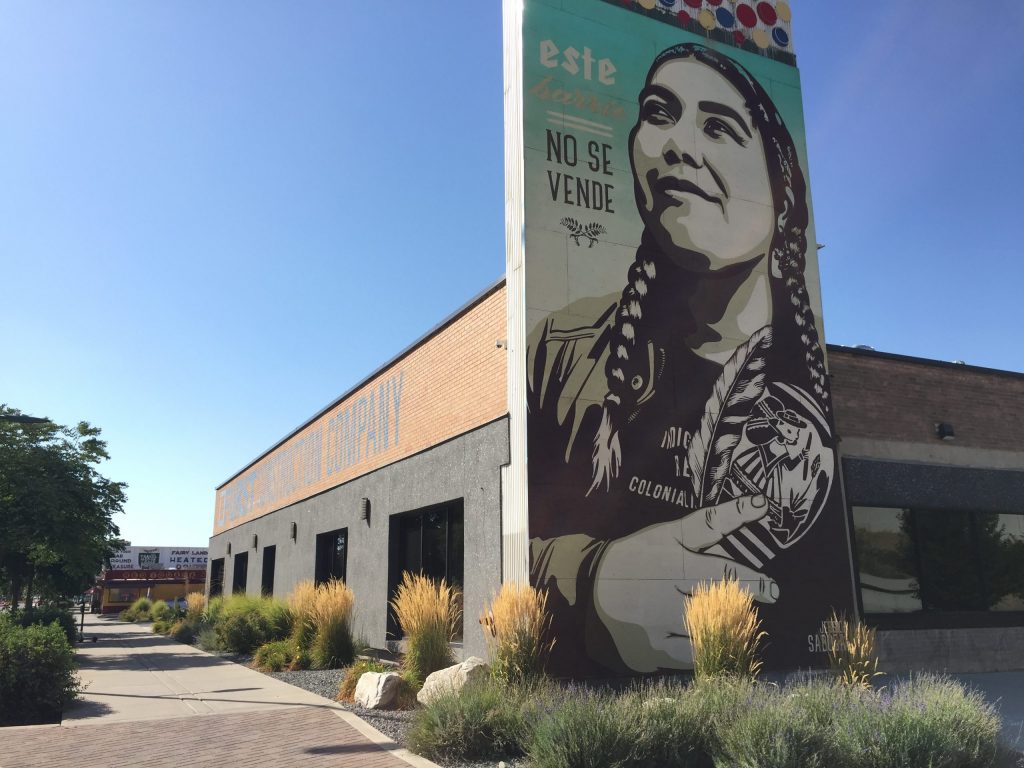 We decided to slow roll several afternoons along the North Temple corridor, to see what construction was going on. We found townhome projects great and small, as well as multifamily projects in various stages of build.

Shall we start in the air, and to the west?

The Jordan River has attracted industry along its banks since Europeans settled the Utah and Salt Lake Valleys. Reclaiming it from industrial uses and pollution will get a boost with the transformation of the Mark Steel site, just to the north of I-80 and west of the Fisher Mansion.

The Mark Steel Corporation site, at 200 South and the Jordan River. I-80 borders to the south, with the massive campuses of the gas company (Dominion) to the east, and the power company (Pacificorp) to the north. Photos by Luke Garrott.

CW Urban has its initial construction crews on former industrial site, and demolition of structures on their 9-acre parcel has begun. The project will be called The Yard, a 170-unit townhome project.

The parcel currently occupied by the white trailers in the photos above, with frontage on 200 South and Navajo St., is the proposed site of a 331-unit 1-bdrm project by Axis Architects, currently in Design Review at the city. At 331 units on a 3.27 acre parcel, the Mark Steel Apartments would bring a high-density neighbor (101 units/acre) to The Yard’s 170 townhome units on 9 acres (just under 19 units/acre).

At 1250 West 200 South, The Mark Steel Apartments site on TSA-UN-T zoning, and the project has low-income tax credits (LIHTC), although to what extent is unclear in their application.

In it the developer states, “Mark Steel Apartments [sic] affordable units addresses [sic] the housing concerns and feasibility for Salt Lake’s population, while providing access to local existing transit infrastructure. These Junior 1 Bedroom units, ranging from 480 – 710 SF are perfectly suited for young professionals seeking to live downtown at a price they can afford.”

CW Urban, a sponsor of this site, will be building these to the north, on nine acres, the first major residential development in the transitioning from industrial area.

Fly to the north and a bit west, the City’s Redevelopment Agency has brought down the Overnighter Hotel for the imminent SPARK! project at Cornell St.

At a recent Redevelopment Agency meeting, Board Members were updated on the financing of the project, which is wrapped up in competitive federal low income tax credit processes. Chicago-area developers known for their success in building affordable housing, Brinshore, secured their 9% LIHTC credits last year, and are hoping for an additional 4% award this year.

Brinshore has restructured their capital stack so that all of their units can be federally subsidized. Their agreement with the city stipulates that 50% of SPARK! project units will be market-rate. Given the current rents along North Temple, according to Brinshore, even their 70-80% AMI units are above market rate.

Whether such math satisfies long-standing west side political concerns about the concentration of affordable housing was unaddressed at the September 14th RDA meeting.

City Council Member Dennis Faris, representing District 2, did not voice comments or questions during the presentation. Nor did the other west side representative, James Rogers (District 1). Both of those seats are up for election this fall.

At the same corner (1525 W), the Diamond Lil’s restaurant has also been torn down, eventually to make way for the Power Station TOD development that will bring 285 market rate rental housing units to two buildings at 1528 W. North Temple (Cornell St.)

Sites and renderings of the projects at Cornell St and North Temple, at the Power Station Trax Green Line station.

Just to the south is the Rocky Mountain Power property, which is about to come undergo a downsizing of power generating operations, a new corporate headquarters, and master planning for residential and mixed-use development.

Heading east, across the Jordan River, the Utah State Fairpark holds a significant future in its hands, while multi-family development at 10th West’s and North Temple’s southwest corner, The Lusso, is pouring a lot of concrete and starting to reshape the street front. Below, seen from the west. The project is being built around El Asadero restaurant on the corner.

Speaking of reshaping the streetscape, two projects further east, towards Downtown, are adding urban form to the corridor.

At 940 West, the Fairpark Apartments are looking close to completed.

And as one moves the eastern edge of the North Temple corridor, the area around the notorious Gateway Inn is starting to transform. The Greenprint North Temple micro-unit project is starting to take shape. Its two buildings will be four stories tall and host 133 units.

Just half a block to the south, Emeril townhomes are taking shape.

Meanwhile, the Salt Lake City Transportation Division is building a multi-purpose trail along an old rail corridor between South Temple and 100 South, called the Folsom Trail. It will run from 500 West, behind the Gateway Mall, to 1000 West, where it terminates at the Dominion Energy property. The trail will be completed when it reaches the Jordan River.