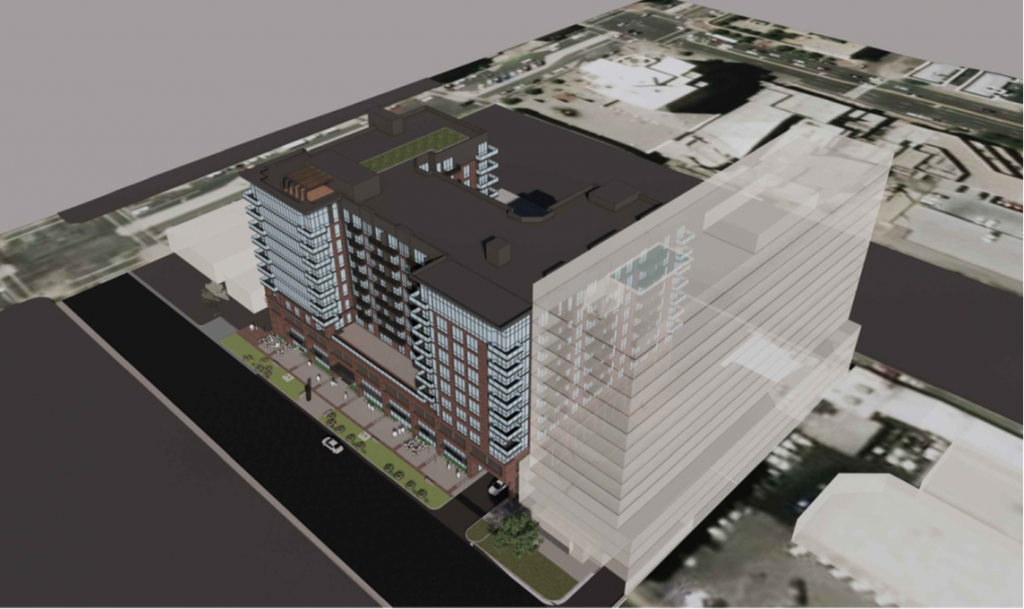 Developers who had to petition for a height increase last year – even though their project is in the city’s most intense Downtown zone, D-1 – are going back to city hall. This time, it’s to add two stories and make adjustments for a phase two of their project, a 15-story mixed-use tower directly to the north.

Central Business District D-1 zoning limits height of buildings not on corners to 100 ft. Any proposal over that height needs design review at the Planning Commission.

Likely to be a routine approval, the developer’s application stands out for several reasons. A proposed mid-block walkway between 200 East and Edison St., and adjustments being made for a second phase to the project – a 15-story tower on .48 acres that will front on both 200 East and Edison.

The acquisition of the .48 acre parcel to the north – currently a three-story 1970s-era office building and its parking ramp – will allow the Moda Luxe project to share parking and amenities with the Phase 2 building.

In addition, owners of the Moda Luxe property at 250 S 200 E learned of the State of Utah’s plans to build a nine-story parking structure “immediately to the west of our planned amenity deck, obstructing views and access to sunlight for future tenants.”

That project, part of moving the Downtown state liquor store from 400 S and 200 West to Edison St and 300 South, is sure to have a major impact on the area.

Edison St has been seeing reinvestment – not insignificantly in existing historic structures on the alley-like byway between 200 and 300 South.

An already lively food and beverage scene in this area of Downtown will likely get more robust with additions being made in the ample ground-floor retail planned for the Moda Luxe Phases 1 and 2, as well as the 255 S State project, which is rehabilitating the Cramer House on Floral Street into a restaurant, just steps to the west from Edison.

The Moda Luxe application anticipates “retail uses through much of the ground floor of both buildings,” including “small outdoor dining areas.”

It will provide 223 parking stalls on four levels, one underground, for a nearly 1:1 stall to unit ratio. Developers note that the two buildings will share parking.

The newly-revealed Phase 2 to the north is currently envisaged as a mixed residential-retail-office project. At nearly 200 ft by BSL’s calculations, it too would need to pass design review at the Planning Commission.

As a result of JF Capital obtaining the parcel to the north, a walkway between 200 East and Edison St. is being proposed.

“A well-designed and functional mid-block, east-west connection” that will be “an important amenity not only to our tenants, but to the surrounding properties” will include “seating, vegetation, and likely some sort of designed space such as a water feature or public art.”

The developers “anticipate that our Phase 2 project will provide space for office and retail uses along this pedestrian way to provide activation and mid-block retail.”

The walkway would be, in the developer’s words, “privately owned public space.” The application notes it would be designed and built with Phase 2 of the Moda Luxe project.