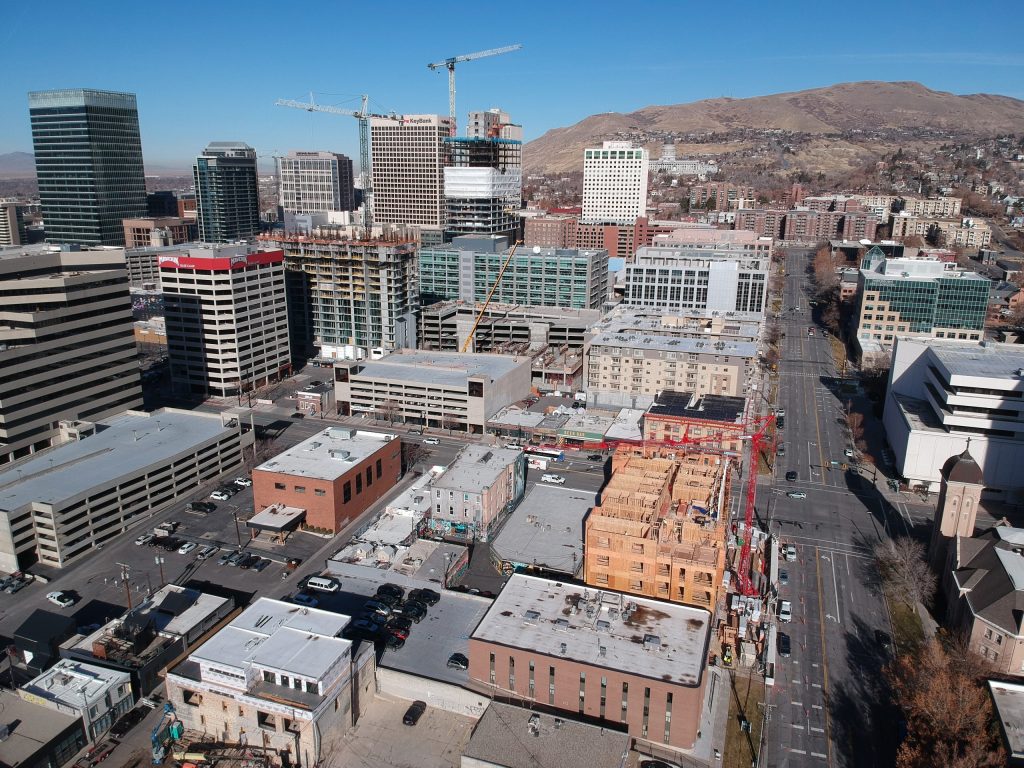 It’s summer. We’re conserving water and about to walk down to the Bees game. But not before writing up some urban development news.

Rising interest rates haven’t yet slowed developers in the capital city. New planned development, design review and transit station area applications are coming in each week. Development already in the pipeline continues to move through, and we wanted to provide a rundown of stories Building Salt Lake readers are interested in.

Here’s a quick rundown of recent activity we’re following. And if you’re not already, please consider becoming a Building Salt Lake member. It’s what keeps the lights on, and we’ve temporarily lowered the price of membership through June 28.

The development company Hines announced late last week that it had acquired a 217,000-square-foot office tower at 136 E. South Temple. It plans to convert the 24-story building into 255 luxury units.

“To achieve this conversion, Hines will strip the existing office building to its core and shell and repurpose the building structure to create an efficient residential floor plan,” the company said.

Units will be a mix of studios and one- and two-bedroom homes. The company said it would limit its use of concrete while instead stressing the use of materials that don’t have as big of a climate change-inducing impact.

Conversion projects aren’t easy, so expect this to take a few years.

The development change has been requested by Ivory Homes, which says it wants to build 19 homes, 14 of which would have an accessory dwelling unit (or small extra place to live) on site.

The rezone would change the sprawling single-family zone on the vacant 3-acre lot to a zoning type that would allow for more single-family units.

While the developer has plans available for review, it hasn’t completed a planned development request for the project. And the Planning Commission vote isn’t the final stop for this first phase of the request.

Residents in the wealthy neighborhood have mobilized a multi-year effort to fight the concept for a variety of their own personal reasons. They spoke for nearly three hours before the commission voted in favor. It will be the City Council’s turn in the coming months.

A new owner for Burt Brothers

We got a tip that a developer might have plans for a development at 204 E. 300 S., which is currently a Burt Brothers tire and service shop on East Broadway.

A quick search shows the property is now owned by a company that’s registered to the Boston-based Kensington Investment Company. That’s the company behind Astra Tower, which is on its way to becoming the tallest building in Utah. The company acquired the building last year, but it hasn’t been reported yet.

We reached out to Kensington’s Park City office for any comments about plans for the site but have yet to hear back. Could the firm be planning another high-rise in the Downtown market? It’s difficult to say at this point. The company has the property listed in its real estate portfolio, but it hasn’t described any plans for the property.

Developers have clearly shown ongoing interest in developing high-rises in and around Downtown Salt Lake City. In recent years, Kensington has been acquiring a mix of office space around Park City, and it built a 20-unit condo project.

The Burt Brothers property has a 14,570-square-foot auto-centric business with a 20-stall surface parking lot. The car business often spills over to interrupt people traveling on the sidewalk.

While plans aren’t yet known, don’t expect Kensington to sit on a half-acre underutilized space in the heart of the Downtown zone. We’ll keep you posted.

After pushback from some residents in the Ballpark neighborhood, a developer who plans to redevelop a crime-ridden motel in the heart of the neighborhood has changed its plan for the site at 1518 S. Main.

Urban Alfandre, which is a Building Salt Lake supporter, had intended to build a 65-foot building to replace the Main Street Motel. It is asking the city to rezone the property from Commercial Corridor to Form-Based Urban Neighborhood 2.

Without having submitted a plan, Alfandre had said it wanted to activate the street with a ground-floor that would likely have tall ceilings for attractive retail.

Some neighbors opposed the height, given the residential streets immediately to the west are zoned for single-family homes.

The developer confirmed it will remove the additional story it had requested and instead seek to build a 50-foot, four-story building on the site.

It will be more challenging to include ground-floor retail than it would have been with 65 feet — assuming for about 10-12 feet per floor plus a taller ground floor. But Alfandre speaks often about its goal to design for the neighborhood, not just the building. We’ll stay on top of the rezone request and design once they come through.

Alfandre also has another project in the immediate area on Main Street that has already been approved, and we have a small update.

Gabbott’s Row would bring 40 rowhome units to two buildings at 1448 S. Main. One building would be built up to the property line, likely a few feet short of the sidewalks on Main and Merrimac Ave. The other would be on the alley to the west, with both separated by a drive aisle.

Alfandre has submitted for its building permit and this week submitted for a demolition permit of the used car dealership and dog trainer that previously sat on the site. Expect to see movement this summer.