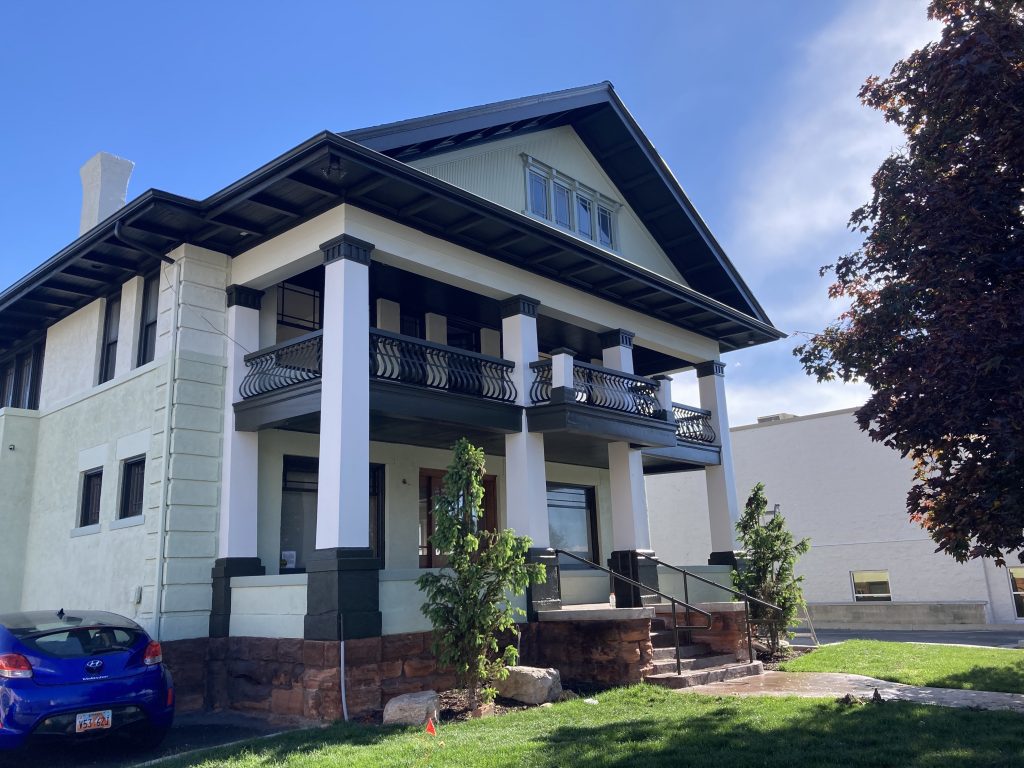 Work Hive, a co-working space that for a decade has served Salt Lakers’ need for flexible office space Downtown, is coming to Sugar House.

The locally owned company bought a storied mansion at 774 E. 2100 S. that for decades has served as an office for commercial appraisal companies.

The addition is a welcome one for a neighborhood center that is developing largely without modern, rentable office space, and the revitalization of a historic building that was nearly demolished in 2009.

“You have driven by this building thousands of times, and you’ve literally never seen it,” said Mark Morris, owner of Work Hive.

Hidden behind trees, worn over the decades and undervalued as a piece of Salt Lake City history, the building that will become home to dozens of offices for small and start-up companies is getting a facelift.

The mansion was built in the early 1911 by Hyrum Jensen, a polygamist and prominent land-owner at the time.

Painters have finished the exterior and are working throughout the inside of the two-story mansion plus basement. Morris will add his metropolitan design style throughout the building before workers move in by July.

Work Hive has operated in a building at 159 W. 300 S. Downtown for 10 years, largely at capacity and with a long waiting list. Morris said he’s been eyeing an expansion for years.

Work Hive is the oldest coworking space in the city and also the smallest. So while this will mark a near doubling of its capacity, the Sugar House location will open at capacity, as well.

People will still be able to book meetings at the space, Morris said, as well as join a waiting list for future availability.

In the meantime, Morris, an urban designer and landscape architect who owns Voda Landscape + Planning, will create a new landscape for the front of the building.

It will mark a new chapter for the building that was nearly torn down 13 years ago.

The city saved the building in 2009 from demolition by the LDS Church, which put forward an ill-advised plan to create loading space for the Deseret Industries building to the south. In a move that is rare today, the Planning Commission at the time blocked the motion to demolish the structure and faced some criticism for the move.

“It’s an adventurous use of our authority,” commission chair Mary Woodhead told The Salt Lake Tribune at the time. Indeed, the commission today is far more likely to approve such requests under legal guidance from city attorneys weary of legal challenges from property owners.

The property used to have an original carport extending west and landscaping, both removed to make way for paved parking that surrounds the property.

When it opens, the Sugar House Work Hive will be a half-block from a new liquor store, a block from the S-Line and within a walker’s paradise.

Want to support a local source of news on what’s happening in your neighborhood? Subscribe to Building Salt Lake.