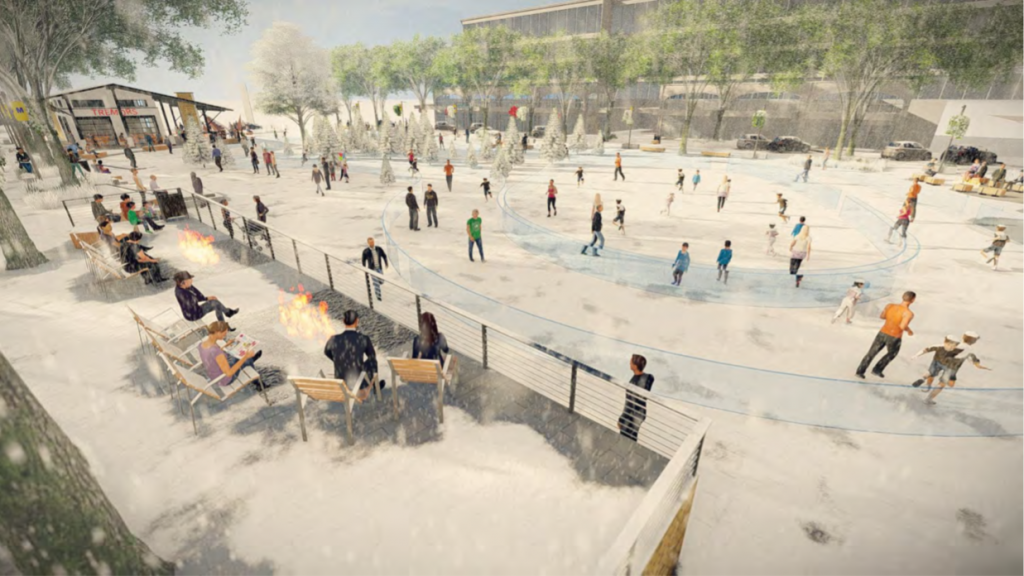 Millcreek’s first steps in place-making a new downtown are well under construction at 3300 South between Highland Drive and 1300 East. Riding the momentum of the city’s incorporation in 2016, leaders have shepherded a TIF area, a master plan, a zoning overlay, conversations with developers and residents, and property acquisitions for public space along a long check-list.

All in, the public investment will be nearly $80 million, and will include a new city hall.

But like a novice skater trying to make a turn on the ice ribbon scheduled to open in January, a trade to remove four static billboards adjacent to its downtown redevelopment area has the city wobbling away from its recently-approved master plan and billboard ordinances.

Instead of emphasizing place-making for people outside cars, Millcreek City officials are now proposing three highway-scale digital advertising signs at the gateways to their new city center – which are not allowed in current code or the master plan.

The requested ordinance and plan changes are still subject to approval by the City Council. In preparation, the city administration has struck a deal with Reagan Outdoor Advertising for the exchange.

The new downtown area currently has restrictions, to insure among other goals, “compatibility of signs with pedestrian-oriented development in all areas, and particularly in designated mixed-use centers and residential areas,” according to the master plan.

The three proposed digital signs would be 26.5 – 35 ft tall, clearly built for visibility to passing cars and not to pedestrian scale.

They will likely dwarf the public spaces around them – which also have an explicitly-stated non-commercial purpose in the area’s master plan.

Meanwhile, Millcreek’s economic development and planning officials tout the deal’s community benefits in a memo to community councils and the planning commission, necessary to get the changes in front of the city council.

The claimed public benefits are the retirement of four static signs, and the city’s access to 4 out of every 10 digital images in the new signs’ turn cycle. The city will also gain ownership of all three signs after 40 years.

The deal is complicated (or made simpler) by the professional links between Millcreek Mayor Jeff Silvestrini and Reagan Outdoor Advertising. Silvistrini and his wife, Leslie Van Frank, are both partner/shareholders in the law firm of Cohne Kinghorn, employed for “many, many years” – and perhaps as recently as last March – by Reagan.

Pushback in the community was reported by local media at a Planning Commission meeting last week. The digital upsizing for the signs in the redevelopment district has also drawn the attention of an anti-billboard advocacy group, Scenic Utah, which is taking aim at what it sees as Mayor Silvistrini’s conflict of interest.

Silvistrini maintains that he has always disclosed his and his wife’s professional relationships with Reagan, as well as Reagan’s in-kind contributions to his mayoral campaign. Van Frank personally worked on a billboard case for Reagan as recently as March 2021, according to Scenic Utah.

Mayor Silvestrini last personally represented Reagan “more than 10 years ago,” he said in a prepared statement, and as Mayor has “not been personally involved in negotiation of the transaction under consideration.”

On a tour of Phase 1 construction given last week to members of Urban Design Utah, Millcreek Planning Director Francis Xavier Lilly began his presentation thanking the faultline that runs through the area.

“Before I even had a stapler for my desk,” Lilly shared, “I had people calling asking ‘What’s my density here? What can I build?’ The key to holding off developers was the faultline.”

Studying the seismic features and establishing appropriate setbacks bought time for Lilly’s department. A master plan was completed, a form-based code adopted, a $20 million bond issued (anchored by future tax increment in the Community Reinvestment Area), and land was acquired through purchase and trade along the faultline.

The city was able to add almost an acre of land to its public space, which now covers most of six acres. The design evolved the faultline-tracing park from a canyon-like channel to a series of small plazas and related amenities.

Lilly emphasized the design’s focus on connective tissue between developments. “Not that there’s anything wrong with Sugar House” (Millcreek’s neighbor directly to the north),  “but we wanted more than a series of buildings and limited public space.”

Overhead rendering of Millcreek Common Phase 1, currently under construction. Evolution of the public space, which traces a faultline, in the master plan. Images courtesy MHTN Architects and EPG Design.

The result was a refinement of their original area master plan, which expanded and refined the public space, now called Millcreek Common – latest plans here.

Phase 1 of Millcreek Common is under construction. It will feature a vehicle drop-off area on 3300 S, a coffee and ice cream shop (Pizza Nono from 9th & 9th is interested, Lilly notes), an ice ribbon (“the longest in Utah, sorry Herriman” say city officials), plus multiple seating areas with natural gas fireplaces and a splash pad.

Ice skating will be transformed into rolling skating in the summer months.

City leaders found the best example of what they wanted in Rapid City, ND, which created a bustling ice oval to redevelop around.

“One of the observations we had early on is that many people don’t like to skate, but they like to watch it. So we deliberately created places that people can use to watch people skate,” Lilly told the tour.

Automobiles will have one-way woonerfs and 45 degree angle parking that run N-S between 3300 S and Chambers Ave (3205 S).

The space to the north of Chambers Ave, Phase 2 of the Common, “will be more passive, where motor vehicles are not welcome,” according to Lilly. In addition to plaza and green space, the city is looking to build an outdoor amphitheater, plus a pavilion, like an orangerie, that can be open and warm in the winter – possibly housing an art gallery.

That part (Phase 2) of Millcreek Common is “at least a few years out,” Lilly said. It makes sense, given that the city is acting as the master developer, and is already involved in ongoing outreach, design, and construction projects.

One of those, phased immediately following the ice ribbon, will be the first building on Millcreek Common – a proper city hall for the young municipality, voted into existence in 2016.

Designed by MHTN Architects, the $38M project will include a 500-stall parking structure to be shared with Cottonwood Residential’s 220-unit mixed-use development to the west of the Common and south of City Hall.

A climbing wall will scale the prominent NE corner of the building.

Private developments on the way

Here’s a list of developments in the City Center area under construction or actively proposed:

22,000 sf of retail and restaurant space

Would face amphitheater and pavilion of Millcreek Common Phase 2

•Cottonwood Residential – mixed-use on the Common

How’s it going to look? No stucco

MIllcreek’s City Center Overlay Zone (CCOZ) attempts to lift standards for outer finish materials in the area – no stucco or EIFS are allowed on any façade visible from a right-of-way. In addition, the city contracted EPG Design to do a design update, which yielded a materials palette to guide developers.

The feel is upscale and earthy, with an emphasis on stone and brick. Planning Director LIlly told us the city council took action to adopt the materials palette as a quasi-policy statement.

“One thing I regret is that we weren’t able to do more in making the scale of buildings smaller,” he told the group.

But on finish materials quality, Lilly is bullish. He also is proud of how the CCOZ code directs developments to articulate toward the Common.

“We’re particularly interested in making sure that the materials used in the buildings that face the common communicate,” he stated, excitedly adding that “The developers are competing against each other to come up with a good looking project that responds to the site.”

As a kerfuffle is starting to kick up dust regarding Mayor Jeff Silvestrini’s alleged conflict of interest in the city’s deal with Reagan Outdoor Advertising, will there also be an outcry over the urban design impacts of three digital signs, billboard scale, in a zone meant to be pedestrian-first?

Two of the three digital signs, below depicted at a 26.5 ft height, can go up to 35 ft. The agreement says they will be turned off from 12-5 am.

“Staff acknowledges that allowing digital signage in the City Center is a significant change in strategy, but that change is not inconsistent with the goal of reducing the number and combined square footage of billboards where feasible,” Lilly’s memo to community councils and the planning commission reads.

Part of that “significant change in strategy” is reflected at least in contradicting the master plan statement, “District signs that represent Millcreek’s characteristic brand and identity should be placed at the edges of each district”.

The proposed advertising signs will be highway-scale and highly visible if the Administration’s deal is accepted by the City Council.

The contradiction with the master plan’s desire to create public spaces that aren’t focused on shopping is hard to overlook. One of its “Guiding Principles” includes: “Design for civic functions should be non-commercial and distinct from the surrounding commercial and residential properties.”

Strategy 2.1: Ensure that signs are compatible with their surroundings. Signs should provide information and make a positive contribution to the character of the community.

Strategy 2.2: Signs should effectively contribute to the aesthetics of the development and minimize negative impacts on adjacent uses and all modes of transportation.

Strategy 2.3: Promote compatibility of signs with pedestrian-oriented development in all areas, and particularly in designated mixed-use centers and residential areas

Notably, downtown MIllcreek’s master plan is currently silent on the topic of digital signs. In the coming months, the newly-created municipality will have to come to terms with who it wants to be.