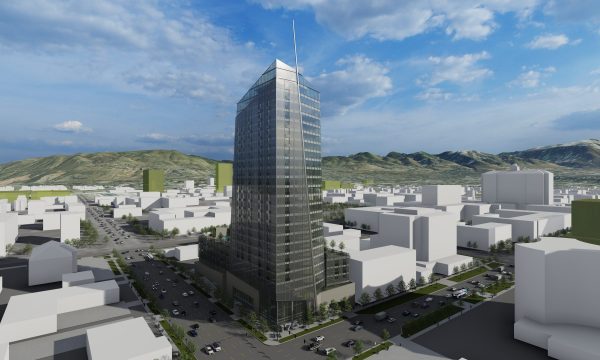 The shifting footprint of Downtown Salt Lake City shows no sign of slowing through the potential upcoming recession.

The latest example: A low-rate motel on the fringe of the Downtown core would be replaced by a 16-story residential high-rise under a proposal floated on a developer’s website in recent weeks.

That’s if a developer who has been increasingly active in the capital city plans to redevelop its parcel at 176 W. 600 S.

Alta Terra currently owns what is operating as a Motel 6 in South Downtown. It hasn’t yet submitted any applications to develop the property and didn’t respond to a request for comment. But the developer is listed as the owner.

On its site, the developer provides a brief description and renderings showing a project that would continue the movement of the Wasatch Front’s most urban area as developers continue to rapidly remake Downtown as the most populous neighborhood in the state.

Alta Terra would build 350 homes in the 16-story high-rise in a mix of micro units and studios as well as one, two and three-bedroom units, according to the description. It would replace a Motel 6 on 1.3 acres at 176 W. 600 S.

The residential portion would be built above a four-story concrete parking podium holding 361 parking stalls that would likely be wrapped in retail. The project would start sometime in 2023.

The developer has shown it is entering the Salt Lake market with a force by adding height and density to popular neighborhoods across town.

The Park City-based company is actively building a pair of residential buildings in Sugar House. It has proposed retrofitting an office building into ‘luxury’ student housing north of Trolley Square. And it’s gearing up to build a shared housing project just east of 700 East, on Bueno Avenue.

Among the projects that are pushing the residential density southward, Alta Terra’s concept for 174 W. 600 S. would be the tallest. It’s possible the company would go even taller by utilizing its status as a corner parcel in the Downtown (D-1) zone.

The following are renderings listed on Alta Terra’s website. This likely isn’t the final look of the building, as the rendering shows a building well over 20 stories tall.

What is ‘South Downtown?’

With the movement of Downtown south past a series of state-owned surface highways, and amid a dearth of neighborhood identity for the city’s urban core, there arises a question of what area we’re talking about.

Following the guidance of the city’s officially recognized community organizations, the area north of 600 South is simply referred to as ‘Downtown.’

We’ve been referring to it as something slightly different than what we’d typically consider Downtown, choosing instead “South Downtown” for the mixed-use developments happening south of state highway 186 (also known as 400 South).

Much of the historical identity of Downtown has been wiped away over time by parking lots and outdated redevelopment. It has long been a place for suburbanites to come for work or entertainment before clearing out, leaving a vacant area behind.

Builders are actively adding the infrastructure that will inject the life that tens of thousands of people bring to an area. What’s left to be seen is whether these newer, dense communities break off into distinct neighborhood communities.

One potential prototype is what’s been branded as the Post District, an area between 500 South and 600 South, 300 West and 400 West, still in the broader area recognized as Downtown.

That area, branded for the newspaper distribution center that will be rehabilitated on the corner of 500 S. 400 W., is being rapidly built out with mid-rise, mixed-use buildings. Will it become a contemporary district or neighborhood once the buildings are completed and filled? Time will tell.