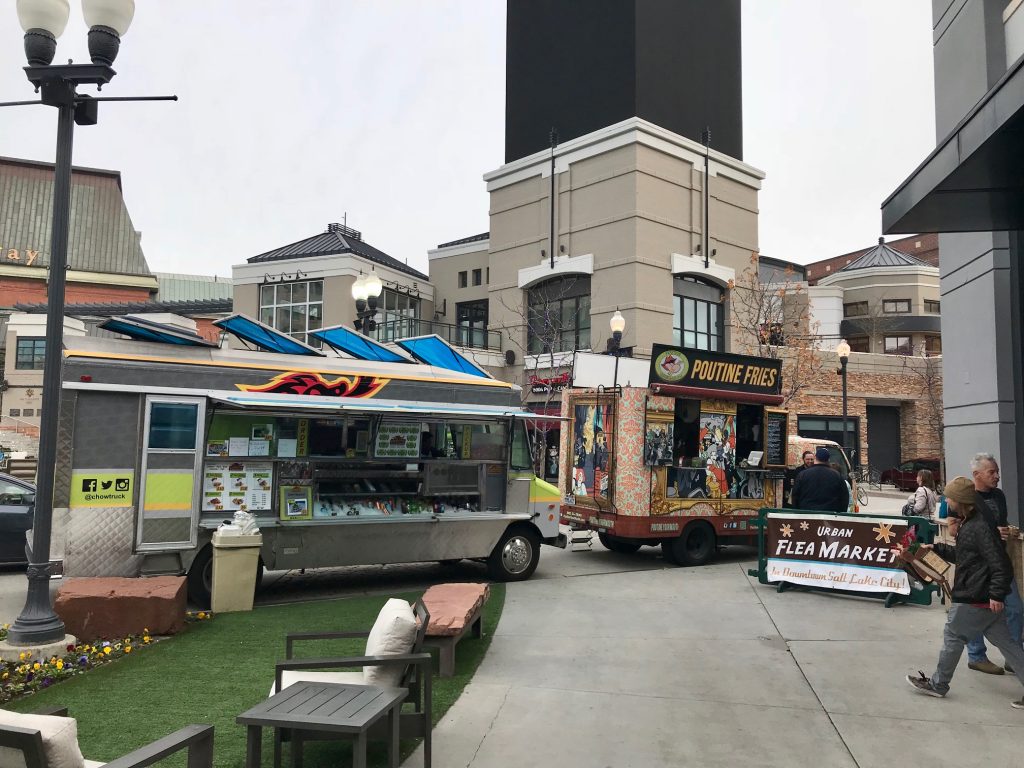 Despite being a gray, cloudy and cold November day there was a surprising amount of foot traffic at The Gateway on Sunday as a few thousand people turned out for the Urban Flea Market’s, first-ever winter market.

“We’ve been nonstop, we’ve has people coming all day,” said Kate Wheadon, co-founder of the market.

Sunday’s market was the first of three special winter flea markets planned for The Gateway, as the mixed-use center’s owners, Vestar, move the focus away from retail and more toward entertainment, culture and community engagement.

Vestar has set aside $100 million for renovating The Gateway.  The company has established an event grant program to encourage groups like the Urban Flea Market to host their events at the mixed-use center.

For Sunday’s market, the organization filled three vacant storefronts across from the Olympic Fountain.  Urban Flea Market co-founder, Michael Sanders, estimated that the market drew between 2,500-3,000 people to The Gateway.

The next two winter flea markets are planned for January 14 and March 11.  In the meantime, the Downtown Alliance announced last week that they will partner with The Gateway to host the inaugural, “Last Hurrah,” presented by Comcast NBC Universal.  The event replaces the Alliance’s annual Eve Winterfest, the multi-day festival that supplied activities to ring in the new year for nearly a decade.

“Downtown is evolving, and what we create is evolving with it,” said Downtown Alliance executive director Jason Mathis in a statement. “The Gateway will be a great place to ring in the New Year as a community. Vestar is making really meaningful investments in our downtown, through public art initiatives, supporting events and festivals and ushering in great, new businesses for Utah.”

While The Gateway has lost dozens of retail tenants, its office, residential and entertainment offerings have been more stable.  Vestar hopes to build off anchors like the Children’s Museum, the Clark Planetarium, the Depot concert venue, Wiseguys Comedy Club and the Megaplex Gateway movie theater by attracting more entertainment focused tenants, like the game-themed restaurant Dave & Busters that will open next year in the former food court.

According to Edie Trott, the marketing director for The Gateway, as many as six new tenants will have signed leases by the end of the year.

Even as The Gateway has been in transition, the surrounding neighborhood has continued to grow.  Over 1,400 residential units are either recently completed or under construction within a block of The Gateway.

The organizers of the Urban Flea Market are considering moving the popular summer market to The Gateway as well, but they have yet to finalize their summer location.  For the past six years, the summer market was held at the surface parking lot on the 600 South block of Main Street.  Since that lot will be developed, the group will need to find a new venue by next summer.

“At the end of the day, it’s what is most convenient for our community and our vendors,” said Wheadon.

Is a public market – 7 days a week, year round – finally coming to Downtown Salt Lake City?

November 11, 2019
After over 12 years of plans, studies, and now political challenges, a 7-day-a-week, year-round Downtown public market may be getting traction among key players...
Read More