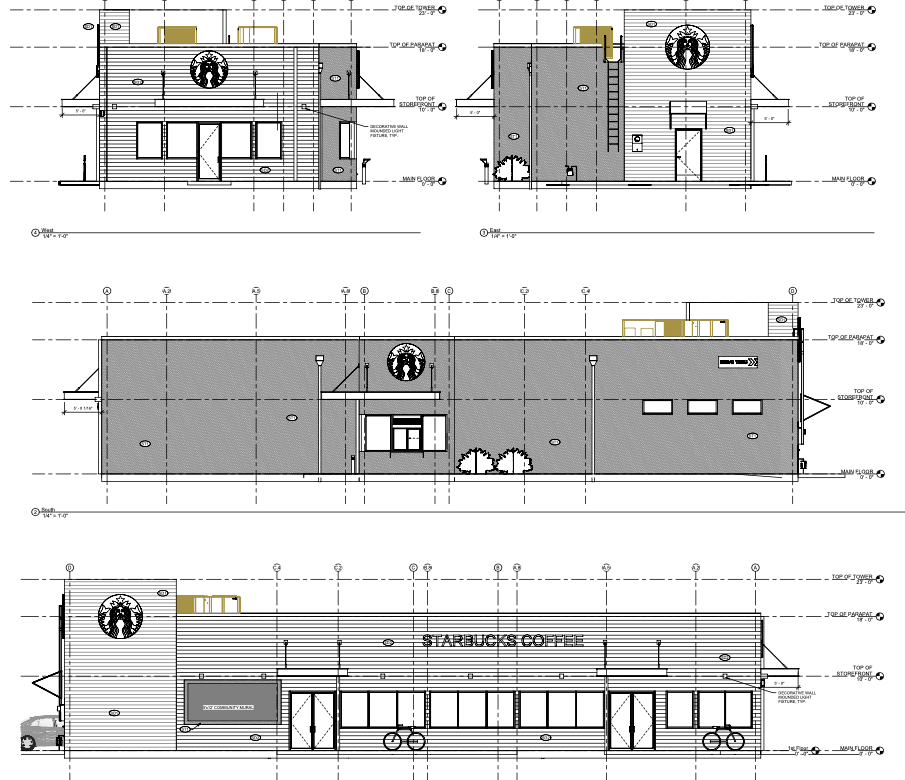 Walkability on the North Temple transit corridor at Redwood Road is about to take another hit with the addition of a one-story Starbucks coffee drive-thru.

While Salt Lake isn’t known as a coffee town, its independent roasters and shops have largely managed to keep pace with the Seattle-based outfit whose robust dark beans and novelty drinks have conquered much of the American java landscape.

At 1699 West, the new Starbucks Community Store and Cafe will sit at the Redwood – North Temple intersection, dominated by UDOT’s control of I-80 access and ownership of Redwood (State Route 68).

Yet the area is covered by some of the city’s most aspirational zoning, aiming to create a dense, walkable environment.

Building Salt Lake has been covering other drive-thru projects in the city. Recently, a Raising Cane’s opened in South Salt Lake at 2100 S and State St. A proposed In-N-Out across the street to the north has withdrawn its application.

On North Temple at Redwood, with its decision to add drive-thrus to the (conditional) use table for the parcel’s zoning – TSA-MUEC-T Transit Station Area Mixed-Use Employment Center Transition –  the city seems to have given up on the intersection.

In 2019 the Planning Division and the City Council aided and abetted the petition, even though the .62 acre parcel’s highest and best use lay in the opposite direction. At the request of the property owners, planners recommended approval and the city council passed the zoning change nearly unanimously in September of that year.

Notably, the only council member to vote “nay” was the current mayor, Erin Mendenhall, then representing District 5.

At the southeast corner of the Redwood – N Temple crossroads, the familiar Starbucks template one-story rectangle building will sit on less than 10% that the .62 acre lot provides. The remainder of the site’s horizontal area will be for stacking cars at the drive-thru and surface parking for employees and customers.

Photos of the site by Luke Garrott. Architectural drawings by Richardson Design Partnership.

The lot is so big, the site plan even inculdes unused, unpaved surface space on the south end of the property.

Critique from the public

While new residents along North Temple will be pleased to have an option for espresso drinks – the members of the public who commented to the city council on the zoning change were withering in their criticism.

At the 2019 public hearing for the zoning change, two members of the Sugar House Community Council’s Land Use and Zoning Committee spoke to the city council. Similar zones to the TSA exist in the Sugar House Business District.

“I find it ironic in the extreme that a use whose only purpose is to increase driving is proposed for a zoning whose specific purpose is to decrease driving,” Lynn Schwartz, vice chair, opined to the council. “I also cannot reconcile the continual wailing and breast-beating by all city entities concerning air pollution with a rezone whose direct effect will be to increase pollution.”

Judi Short, also from the Sugar House Community Council, noted that the same logic was being used to approve the zoning change on N Temple as was employed for the Chick-fil-A on 2100 S. “It was approved because the burger place across the street was already there, even though it was put in under zoning that was 25 years old.”

It’s now grandfathered as a Cafe Rio with a drive-thru.

Lorrie Hendricks of the owners, Gaddis Investments, responded to the criticism at the time. “We care about our neighborhood and our community. If we do do a drive-thru — we haven’t made that decision at all, we don’t have anyone lined up or a plan — the architect that made this zoning happen, she drew it so it would wrap around the building so there would be a lot more room than the Chick-fil-A.”