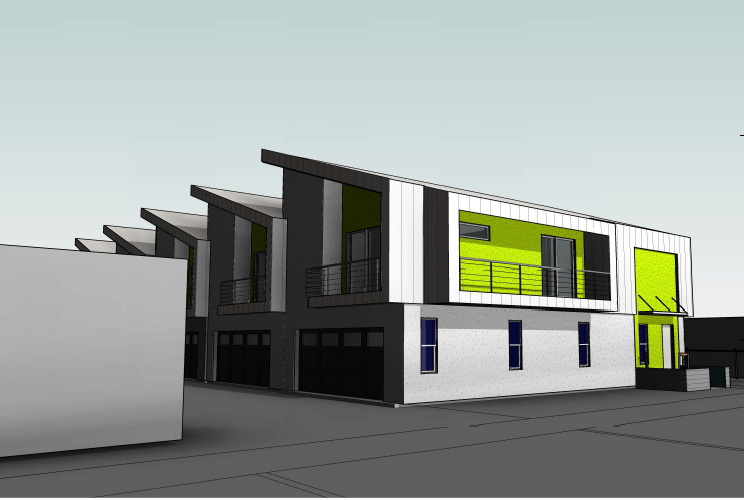 With a bevy of new developments to the south and the east, the historic Guadalupe, one of the city’s oldest neighborhoods, is poised for its own revival.  Despite its proximity to downtown, the neighborhood has suffered decades of neglect as a freeway, multiple rail lines and two viaducts have isolated it from the surrounding neighborhoods.

But developers are beginning to see the neighborhood’s potential, including prolific missing middle developer, TAG SLC.  The developer plans to build the Guadalupe Rowhouses, a 13-unit rowhome development proposed for the 500 West block of 500 North.

The Guadalupe Rowhouses will replace will two residential homes on 0.59 acres.  The project consists of 13 units in two, two-story buildings.  Each home will have a two garage, kitchen and dining area at the ground level and bedrooms on the second level.  The homes will be a mix of two and three-bedroom units, with seven two-bedroom and six three-bedroom homes.

The homes will front a walkway to the west of the buildings that will connect to 500 North and a shared outdoor area directly south of the homes.  Each unit will have a second story balcony that will overlook that walkway.  The garages will be accessed via Beaumont Court, a public alleyway that runs along the project’s eastern face.

TAG SLC has partnered with architectural firm Di’velept Design.  The project is the firm’s second in the neighborhood.  They also designed the Guadalupe Condos, a four-unit, for-sale project that opened in 2017  a block to the north at the 600 West block of Girard Avenue.   Guadalupe Condos consists of two three-story buildings with two units each.

The Guadalupe Rowhouses are less than a block from Project Open, a multi-phase, mixed-use development at the 300 North block of 500 West.  The first phase of the mixed-income development opened in January of 2018 and consist of a six-story building with 112 units.

The project is will be just over two blocks from the North Temple FrontRunner and TRAX stations and the 209 high-frequency bus route.

In addition to the new developments, the city is working with the Utah Transit Authority, the Wasatch Front Regional Council, Utah Department of Transportation (UDOT) and the Union Pacific Railroad to construct a pedestrian bridge over the rail lines at 300 North.  The bridge will provide a needed safe pedestrian walkway for residents and students from nearby West High School to cross when trains are present.  Currently, there are only elevated walkways at North Tempel and 600 North.  Officials hope to complete the bridge by 2022.