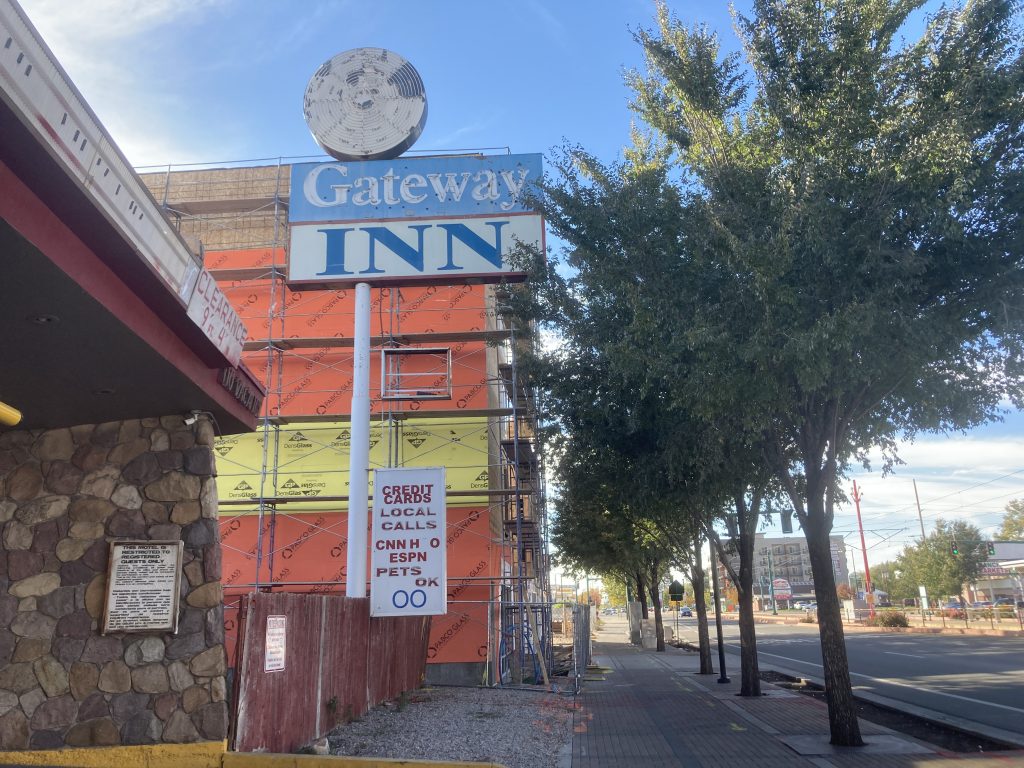 The Opportunity Zone along the North Temple continues to attract investors impressed with the potential of Salt Lake City’s west side light rail corridor.

While eyebrows may rise at the $8.3 million listing price for the 1.28 acre parcel at 819 W N Temple, its location may very well justify the cost.

The Gateway Inn and Weinerschnitzel site from the north. Just to the west is OZ Development’s Greenprint North Temple. OZ Development also owns the vacant parcel and O’Reilly Auto Parts building to the west (lower right). Photos by Luke Garrott.

Just steps from assets like the Jackson/Euclid TRAX station, Rancho Market, and the Red Iguana restaurant, the Gateway Inn has drawn the eye of the city’s Redevelopment Agency for years.

Hoping to build affordable housing in place of a motel known to draw more than its share of nuisance and emergency calls, the RDA pursued talks with the owner of the property, David Pope, who also owns the Main Street Motel at 1518 S Main.

Those talks were ultimately unsuccessful, Pope told us, despite the city and specifically Executive Director Danny Walz being “a delight to work with.” Ultimately, he said, he was discouraged by “a process that was cumbersome and delay-filled.”

Choosing instead to list the 1.28 acre property, Pope says he has received 7-8 offers, most of which have been over the asking price of $8.3 million. The assemblage, on the southwest corner of 800 W and N Temple, includes the old Weinerschnitzel and adjacent 800 W lots.

Is that crazy money?

$150/sf “sounds like a lot,” Peter Corroon, a local developer of tax-credit and market-rate housing, told us. That’s the same price currently pushing up in the Granary, he noted with some astonishment.

“These guys must believe in North Temple.”

Views of the Gateway Inn and former Weinerschnitzel from the south along the west side of 800 W. The new red two-story brick build at 135 N 800 W is Rancho Markets’ new corporate offices. Photos by Luke Garrott.

Doing some back of envelope math, Corroon figured “If you can build 300 units on North Temple with transit zoning, that’s $27,000 a door, which is not too bad.”

Property owner Pope told us he’s close to going under contract with a buyer.