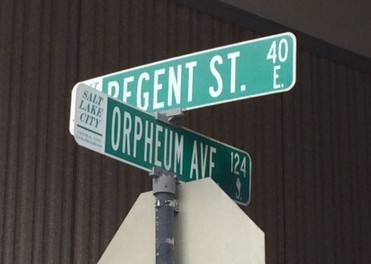 Demolition is completed, the cranes have risen and construction is very much underway on the George S. and Dolores Doré Eccles Theater, also known as the Utah Performing Arts Center, at the corner of 100 South and Main Street in downtown Salt Lake City.  Staff members of Salt Lake Redevelopment Agency briefed the RDA’s Board of Directors in Tuesday’s RDA meeting on the status of construction and on the pedestrian improvements planned for the UPAC development.

Currenlty, Orpheum Avenue and Regent Streets are unwelcoming to pedestrians.  Even before Regent Street was taken over by the Theater’s construction,  the street felt more like an alley then a walkable corridor.  Orpheum Avenue is mostly used to access parking and not as a connector street.  The winning design proposals will need to make both streets more welcoming to pedestrians.

According to the briefing, over $17 million has been raised through private fundraising, $8.5 million of which has already been received.  Fundraising is expected to account for 10 percent of the theater’s $160 million price tag.  The project team also announced that demolition is currently underway on the former Braza Grill to allow construction of a mid-block pedestrian walkway between Main and Regent Streets.

The 2,500-seat, Eccles Theater, is designed to accommodate large Broadway shows and will include a 200-seat black box theater that will house smaller experimental shows.

The Eccles Theater will share lobby space with the planned 111 Main, a 24-story office tower that will be built at the corner of 100 South and Main Street.  The office tower was originally under development by Hamilton Partners before ownership was transferred to City Creek Reserve Inc., a for-profit real estate arm of The Church of Jesus Christ of Latter-day Saints.

Funding for the Utah Performing Arts Center Agency (UPACA) was also set aside yesterday by the RDA.  UPACA is the interlocal agency that will own the Eccles Theater.

Construction of the theater is expected to be completed July 2016, with the surrounding mid-block improvements following the same construction timeline.

The breaking up of downtown Salt Lake’s large city blocks will help downtown provide a better pedestrian experience.  The mid-block walkways in the City Creek Center will be further extended once the Eccles Theater is finished.   Improvements to Regent Street and Orpheum Avenue will provide better connections from the theater to Main and State Streets and encourage more pedestrian activity in the heart of downtown.