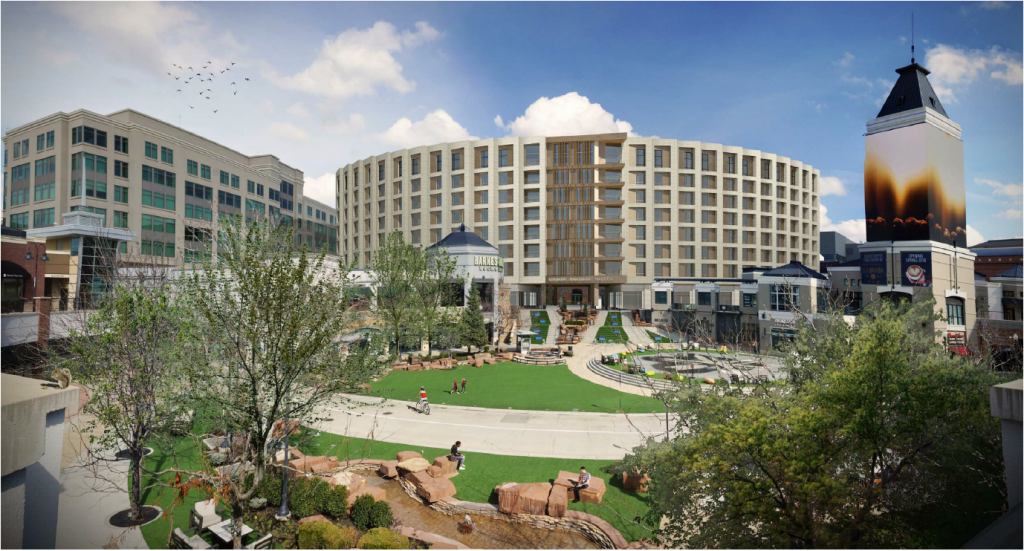 A proposed hotel at the site of the historic Union Pacific Depot is now significantly closer to being realized after the Salt Lake City Planning Commission approved with conditions a Planned Development and Conditional and Building Site Design Review by Arizona-based Vestar and the Athens Group.

Vestar, the owner’s of The Gateway, proposes building an eight-story hotel that will wrap around the west face of the historic, former train station.  As currently proposed, the project will include the renovation of the Union Pacific Depot and eight floors of new construction directly west of the Depot.  The project will add around 225 guest rooms, 26 suites, a coffee shop and over 6,700 square feet of restaurant space to The Gateway.

The project is in the Gateway-Mixed Use zoning district, which allows building heights up to 75 feet.  The developers went through the Conditional Building and Site Design Review process to allow them to build up to 99 feet, the same height as the depot, with Planning Commission approval.

Because of the historic designation of the Union Pacific Depot building, the developers needed approval from the Historic Landmark Commission (HLC) of new construction, major additions and demolition requests.   Earlier this month, the HLC approved Vestar’s new construction and demolition requests but required that the developers return to the commission for final design approval of proposed signage, canopies and alterations to the Depot’s Grand Lobby.

“We really hope to revive the original spirit, character, vitality and in some ways the function of the building,” said Emir Tursic, project architect for HKS Architects.

The exterior of three-story Union Pacific Depot will remain mostly unchanged.   The ground floor fronting 400 West will include the hotel reception, a lobby bar and the building’s two east-facing entryways.  The iconic Grand Train Hall will be preserved with the building’s south wing (formerly the home of Urban Outfitters) will be converted into a restaurant.

The depot’s second and third floors will include administrative offices, guest rooms and suites.  A boardroom and specialty bar will occupy the space above the reception and lobby bar on the second floor.

According to Tursic, the architects opted for a more muted color scheme for the new construction component of the hotel so that it wouldn’t compete with Depot’s iconic red brick exterior and help connect the building to the adjacent Fidelity building.  The new construction portion will contain the bulk of the hotel’s guest rooms on floors two to eight.  The ground floor will include meeting space, a junior ballroom and a fitness center.

The building will have a c-type curvature that will allow for an open courtyard to separate the new building from the historic depot building.  A coffee shop will front the courtyard and connect to the depot building. The courtyard will also open directly to the Olympic Fountain Plaza and The Gateway with a portion of the first floor opened up below a seven-story bridge that will house each floors’ suites.

The developers noted that converting the Depot’s Grand Hall into a hotel lobby will allow for increased public access to the historic structure as the hotel would have 24-hour security allowing the public to access the space at all hours.  Currently, the Grand Hall closes at 10 p.m.

The developers have also pledged to respect the pre-existing public easement agreement established when The Gateway first opened that ensures public access to the Grand Hall from 400 West.

“The public should be welcomed with signage, with architectural gestures and invitations, so the public knows that this is public space,” said Roger Borgenicht, a transportation advocate with Utahns for Better Transportation.  “It is one of the treasured public spaces architecturally and historically in this city and it would be a shame if through financial priorities and social forces the public doesn’t feel welcomed.”

Borgenicht expressed confidence that the developers will respect the public easement but lamented the fact that past city administrations failed to make the Union Pacific Depot, once the rail gateway to the city, the new intermodal hub.  Borgenicht cited his advocacy work 20 years ago to make the Union Pacific Depot the new intermodal transit hub.  At that time city officials opted for the current Hub’s 600 West location, with the hope that it would help spur development further west of downtown.

The developers will need to return to the HLC for at a later date for final design approvals for signage and alterations to the Grand Hall.  Vestar hopes to start construction next year with a 2021 anticipated completion date.

The hotel is one of several significant proposed changes to The Gateway as Vestar continues its mission of converting the former mixed-use shopping center into a mixed-use lifestyle and entertainment district.

This week Denver-based, Punch Bowl Social announced plans to open their first Salt Lake location at the former site of The Gateway Barnes and Noble, directly north of the Olympic Fountain and northwest of the Union Pacific Depot.

Punch Bowl Social is known for combining a bar-like atmosphere and serving of drinks in punch bowls with bowling, karaoke, arcade and table games.  The establishment will have a bar license to allow patrons to take their alcoholic drinks to the gaming area.