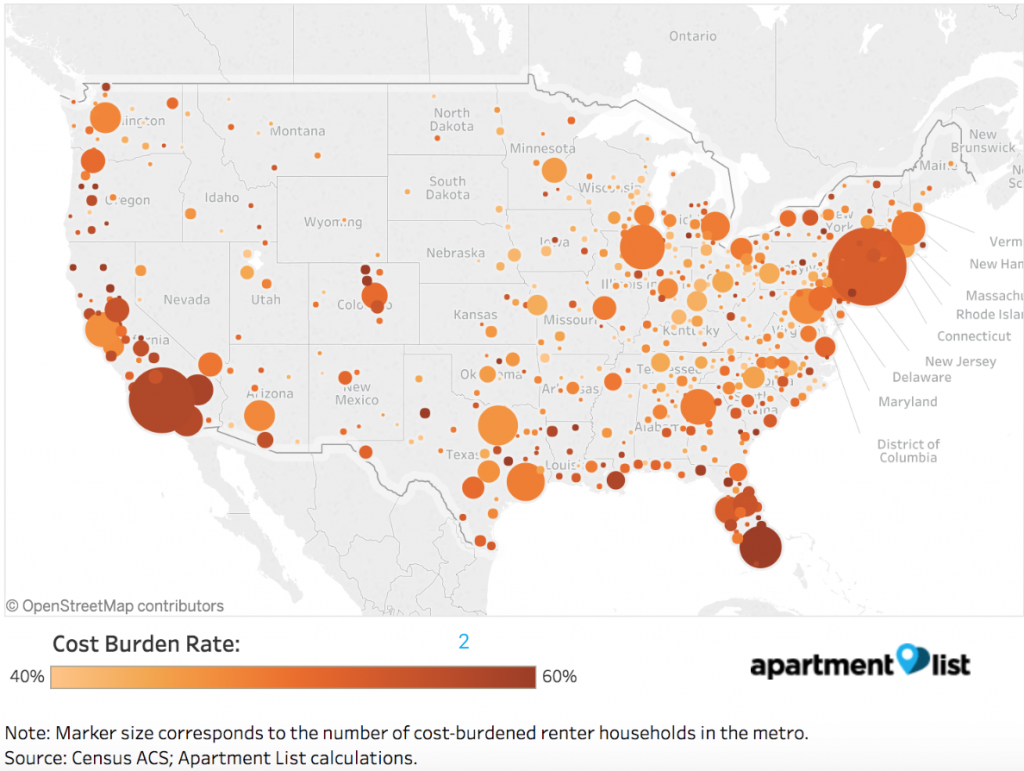 Despite nearly a decade of continuous economic expansion, America’s current prosperity is not benefiting a large portion of the country.   Stagnate wages combined with rising housing costs have contributed to a national housing crisis with nearly half of all households nationally spending more than the recommended 30 percent of their incomes on rent.

In a new report, Apartment List, an online rental marketplace, analyzed new data from the Census American Community Survey to identify key trends among the millions of households who struggle with housing costs. The data shows that locally, residents are slightly less likely to be cost-burdened than other large metros, but the local rate is rising while nationally, the share of renters who are cost-burdened has remained relatively unchanged since the start of the Great Recession in 2007.

According to the Apartment List report, 44 percent of Salt Lake Metro renter households were cost-burdened in 2017.  That represents a slight improvement from 2016 when an estimated 45.3 percent of residents were considered cost-burdened.  But the rate is up 1.1 percent, or 6,895 households, since 2007 and in that same time frame, the median rent has increased 16.1 percent while the median income has risen just 5.2 percent.

Despite the growing disparity between housing costs and incomes, as of 2017, the Salt Lake Metro has the fourteenth lowest rate of cost-burdened renters of the nation’s 100 largest metro areas.

August 6, 2018
Salt Lake City already has one of the country’s strongest economies and hottest real estate markets, but according to a new report by LinkUp,...
Read More

July 10, 2018
Salt Lake is experiencing a surge in market rate and higher-end apartments as supply tries to catch up to the demand, but according to...
Read More

February 5, 2018
At this point, reporting that rents in Salt Lake City continue climbing feels a bit repetitive.  As has become the standard for the past...
Read More

December 13, 2017
In the face of rising rents and an increasingly limited housing supply, the Salt Lake City Council unanimously adopted the Growing SLC Housing Plan that will...
Read More