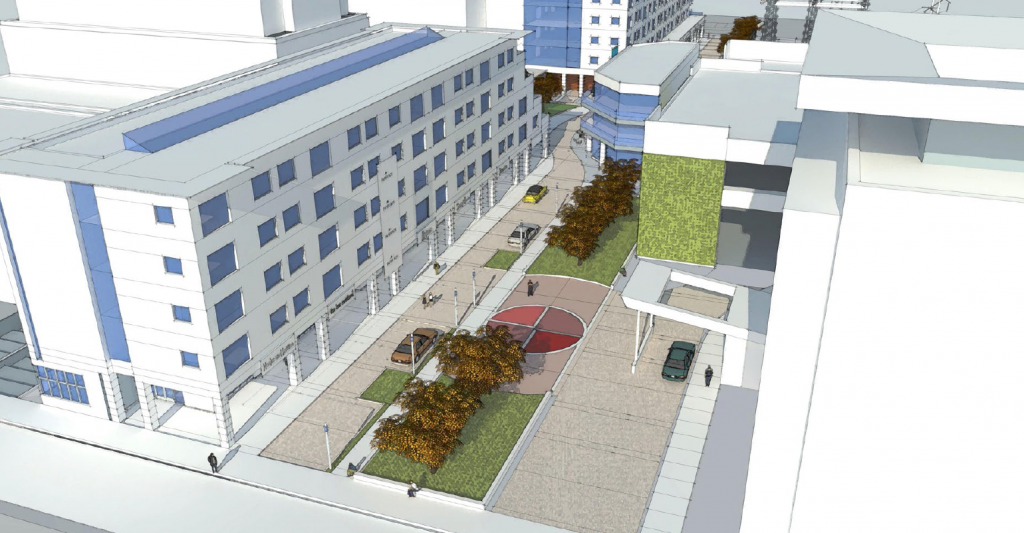 The construction boom at the 100 South block of 300 West looks to continue.  In the past year, two newly -constructed hotels opened at the block’s north end across from the Vivint Smart Home Arena.  On the south end of the block, Clearwater Homes is converting the former Westgate Business Center into the Paragon Station Lofts, a 38 residential unit development.

Now a third project is poised to start construction later this year.  During Tuesday’s monthly meeting with the board of the Redevelopment Agency of Salt Lake, the Salt Lake City Council acting as the RDA board entered into an Exclusive Negotiations Agreement with Peg Development and Clearwater Homes for the development of the Utah Paperbox property at 340 W. 200 South.

Both developers have a vested interest in the block.  PEG Development is behind the block’s recently completed Hyatt House and Courtyard by Marriott.  The Paperbox site also borders the Hyatt House and the Paragon Station Lofts, which according to Micah Peters, the CEO of Clearwater Homes, made the partnership a logical one.

As currently proposed, the project would include two residential buildings with a combined 168 units, consisting of studios, one and two-bedroom units.  The project will also include commercial space and 7500 square feet of open space that according to Peters, will include a grand entrance of 300 West that incorporates the adjacent Hyatt House.

Under the terms set by the RDA board over the summer, the Paperbox development must include a mix of uses and an affordable housing component which was originally set at 20 percent of the units reserved for residents earning 60 percent of the Area Median Income (AMI).

Peters asked the RDA board to loosen that requirement to include a range instead, such 60 percent to 80 percent.  The final percentage and income requirements will be finalized during negotiations.

“One of the real jewels of that block is the ability to cross it at multiple directions,” said Stan Penfold, the RDA chairperson.

The Paperbox project is one of several RDA projects awarded to Clearwater.   The company took over the struggling Broadway Park Lofts and is developing a mixed-use project as part of the Marmalade Block Development.

Several board members voiced concerns about the proposed public space attracting vagrancy and crime, do the project’s proximity to Pioneer Park.

“That is a challenge that we will have to overcome,” said Peters.

The developers will have 90 days after signing the agreement to negotiate the final terms of the deal.