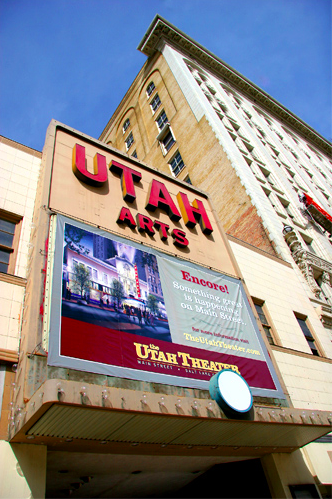 Despite a years-long negotiation with the adjacent property owners, not all Salt Lake City Council members are ready to consign the Utah Theater to dust.

No current City Council members were on the RDA Board when it decided to buy the theater in December 2009.

At a meeting last week, City Council members acting as the RDA Board all agonized over losing the theater. Yet many also acknowledged that they had understandings with the developers gained through small-group meetings at city hall.

Those understandings are in the process of being crafted into a purchase-and-sale agreement between the RDA and the Hines-LaSalle group. They have agreed verbally to meet the RDA’s three top priorities – affordable housing, a midblock walkway, and incorporating elements of the old theater into the street presence and ground floor of the new construction.

One RDA Board member called on local philanthropists to step up, and others expressed interest in transforming the theater back into a grand venue for film.

The RDA Board tried to wax nostalgic over the old theater, even though they are too young to have seen films there. Charlie Luke (District 6) noted he might have seen Star Wars for the first time at the Utah Theater.

Luke, the current longest-serving member of the Board, was even moved to state, “A grand theater for movies made sense to me [then], and still makes sense.”

“I’m struggling with losing the theater like everyone else,” Andrew Johnston (District 2) acknowledged.

Yet it was apparent that the Board had resigned themselves to the conclusions of the RDA staff. The theater doesn’t have investors or an end user. Notably, the option of the city bonding for the Utah Theater’s restoration has rarely, if ever, arisen.

RDA COO Danny Walz was asked by Board member Chris Wharton (District 3) to give a candid assessment of the situation.

“There is no more demand for these types of venues” Walz responded, referring to single-screen movie theaters.

Walz also spoke of wanting to avoid ‘“cannibalizing our existing theater users Downtown. When you think of Abravanel, and Rose Wagner, and Capitol, and Eccles, there a reason that within our agreement with the county we call out any future efforts by the agency to build additional theaters. Because we recognized in doing Eccles that we were already going to cannibalize.”

Salt Lake County is seeing a spate of this, Walz asserted, with other cities building their own theaters.

Might there be demand for the Utah Theater’s potential film and performing arts capacities?

A source told Building Salt Lake that it would be prudent for the RDA to wait to see the update of Salt Lake County’s Cultural Facilities Master Plan before they sign off on demolition.

That plan is scheduled for completion in February 2020.

Why impossible? No public investment

The path-dependency of RDA staff recommendations is apparent in the ongoing assumption – so obvious in the Board’s discussions – that public dollars are inappropriate or impossible for the Utah Theater project.

Walz’s framing of the dilemma puts the burden of investment on the purchaser of the theater. “It is very difficult to find an end-user who is able to support the debt service associated with the construction costs not only of preserving it but building it out for its specific use.”

“The operator or non-profit doesn’t have the capacity to also carry 60-plus million in debt service,” Walz testified.

The possibility of public investment was alluded to by Salt Lake resident Pete Ashdown, who spoke at the meeting. He suggested putting a bond up for a popular vote. That would be more consultation of the public than what happened with the $125 million Eccles Theater bond, asserted Ashdown.

Mayor Ralph Becker (2008-16) made a large theater capable of comfortably hosting touring Broadway shows one of his major priorities.

Using the RDA, Becker’s administration created a TIF area on the block of the theater site (Block 70). The city then borrowed $125 million on the credit of the RDA. Borrowing against future tax increment was unprecedented in the RDA’s history.

The RDA Board, coincidentally, is approving a favorable refinancing of those very bonds this fall.

All of that is accounted for in RDA spending on programs, debt service, and other expenses in the RDA’s budget.

And yet, with no surplus, the ability of the Agency to finance significant borrowing Downtown appears secure – as the Eccles project demonstrates.

“It’s a good time to bond,” a former Board member told Building Salt Lake, “if a recession is coming.”

Lower interest rates, construction costs, and the desirability of a low-risk investment – municipal bonds – make recessions an opportune time for governments to purchase loans on the market.

“I call out those philanthropists, in the community, that have not stepped up to come over and talk to us,” Ana Valdemoros (District 4) pleaded during her commentary.

Valdemoros, the rookie member of the Council whose district includes the theater, declared that “right now I’m not at a point that [the deal’s] sealed yet.”

Sources familiar with the performing arts donor scene spoke of the generosity of local philanthropists when they see a demonstrated need for their investment.

So far, that case has not been made for the Utah Theater.

Hope for a Utah Theater revival?

Although a massive public lead was critical to the success of the Eccles, donors don’t need to see a majority public investment, a local source told BSL. 30% might be enough – on a $60 million project, that’s $18 million.

The RDA purchased it for a theater use that benefits the public, yet the city seems ready to walk away from that investment – in the very heart of its “Theater District.”

It’s of little surprise that the local donor community may have gotten the message that the city isn’t interested in the Utah Theater.