Salt Lake City developers look to create the Post District: a neighborhood where one didn’t exist before 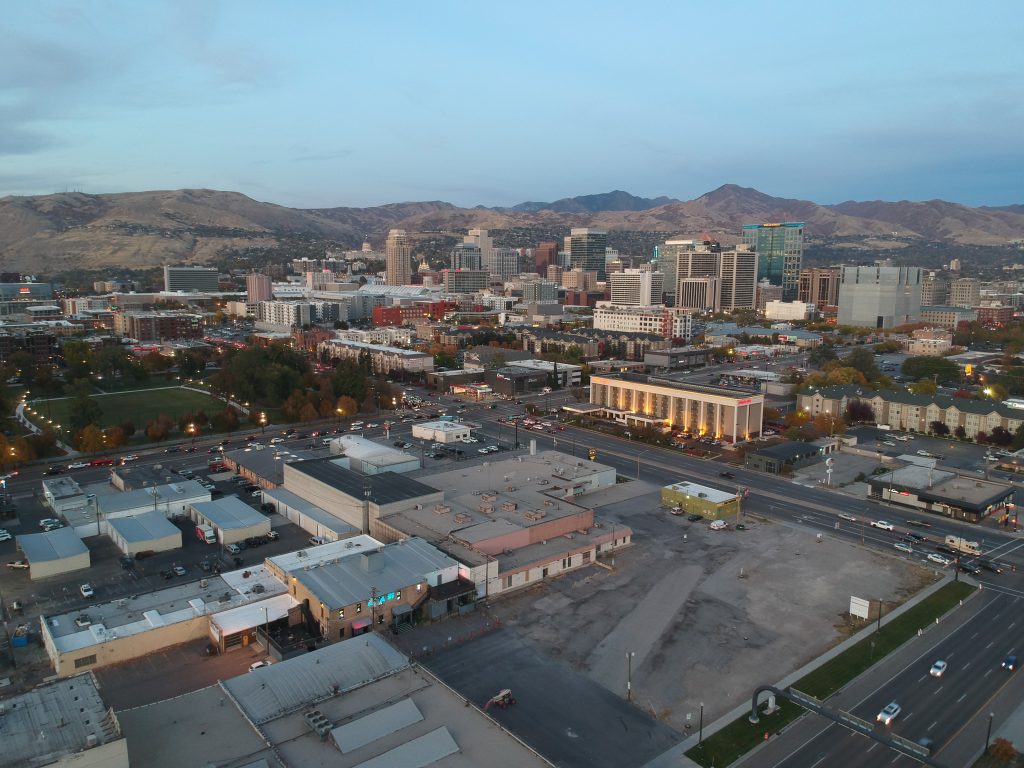 There’s a good chance you don’t know where the Post District is.

Commuters headed out of Downtown for I-15 may glance at the big billboards as they breeze past 13 acres of vacant land and grey warehouses on their way onto or off of the interstate.

Most residents have little or no reason to hang out there. And, for all intents and purposes, the Post District doesn’t really exist at all today.

But a trio of developers is looking to take advantage of financing incentives in the 2017 federal tax bill to create what amounts to a new, master-planned neighborhood on the fringe of Downtown Salt Lake City.

“We’re primed to see something happen and see it happen fast,” said Brandon Blaser, a Utah native and one of the developers. “The money is in the bank.”

Blaser has spent two decades out of state developing major projects across the country before he returned to Utah recently in time for what will be a frenzy of development along the Wasatch Front and particularly in this area.

The Post District gets its name from the Newspaper Agency Corp. building that sits at 400 West 500 South. The 13 acres that will be developed also crosses north over 500 South and includes historic buildings that will be renovated to keep their charm.

The district will include a combination of adaptive reuse and new buildings north and south of 500 South, with at least 500 multi-family residential units and 300,000 square feet of office and retail space, including restaurants and bars.

Residential units, Blaser said on a recent tour of the property, will span the spectrum from affordable micro-units to luxury penthouse-style homes.

The site is split between 300 West and 400 West by Gale Street, a narrow and apparently private through-way that will become the walkable focal point of the development.

While there was some confusion with the city over whether Gale Street is, indeed, private property, that designation would make it easier to close the street for events and street festivals and to do any other street experimentation that’s rare in Salt Lake City.

Gale Street will be developed as a woonerf, a type of people-first livable street with very low speeds. It will also allow cars, though, Blaser says, “cars will take a backseat” to people.

Through-ways will also connect to 300 West between the buildings, with more retail wrapped around three levels of parking on the northeast corner of the site south of 500 South. (See the map below).

During a recent tour and interview, Blaser stressed the development’s adaptive reuse, noting that five existing buildings on the site will be retrofitted, and no two buildings will be designed alike by different architects.

“You destroy the soul of a city when you knock down every building,” Blaser said, who added that the development will include space for artists who currently work in the area.

Because of the tax credits and designation of the area as an opportunity zone, the Post District — as well as the Granary District to the south — will likely be redeveloped rapidly over the next five years.

“When you’ve got the ability to control and master plan a big space like this, you’ve got an opportunity to move the needle,” Blaser said.

Issues to overcome (or live with)

Some of the site’s obstacles are apparent when one tries to arrive. In this case, by bike during rush hour on a night when the Utah Jazz were playing at home a few blocks north.

Two of the district’s four boundaries — 500 South and 600 South — are owned by the Utah Department of Transportation and managed in a way that prioritizes vehicle traffic above all. In addition to making it tricky to reach from Downtown, that lowers any chance of mid-block crossings at Gale Street for people who would likely rather not spend an extra five minutes crossing the street each way by walking to the intersections at 300 West or 400 West.

Salt Lake City has prioritized the redesign of 300 West from 500 South to 2100 South in 2021 in an effort that, as long as the next mayor is committed to complete streets, should provide more space for people outside of cars.

The developers are designing the site as though UTA will build a TRAX route on 400 West, the district’s final and arguably least problematic boundary.

Using Gale Street as a walkable, bikeable local street should provide respite from the cacophony of cars on the northern and southern ends.

The site will also be built around its second issue: massive billboards on all corners.

Because of the power the site’s predominant former owner — Reagan Outdoor Advertising — has amassed via the Utah Legislature, relocating the billboards is an impossible option. So they’ll remain on-site, Blaser said.

“In our current plans we need to…assume that they exist,” he said. “Is there a chance to bring them down? I don’t think so.”

For ideas of what the master plan will look like, Blaser pointed to the successful revitalization of the River North Art District in Denver, Pearl District in Portland, Amsterdam and other cities for inspiration that he said would be imported into the project.

“We’re trying to imitate,” he said, “but not replicate.”

His partners at Industry SLC played a role in developing Denver’s successful RiNo District. They’re well underway on redeveloping a large warehouse near 500 West 700 South, in the Granary District.

Expect to see this area redevelop quickly, with work already underway on an existing building and new development starting in early 2020.