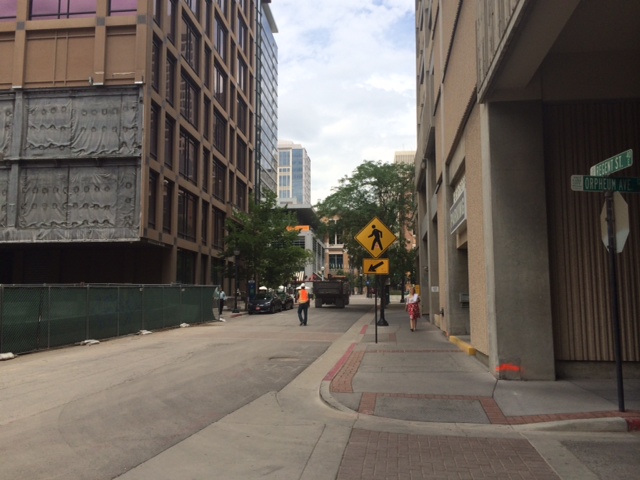 It may have taken a global pandemic, but people in Salt Lake City will get better access to their streets in response to the spread of COVID-19.

People will no longer have to push a button for permission to cross the street at 70 Salt Lake City intersections Downtown and in the East-Central neighborhoods, the mayor announced Tuesday evening.

That change could precede others that are being studied by the Transportation Division to free up space in the right of way for people exercising.

Building Salt Lake asked Mayor Erin Mendenhall on Monday whether she was considering giving pedestrians automatic “green lights” to cross city streets, rather than requiring that they push a button, which could be a source to spread the coronavirus.

“Starting today 70 of our City’s most heavily trafficked crosswalks will come on automatically—meaning you don’t need to press the buttons,” Mendenhall wrote on Twitter the day after Building Salt Lake asked if she’d implement the policy.

The change applies to intersections at city-owned streets from 400 West to 900 East, North Temple to 600 South. It does not apply to roads owned and managed by the Utah Department of Transportation, which historically has planned first and foremost around keeping cars, rather than all people, moving.

The mayor’s declaration puts in place something that’s standard practice in cities and urban areas that prioritize people outside of cars. Rather than require people to locate and push a button to activate a signal that gives them the right of way to cross at intersections, signals at the 70 intersections will automatically give the walk signal.

That’s already in place at many, but far from all, intersections in Downtown Salt Lake City.

The city’s transportation division, meanwhile, is considering another change in response to COVID-19.

The department is working to potentially open streets across the capital city for people to walk, bike or roll in the street while keeping a safe distance from each other.

The narrow width of sidewalks throughout the city forces people to either pass each other at a dangerous distance or step into the street to avoid the virus’s potential spread.

The concept of opening space in the right of way to people outside of cars has already been implemented in cities across the world as people realize that, with far less vehicular travel, they could use the extra public space.

Salt Lake City is coming at it from a physical and mental health perspective.

“It is really important that we give people room to be able to safely walk and bike and get some exercise,” Jon Larsen, the city’s director of transportation, said in an interview. “On a lot of our sidewalks, you can’t pass someone without violating the social distancing.”

Larsen made clear the city hadn’t decided which streets could be opened for people, when or in what ways. He said his department was looking at areas that would connect to parks, trails or open space.

That could make streets near Liberty Park — such as 600 East and 900 South — good candidates to either close the streets to thru-traffic (600 East) or remove a lane and dedicate it to people outside of cars (900 South). 600 East, one of the city’s few neighborhood byways, is already low-traffic and low-speed. 900 South carries more traffic but has six lanes dedicated to cars between 700 East and 500 East north of Liberty Park.

The city could also look at streets that are already highly pedestrianized, like Main Street and 300 South Downtown.

Larsen also made clear his department was looking at opening space citywide.

“The mayor’s office, I think, liked the idea and said let’s keep figuring out how to” make it happen, Larsen said. “We want to do this right. Also recognizing that time is of  the essence.”

The mayor’s administration is talking with City Council and doing outreach to local community councils for feedback to the idea.

We reached out to several councilmembers.

“I love the idea,” west side Councilman Andrew Johnston said. “There’s plenty of precedent around the world to opening streets for non car use for special events (even we do it all the time for festivals).”

He added that he could see this as a precursor to eventually closing streets full-time in Salt Lake City.

“As we gain density and full time residents downtown I could see this idea happening more often to create more public spaces for people to enjoy urban living,” Johnston said. “Let’s test it now while we have low car volume downtown anyway!”

Councilwoman Amy Fowler, who represents Sugar House, said she was interested in the concept.