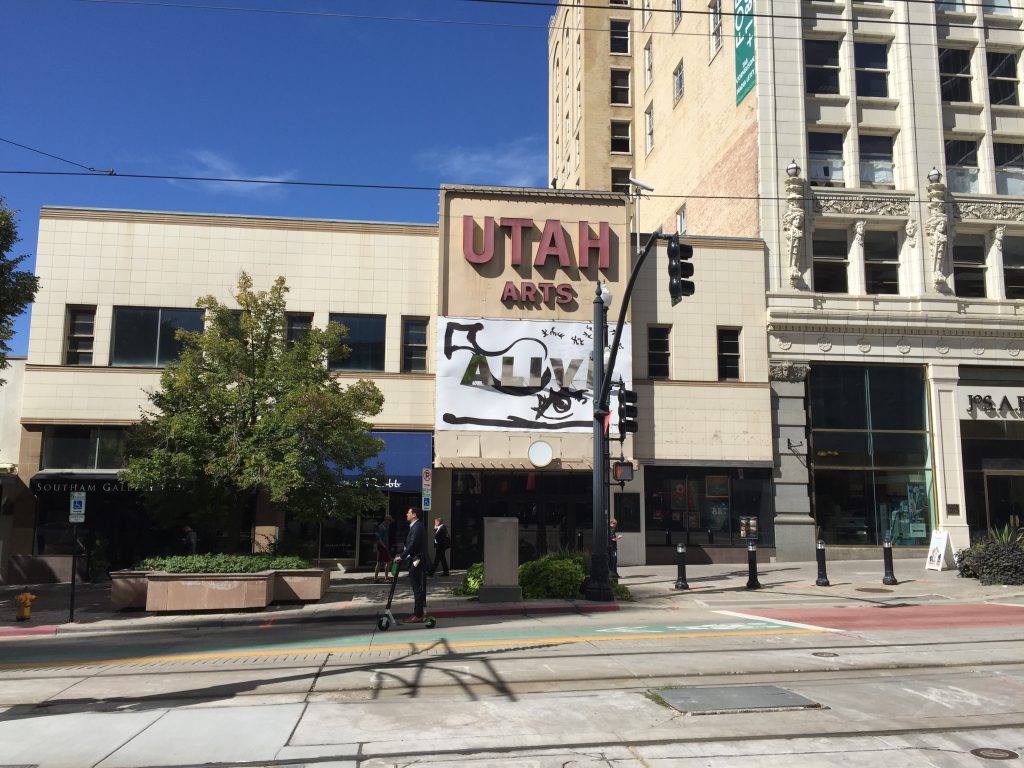 The city is ready to drop the final curtain on Main Street’s historic Utah Theater.

Redevelopment Agency staff are presenting a memo to the RDA Board today that recommends that the theater property, including three retail spaces at 144 – 158 South Main, be sold to the adjacent landowners who intend to demolish them all.

Hines Interests and the LaSalle Group, in exclusive negotiations with the RDA, plan a 375-foot, mixed-use, mostly-residential tower, with a walkway and plaza open to the public.

In 2010,  the RDA purchased the theater for $5.5 million from Rick Howa, a local developer. It has tried ever since to find a way to restore the theater and attract developers and tenants.

It is ready to give up.

The RDA successfully financed the $125 million Eccles Theater up the street and a $.5 million per year Downtown arts promotion program called “The Blocks.”

Why not the Utah Theater?

RDA COO Danny Walz wrote to the city council that the “RDA has engaged a variety of potential end-users at the local, regional, and national level, including entertainment, theater, media, events, hotel, office, and institutional companies and developers. These efforts have not yielded an end-user that is willing and able to partner on rehabilitation of the theater.”

Without “monumental public investment,” he states, the restoration of the theater is impossible.

•Lack of historical integrity. The theater, originally built for vaudeville in 1918, stood out for its ornamentation in the Pantages chain (along with its twin in Minneapolis – see photos).  It became a movie house in the 1930s, and in the 1960s was split into an upper and lower theater.

This last transformation ruined significant architectural features by removing viewing boxes and cutting through the upper balcony with an escalator. Since then, the Tiffany skylight was restored during Howa’s ownership. But so many of the integral historic features were lost that the building does not qualify for the national register of historic places or significant federal tax credits.

•Cost of seismic upgrades and restoration. Estimates in 2014 saddle the theater with $14-20 million price tag to bring the building up to code for a theater or restaurant use. Restoration of the theater’s remaining historical elements was estimated at $42 million.

•No end user willing and able to bear significant costs in the restoration.

Building Salt Lake asked former RDA board members and staff what went wrong in the 9 years the city has owned the theater.

In addition to the current RDA reasons listed above, the following were mentioned:

•Missed opportunity to include the Utah Theater in the bond that built the Eccles Theater. Repayment of that $125 million bond currently runs the city $8.5 million a year. For the sake of restoring the Utah Theater, could the RDA have sustained another ~$1.5 million yearly debt service on that 20-year investment?

•No sustained appeals to philanthropists. The George S. and Dolores Doré Eccles Foundation contributed $15 million to the Main Street theater that bears its family name. Spence Eccles, legend has it, worked at the Utah Theater as a teenager.

He told at least one RDA staff that requests about the Utah Theater should wait until the bigger Eccles Theater project was done. Current and former RDA staff confirm that a second approach to the Eccles Foundation was not made.

The Utah Film and Media Arts Center proposal from Salt Lake County, Utah Film Center, and Spy Hop fell through on the issue of the restoration of the entrance hallway, which was not part of the proposal’s plans.

The monetary cost of restoring and reusing the Utah Theater is high, perhaps $100 million.

Might its intrinsic value, as the last of our fancy 19th-century theaters, make “monumental public investment” the right thing to do?