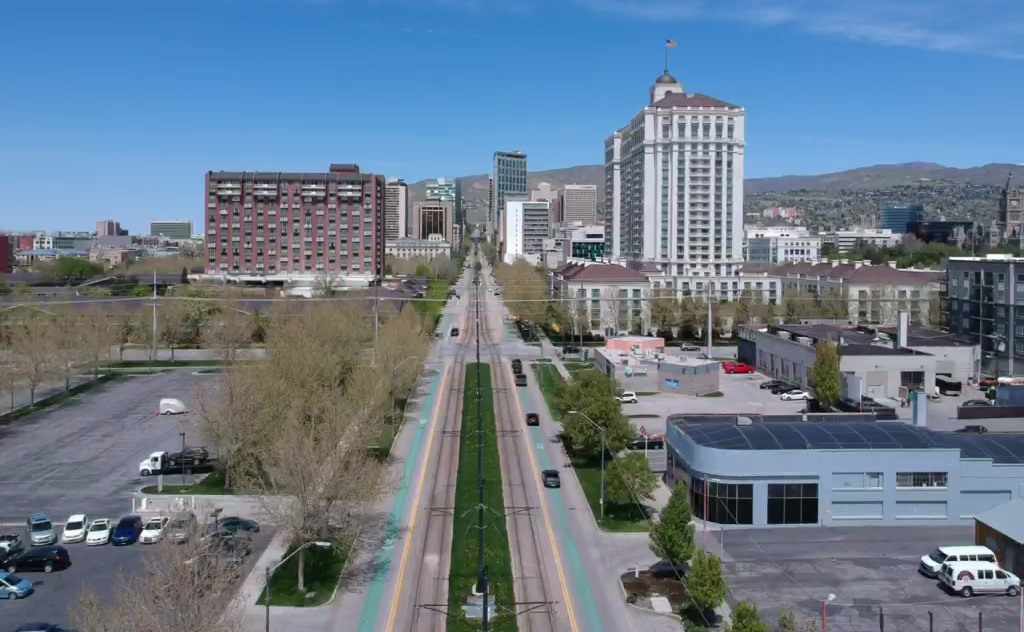 New multi-family buildings, 320,000 square feet of Class A office space, imminent development of the Sears block and the Fleet block – all point toward a maturing market and new urban energy for a neighborhood hampered by mega-blocks and orientation towards the interstate.

A new Trax station at 650 South Main (see photo above) is being considered by the city’s Redevelopment Agency and UTA, who are anticipating increased demand from new workers and residents.

Two sizeable new developments, one office and one residential, will light up South Main.

650 South Main, a 10-story, 320,000-square-foot office project by Patrinely Group, with oversized floor plates and extended ceilings, will replace a parking lot on the west side of Main. 6th and Main apartments, by Lowe Property Group, will demolish the AT&T store and the Infinity Event Center (and its retail space, currently Chedda Burger).

At 85 feet tall, 6th and Main had to appeal to the planning department for an exception from the requirement in D-1 zoning to build at least 100 feet on corners, so it is officially a Planned Development. The new structure will be five levels of framing on three levels of podium (appearing 7 stories), offering 175 luxury residential units from 770 to 1,236 square feet with a mix of 82% one-bedroom and 18% two-bedroom flats.

The applicants were limited to a parking maximum of .5 parking stalls per unit (113) but successfully petitioned to raise that number to 220, all to be structured within the building’s footprint.

650 South and 6th and Main will join two Wasatch Residential properties in the neighborhood’s newcomers’ club. Garden Lofts at 154 West 600 South (under construction) and 6th and Main’s immediate neighbor, 600 South Lofts at State Street, are both mixed-income apartments.

The potential for transformation of the area is demonstrated by developable properties in red. They include surface parking lots, vacant properties, and incompatible uses (i.e. auto-oriented businesses).

Many people’s eyes are on the development of two nearly 10-acre parcels in South Downtown: the Sears block and the Fleet block. Between 400 and 300 West, and 800 and 900 South, the Fleet block has been vacant city-owned property since 2008. In a report from 2018, consultants noted up front the community’s “strong enthusiasm for a future innovation district.”

Development recommended for the Fleet block includes live-work units for purchase, market-rate and affordable apartments, 94,000 sf of office, and 685 on-site parking stalls. It is unclear whether the project would be done by a single development team or parceled off to different builders.

The Sears block has long been owned by Gershman Properties, a real estate investment and management firm based in Los Angeles. A local developer, listed as 700 GS, has bought out Sears’ long-term lease with Gershman, and is in the conceptual design stage for 8 acres of the 10-acre block.

In recent years the Sears block has been graced only by intrepid taco carts on Main Street and 800 South (Mi Favorito and El Rey), and on its busy State Street edge. 800 South and State hosts two popular taqueros (Toro and Don Rafa). At 700 South and State, the upscale restaurants Sapa and Purgatory contribute to a very promising corner anchored for years by Retrospect Water and Light.

Sapa is becoming a player in the area, having broken ground on Food Alley across State Street at 900 South.

Deseret Mortuary on 700 South was recently demolished; the land is owned by Suburban Land Reserve, Inc., a commercial affiliate of the LDS Church.

At the date of posting, the city has received no applications or proposals for the former Sears property. According to the city, the Deseret Mortuary property will comply with zoning regulations to install landscaping on its newly vacant lot.

Why has development been so slow?

Existing zoning for South Downtown tells part of the story. Is the area overzoned?

D-1: Maximum height 100 feet if not on corner, 375 feet on corner, higher with city review. No minimum lot area, except on corners. Parking lot must be behind, below, or obscured on side of buildings.

One of the consequences of over-zoning is the tendency to drive up land value, as the parcel gets seen for its developable potential. In the case of South Downtown, a disconnect between perceived value due to the uses and heights allowed by zoning and the blight of the neighborhood may be a significant barrier to development.

The area has suffered land banking, too. The largest property owner in the area has been Sinclair Oil (owners of Little and Grand America and blocks south), which had a no-sell policy for decades until its founder, (The) Earl (of) Holding, died in 2013.

How would the area be different, had then-Real Salt Lake owner Dave Checketts gotten his first choice of stadium locations on Sinclair’s property on the 650 South Main/Master Muffler block before moving to Sandy?

While occasionally renting out its buildings, Sinclair has generally been satisfied with keeping most of them off the market, vacant, and boarded.

UDOT, like Sinclair, has had a disproportionate impact on the area. 500 and 600 South, each with five lanes of one-way car traffic and two lanes of car parking, are basically on- and off-ramps for I-15 and I-80. In addition, West Temple, owned by the city, is nine car lanes (counting parking and center turn lane) with no bike lanes. Not coincidentally, it meets with I-15 at 900 South.

The result of the current design of 500 and 600 South is the loss of human scale and north-south connectivity to and from South Downtown. A harsh and dangerous environment awaits people walking and biking, contrary to the city’s plans and policies.

Two planning documents and a new Redevelopment Agency Project Area might lead the way. Salt Lake City’s 2016 Downtown Plan and Life on State offer some incremental proposals. The new RDA Project Area, still being negotiated with the Salt Lake City School District and other taxing entities, is large, capturing roughly half of South Downtown. It could bring major new vision and investment to the area.

Major streetscape improvements are coming on State between 600 and 900 South. We will soon see $4.8 million spent on this three-block stretch, thanks to Salt Lake County and Salt Lake City. Visioning documents include a planted median, widened sidewalks, curb extensions, bulb-outs, and enhanced crosswalks.

There’s not much else going on in the public way. The Downtown Plan of 2016 addresses South Downtown in a limited fashion. Emphasis is on 500 and 600 South, envisioning “Grand Boulevards” that serve both vehicle throughput and neighborhood accessibility. For years the city has been courting hotel owners to invest in a property tax assessment district to pay for the transformation.

Besides reinforcing the auto-dominated status quo on 500 and 600 South, the Downtown Plan expresses aspirations to a vibrant residential, entrepreneurial, research, and business district. Envisioning an innovation district and a university research campus, the plan hopes for “housing choice” in “low rise dense developments” on interior streets and walkways. Signaling the city’s desire for affordable units, “family housing” is mentioned.

The question for policymakers is whether South Downtown is prepared to receive the investment that’s coming while moving toward the urban form desired in the city’s plans and ordinances.

One measure is the condition of South Downtown’s streets. Are they prepared to improve on the current transportation mode share? For people moving to and within Downtown, 60% of trips are made by car, 20% by walking, 9% by transit, and 5% by bicycle (SLC, 2014).

South Downtown lacks an on-street bike network, as only three of its 11 streets have bike lanes. From this perspective, car trips would significantly increase with intensified development in South Downtown as currently configured.

Another measure might be, What would the neighborhood look like if the development potential on every parcel were maximized? Most of South Downtown is currently zoned D-1 and D-2. Here is a graphic of permitted versus actual building heights, South Downtown circled in green.

Virtually all structures in this 20-block, 2,000-acre area are under-utilizing their base zoning.

The potential for South Downtown’s transformation is great. Whether Salt Lake City is ready for it is an open question.