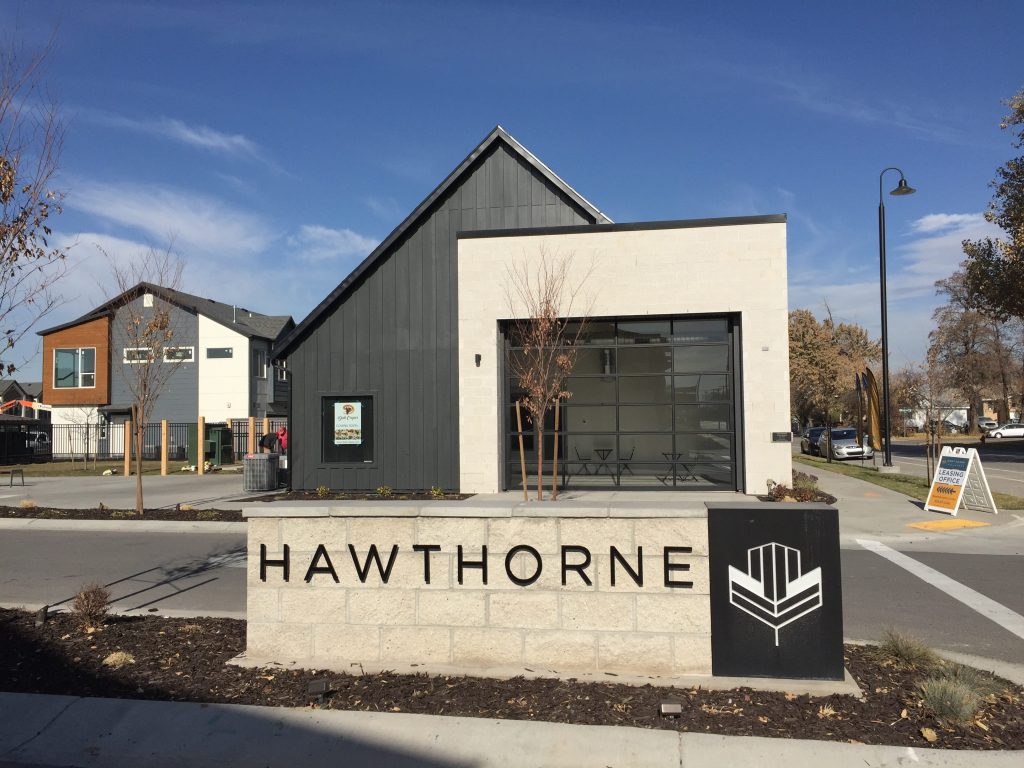 Salt Lake City is becoming a destination for out-of-town developers who pride themselves on quality design and the re-purposing of historic buildings.

Lake Union Partners, a 10-year old, mid-size development firm from Seattle, is not alone in seeing potential in the Salt Lake area – and is constructing both residential and commercial product in notable ways.

INDUSTRY SLC, from Denver, also is investing in the Granary District in an unprecedented scale with adaptive reuse of some of the area’s stock of warehouses and manufacturing sites.

Lake Union Partners will also start rehabilitation and reuse on five existing buildings in the Granary District, starting in January 2020.

The real estate listing for Hawthorne’s property, the former Buehner Block manufacturing site, claimed it was entitled to over 1000 units on its 19.28 acres for $9.5 million.

In the early 1960s, Buehner Block was advertising their contemporary design construction products in the local press. The following appeared in the Salt Lake Tribune, where they called it “The Luxury Look.”

Why did the new owners of the 19 acre property opt for only 218 units, instead of maximizing development potential of the site?

Newton Breiter, a development manager for Lake Union, told Building Salt Lake that it was extremely appealing to build townhomes in an emerging neighborhood “like an original suburb.”

“Safe, secure, remote, quiet” were the words he used – adding that use of “the existing street grid and offering and a network of open spaces” was also important to their investment.

Hawthorne is a gated community. Designed with an internal north-south, east-west grid, it has three access points to the public right-of-way, all on West Temple.

Many recent townhome developments in Salt Lake seem to be marked by limited shared space, ample asphalt, and garage doors.

Hawthorne offers two-car garages for every unit. Breiter mentioned that the garages are alley-loaded, drawing attention to designers’ attempt to encourage neighborliness in shared spaces.

Hawthorne’s townhomes are two and three bedroom rental units, with a current average of $1786 in rent. Their units range from 1121 to 1537 SF, from two to three stories.

According to Jennica Stevens, Business Manager at the project, they have adjusted rental rates for some units slightly downward to remain competitive in the surrounding market.

Currently, their rental rate averages $1.40 per SF. 42% of their units are rented – even as only two of the four phases of Hawthorne are completed.

According to Stevens, many of their recent inquiries are coming from current Downtown renters who are looking for more space. Two-car garages – included in every unit – may be a part of that appeal.

Lake Union is hesitant to reveal at this point its specific interests in the Granary District. Yet it tells Building Salt Lake that five buildings will be developed, some in partnership with the EVO ski and snowboard company out of Seattle, as an outdoor recreation campus.