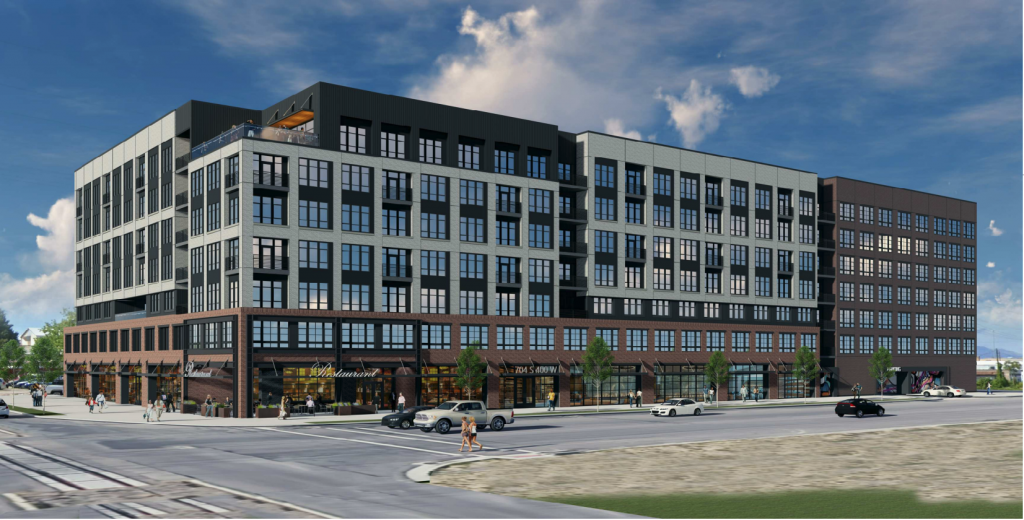 Since its designation as a tax-friendly zone for investors, it’s only been a matter of time before projects start to stack up in Salt Lake City’s Granary District.

It appears the time has come.

A number of projects are in the queue for development, many of the retrofits of existing industrial buildings, in the area southwest of Downtown.

The latest proposal, known for now as Pacific Yard, would bring a seven-story mixed-use building at a key corner in the neighborhood, 704 South 400 West. That puts the building near what is becoming the heart of what will be a rapidly changing neighborhood.

The building would contain over 6,000 square feet of retail, leasing and amenities space on the ground floor, plus two levels of parking containing 215 stalls. Above that would be 292 rental housing units.

Units would primarily be one-bedroom, plus a few dozen studios and two-bedroom homes.

The developers say they’re paying homage to the neighborhood’s history by designing the ground floor to reflect the site’s industrial past and present. Pacific Yard would replace a steel manufacturer.

“Pacific Yard creates a new project that harkens to the past by creating a warehouse experience on the ground level to interact with the streetscape in a vibrant and authentic way,” the developers wrote in their application.

While the city and state all but guaranteed the area would see a rush of development, zoning in the Granary remains primarily the auto-oriented General Commercial (CG).

That zoning limits heights to five stories and no more than 60 feet, which encourages five-story buildings with no realistic ground-floor retail space.

Urban Alfandre is submitting a design review application to request multiple changes to the zoning, including:

The commercial space will be oriented toward 400 West, with leasing and tenant amenities fronting 700 South, according to the plans.

Pacific Yard is being developed by Urban Alfandre, a Building Salt Lake supporter.

The area is currently considered moderately walkable, very bikeable and served fairly well by transit, according to WalkScore.

That’s likely to change as the surrounding neighborhood is teed up for redevelopment within the coming three years.

Changes in the Granary

Across the street from Pacific Yard is the Granary Campus, which includes an evo retail store, evo Hotel, skatepark, bouldering project, Level Nine Sports, an art gallery, and other unknown retailers, according to Kier Construction.

One block west is the Industry SLC building, which is slated to have over 300,000 square feet of office space upon completion. That building, a retrofit project that broke ground in 2019, promised to act as a catalyst of rapid change in the area roughly between 600 South and 900 South, I-15 and 300 West.

The neighborhood is isolated from Downtown by three viaducts catapulting vehicular traffic into the area off I-15 on 400 South, 500 South and 600 South. Salt Lake City also operates 300 West as a nine-lane highway in the area, and traffic lights on all north-south streets favor commuters going to or coming from the interstate.

That all discourages foot traffic heading north and east, though entry from the east is possible on 800 South, and painted bike lanes were recently added on 700 South.

The team at Industry also recently won approval for a massive parking garage with nearly 1,000 parking stalls that will be shared among the existing and incoming office space and anticipated housing.

Blaser, who is the developer primarily responsible for master planning what he’s calling the Post District north of 600 South, now owns most of the block that includes Pacific Yard.

Needless to say, the Granary District is rapidly shedding industrial users in favor of modern office space and incoming residential.

They’ve been drawn by the 2017 creation of what are called opportunity zones, or OZs, which provide financial incentives to those who invest in set areas across the country.

We’ll keep you posted on projects in the Granary as they come up. Should be any day now.