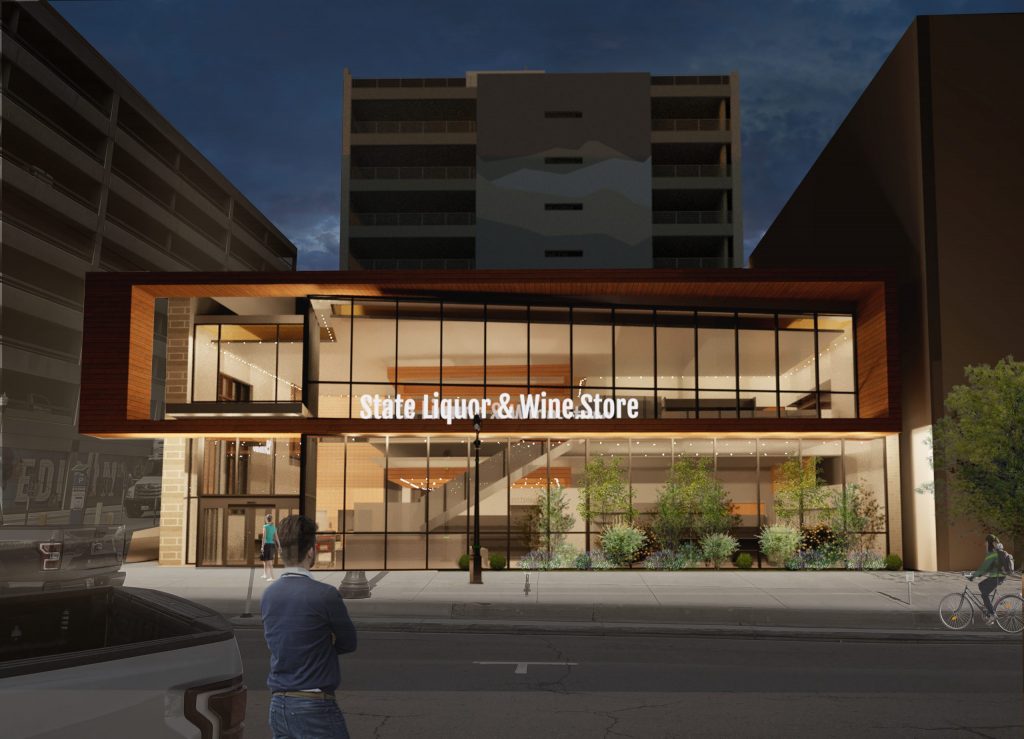 For a thorough list of projects in any neighborhood, Building Salt Lake Members can use the Enhanced Search function to find stories about projects in neighborhoods they’re most interested in.

The Department of Alcoholic Beverage Services is backing down from a plan to build a 10-story parking garage onto one of Salt Lake City’s walkable mid-block streets.

Saying it had “heard the concerns of business owners and other community members,” DABS said it would build the two-story liquor store without a parking tower that would have had no ground-floor retail space.

That leaves Edison Street with the prospect of a much smaller surface parking lot than what exists today, and without a parking tower looming over the revitalizing street. It will also have an impact on at least two residential projects nearby.

“The downtown liquor store is moving forward and we’re hoping to break ground before the end of the year,” said Tiffany Clason, director of the Department of Alcoholic Beverage Services (DABS). “The plan to include a large parking structure will no longer proceed and we will instead move forward with a surface parking lot only, located directly north of the new store.”

It’s not immediately clear how big the new parking lot will be.

The change comes after bids for construction were twice the state’s budget for the project. It has been working for months to find a contractor who could trim costs and salvage the tower.

The state had maintained it needed to build so tall because the parcel is relatively narrow and that it wanted to maintain space for state employees at the Walker and Wells buildings across the street and share space with an upcoming residential development next door.

The state said its plans for the store were unchanged. The new store will be a stone’s throw away from an existing state store, a quarter-mile east at 255 S. 300 E.

“The DABS is excited for the new downtown store. It will be in the center of our downtown, serving Utahns and tourists, providing a comfortable shopping experience,” Clason said. “The new store will have the space needed to accommodate a broad variety of products and feature locally made items crafted right here in Utah.”

Clason said the store would sell items not available a block east.

“The large, modern downtown store will complement the boutique neighborhood store located nearby on 300 East, which largely serves wine connoisseurs seeking specialty products not available at other locations,” Clason said.

What about Moda Luxe and Ivory?

In addition to being good news for Edison Street, it’s not clear what this means for two other developments in the immediate area.

The state was also looking to partner with the developer Ivory Homes to split and save costs for an undisclosed development next door.

Construction of Moda Luxe, another mixed-use residential development north of the Ivory Homes property, has apparently stalled in the months that the state’s plans for the parking tower were being discussed.

It appeared the parking tower would have obscured the western view for Moda Luxe. It’s not clear whether that’s why the project has been slow to get off the ground. Representatives of JF Capital, the developer of Moda Luxe, haven’t elaborated publicly on the status of the project.

An Ivory Homes representative declined to comment on the company’s plans for the site and whether the loss of the shared parking tower will impact it.

Ivory has long been expected to create a mixed-use project that wraps around the corner of 300 S. 200 E. and extends north toward Moda Luxe. Its properties include the site of the long-time book-seller, Ken Sanders, who found space in the Leonardo. Sanders will continue to occupy his long-time home of 25 years for another year or two, possibly longer.

Ivory may either need to dig down or build up to provide parking. Either way, parking is an expensive commodity, and losing a partnership with the state to share costs will certainly drive up costs.

Editor’s Note: This story was updated to reflect that the legendary Ken Sanders is not a “former” bookseller. He is an active and still legendary bookseller, still located 268 S. 200 E. and may move to the Leonardo in the future.