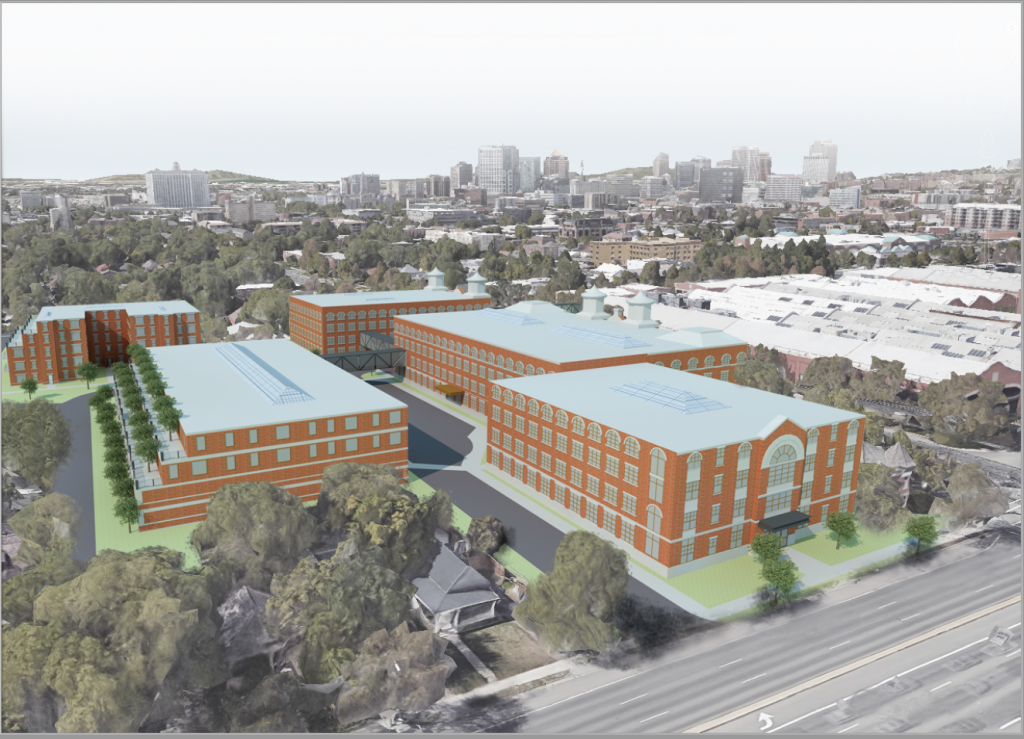 In a meeting that lasted over five hours, various stakeholders gathered last Thursday for a work session with the Historic Landmark Commission to discuss a proposed mixed-use development of 3.5 acres on the 600 South block of 700 East.

Nothing has been approved and the developer, Khosrow Semnani of Trolley Square Ventures, will still need approvals from the HLC and City Council.  Semnani is requesting approval for new construction in a historic district and a zoning change to build six mixed-use and residential buildings.  Semnani owns the Trolley Square Mall, directly north of the project, and intends to incorporate his proposed development with the historic mall.

“We’re hoping that you will consider the balance between the interests of preservation and the interests of growth and development. We think this project has a huge upside for the neighborhood,” said Allen Roberts, of Cooper Roberts Simonsen Architects (CRSA), an architectural firm which specializes in historic building restoration and sustainable architecture.

Proposed renderings are based on the Utah Exposition Building, which was built on the site in 1888.  Designed by prominent architect Richard K.A. Kletting, the building was used for the territorial fair.

Semnani told the commission members that his vision for the development is to restore the area to its former glory and “make something that for Trolley Square is compatible and it really makes a place for people to come and see it.”

“I want to get rid of that parking lot.  I really want to change that place, to bring it back,” said Semnani. “Today, there are few places that the people and visitors come. I want to see Trolley Square be that. We cannot compete with the City Creek.  We are not, I repeat, we are not Gateway.  It has to be its own.”

The developer wants to change the zoning for most of the parcels from Multi-Family Residential District (RMF-45) to Form Based Urban Neighborhood District (FB-UN2).  The FB-UN2 zone allows for heights up to 50 feet and eliminates the need for setbacks from the property line.

The preliminary plans submitted to the HLC for the work session call for five buildings replacing the surface parking lot and a sixth building proposed for a separate parcel at the southeast corner of the intersection at 600 East and 600 South.  As currently proposed the buildings will be a mix of four and five stories.

A central point of contention with neighbors is the proposed building height and the potential uses allowed under the FB-UN2 zone.  Semnani told the commission that he would be willing to lower the height of the two buildings proposed for the south end of the project area along Ely and Sego if he could increase the height of the buildings along 600 South.

To alleviate neighbor concerns, the developer plans to enter into a development agreement with the city to ensure that he can build only what the city approves.  Current proposed uses are residential in all six buildings, and ground floor commercial including a ground floor hotel in the two buildings fronting 600 South.

One commission member pointed out that the proposed development agreement may need to be changed so efforts won’t be hampered by height limitations.  Several commission members emphasized the importance of maintaining the residential character and conformity with the neighborhood at large.

There will be several more opportunities for community input.  City Council will hold a public hearing on the requested zoning change during their formal council meeting on December 13 at 7:30 p.m. in the City County Building.  Before developers can start construction they will need to return to the HLC for a public hearing and final approval.

*Isaac Riddle contributed to this story