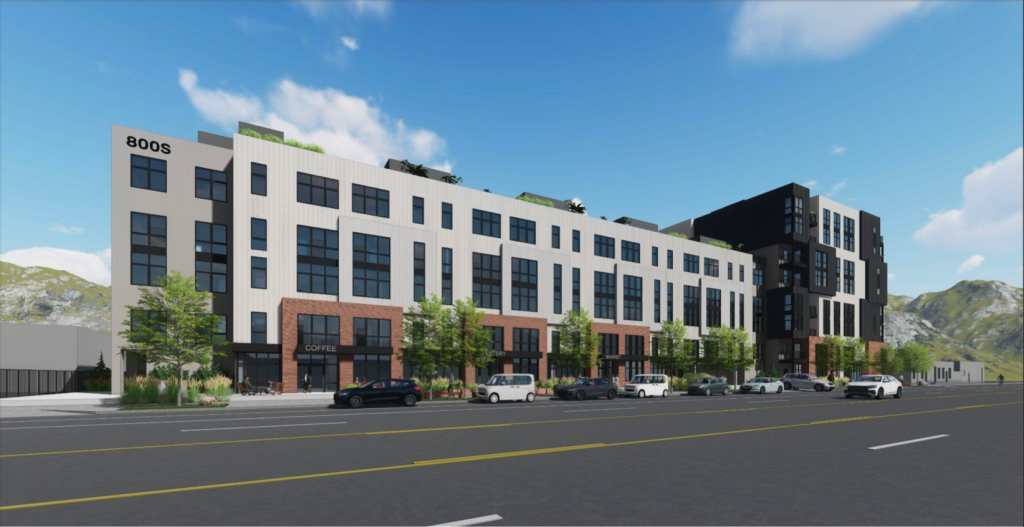 Developers are continuing their rush of construction in the Granary District, with two new mid-rise, mixed-use projects proposed in recent weeks.

One, near Fisher Brewing, knocks on the door of the all-ages music venue Kilby Court. But the developer has promised to keep the venue and open up foot traffic between it and 800 South.

The other will continue the rapid buildout of the neighborhood’s core, as the investors that rushed in to back transformative projects in the Granary continue to break ground.

A new proposal at 800 S. 330 W. is being called simply 800S at this point. It would be a large-footprint, mixed-use residential building replacing several existing warehouses and adding a mid-block walkway that better connects 700 South with 800 South.

The parcels in the project span 2.34 acres and two zoning types: General Commercial (CG) and Downtown Support (D2). That split-zone means the project requires approval via the city’s design review process to build the eight stories and 86-foot tall building.

The new building would include 6,440 square feet of retail, 3,120 square feet for a lobby, resident amenities including a pool, and 336 new residential units.

“This site is unique in that it is adjacent to and provides access to the existing Kilby Court music venue,” the developers wrote in a design review application.

The developer plans to provide a mid-block walkway that allows for foot traffic between Kilby Court and 800 South, “reinforcing the music venue as a destination within the existing neighborhood.”

Mid-block walkways are a tool to deal with the 660-foot blocks in Salt Lake City. By opening up passageways with multi-use trails, there are more potential connections between people walking and biking through a neighborhood.

The walkway at 800S will be privately owned but open to the public, the developer said.

The developer is Convexity Properties, which is actively building a high-rise residential tower at 275 S. 200 E. Downtown.

The Chicago-based Valerio Dewalt Train designed a building with multiple distinct blocks, with a brick-clad first two stories and multiple material and massing changes throughout.

A breakdown of unit sizes wasn’t given, although the application said the building would be a mix of studios through three-bedroom apartments.

The wrapped parking garage would be accessed by a single entrance off 800 South. The garage would include 291 parking spaces (fewer than the 310 spaces allowed by the city’s outdated parking ordinance). While the developer is required by city ordinance to provide space for just 14 bikes, 800S would have 98.

The developer needs permission to build more than 60 feet. Buildings can be up to 90 feet tall if they obtain approval through the design review process.

That’s likely to happen after trips to the Planning Commission and City Council, which have already looked favorably on similar mid-rise projects in the Granary.

The next phase of the Industry SLC block of development includes a mixed-use residential building with two-story ground floor retail space at 675 S. 500 W.

Industry is the brand for the mixed-use neighborhoods built in Denver and now Salt Lake City by the team Q Factor.

A design review and planned development application filed with the city provides some details.

The design review application didn’t provide a specific parking count, though renderings show the building, which is being built next to a seven-story Industry parking garage with nearly 1,000 stalls, includes four levels of parking. It appears the building will provide one-for-one parking.

“Our proposed addition to the District and the fabric of this neighborhood is our project, tentatively called Alexan Granary, which will be located on a 1.36-acre site, anchored between 500w and Elder Court on 700 S,” the developers say.

Alexan appears to be a common name for apartment buildings across the U.S. that are tied to the investment firm Trammell Crow and Greystar.

It’s not clear why the Q Factor team behind Industry isn’t listed in the design review application, while the land is owned by Industry SLC, which was built by Q Factor. Regardless, the Industry group continues to keep charging in the Granary, including by proposing a significant change to the massively wide 500 West — the epicenter of Industry SLC.

Industry recently asked the city for permission to partially close the massively wide 500 West between 600 South and 700 South to create a linear park (green space).

That would be a better use of land than the 127-foot stretch of asphalt for what is and will remain a low-trafficked street. It would also contribute pervious green space to a neighborhood that’s clamoring for it.

“The proposal would remove approximately 70% of roadway and would reduce the public right-of-way to 50 feet in width from the current 127 feet of right -of-way.”

A 50-foot right-of-way would allow two 10-foot car lanes, 6-foot curbside bike lanes in each direction and more 9 feet for parallel parking, though the concept plan doesn’t include space dedicated for people to ride bikes.

Regardless of the details, the Granary is booming right now. Time will tell if planners or developers intervene first to follow the stated intent of the dominant CG zoning: “A hierarchy that places the pedestrian first, the bicycle second and the automobile third.”

Space for more than 1,000 cars has been provided. How much space will be added to satisfy the top rungs of the hierarchy?